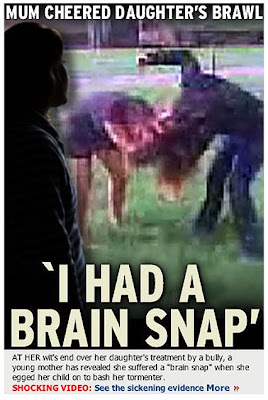 (Above: another inspiring, uplifting, surprising and delightful splash in a News Corp paper we're hoping will shortly be behind a pay wall).
The wash from John Hartian's speech continues to ripple through loon pond in a way that surpasses a brick being through through the window of a zero tolerance window.
Now it seems we must follow his injunction for clap happy stories:
Last week, John (Pollyanna) Hartigan of News Limited called for less political spin and more inspiring stories in newspapers. Less focus on the "politics of politics" and more "that inspires, surprises and delights readers".
These are subversive thoughts; surely this is not another News Limited plot to blunt the effectiveness of the government spin machine?

I think Hartigan has a point and Australia's political leaders should take a leaf out of his book.
So that means I can look forward to Piers Akerman's first happy story of a one legged one eyed lesbian learning to drive a truck, settle down with her partner in a campaign to save the whale, learn to enjoy sipping latte, and feature as the guest of honor in the head truck in the Mardi Gras?
In your dreams. This is Arthur Sinodinos, former chief of staff to John Howard from 1997 to 2006, and his obligatory tug of the forelock in Hartigan's direction is just good soft politics of a massaging kind as he challenges us to Learn from leaders who dare to dream.
Sinodinos wants us to go American, in that peculiar way that deluded Americans cultivate, about the way to the top - generally forgetting that along the way Death of a Salesman is likely to be the real cultural marker of their passage to the grave. But okay, attention should be paid. What's Sinodinos got to offer?
US leaders are better at mobilising inspiration, tapping a rich vein that runs deeply through Americans' psyche and preferred self-image. It is particularly appealing to the young, for whom life is full of possibilities. It also feeds the belief that in the modern age anything and everything is possible.
What? Like Barack Obama, whom I'm regularly told by fair and balanced reporting, has a glib, superficial rhetorical style, a smooth tongue that beguiles and manages to sound like Elmer Fudd or more painfully like a pale imitation of Martin Luther King? (Obama is no King, just a Fudd of a President by The Australian's in house smart arse Fred Pawle).
The most divisive president ever elected? And where does that leave John Howard, the most prosaic and boring speechmaker in recent political times, the strain in the voice never producing an aspirational or inspirational tone (unless you think shouting that we'll decide who will be allowed to come into this country and which losers will be tossed into the sea was inspirational).
After a couple of quotes - from John F. Kennedy and Ronnie Raygun - Sinodinos settles on Stephen Denning as his inspiration:
Stephen Denning, the Australian author of the international best-seller The Secret Language of Leadership, argues that successful leadership requires an ability to tell a story. Rational argument is not sufficient; the speaker must win the hearts of his or her audience and their minds will follow.

Stimulating a desire for change answers the why and rational argument provides the how. The way forward must be plausible, for example, it has been tried elsewhere and it has succeeded. A happy ending is important.
So what can we deduce from this?
Well firstly Adolf Hitler is clearly an ideal role model. A great speaker, who could always be relied upon to put rational argument aside, and win the hearts of his audience, and thereby capture their minds. Rabble rousing gets a new guernsey.
And Walt Disney - though he might have led an interesting if unhappy personal life - is the model for political leadership. Always with the happy ending. The wicked witch can never win, and things always turn out for the best in the best of all possible worlds.
Uh huh.
Why do I feel a case of special pleading coming on?
Last week's release of the Productivity Commission report on indigenous disadvantage was a golden opportunity to tell an inspiring story and redouble our efforts to make a difference to the indigenous condition.

I scoured the coverage for green shoots or rays of hope. I came across the odd article or mention of progress, but overwhelmingly it was a tale of woe. We should not trivialise the issues but we are in danger of analysis paralysis in this field.

Oh golly, no one came out with a story about Evonne Goolagong, Cathy Freeman or Albert Namatjira.
How about a little bureaucratic gobbledegook to counter that failure:
Framing the issue around ambitious intergenerational indicators dictated much of the media coverage, and that set the scene for reporting failure. It's an old political saw that it is better to under-promise and over-deliver than vice versa.

Indicators per se do not galvanise action, only the right policies and programs will. That is why inspiring stories of indigenous success are so important.
Right policies and programs will galvanise action. Or inspiring stories of success? Or fuzzy warm thinking?
What follows is a classic dose of fuzzy warm thinking.
Children were "daring to dream" of a better future. I was captivated by the phrase; it was all about their hopes and aspirations, the glass being half full rather than half empty.
And yet only a few days ago Piers Akerman was writing this about aboriginal people and aboriginal culture in a News Corp rag:
In essence, the blind defence of Aboriginal culture has been a disaster. The reality is that few of the defenders of so-called traditional rights have the first clue about pre-contact Aboriginal culture.

Today, there is not a single Aboriginal living a traditional life. This is not a tragedy: it is a reflection on the fact that traditional Aboriginal culture cannot work in a 21st-century Western society.

Not only would many aspects of traditional Aboriginal culture be in breach of Australian law, they would also be in breach of many of the UN’s unobserved treaties and obligations.

In truth, few Aborigines have demonstrated a deep desire to understand and practise the culture of their ancestors.

This was underscored when the National Museum displayed a suite of stone tools almost a decade ago. The spearheads and stone knives, all painstakingly napped and flaked, were the work of a white anthropologist because there was not an Aboriginal with the skills to make them.
Few aborigines have demonstrated a deep desire to understand the culture of their ancestors? Because they wouldn't whip up a neolithic tool for a museum display!
It's impossible to conjure up the cultural arrogance and sheer insulting condescension embedded in those few pars.
The rest of Sinodinos's column is full of clap happy pieties and hopes and dreams, about optimistic realists rather than naive optimists, about bottom up rather than top down approaches and about grass-roots initiatives and things that work on the ground.
In this NAIDOC week we owe our indigenous fellow citizens the courtesy and respect to acknowledge success and build on it.
Well yes, all well and good, and so forth and so on. Dream the impossible dream, you can do it, legs with steel springs, up the side of the sandhill, never stopping, take the ball up the middle, ruck ruck ruck ...

With Piers Akerman as a leading commentator on indigenous matters in the News Corp stable?
With the news that these days blacks in Australia haven't even got the skills to cobble together a neolithic tool?
Why am I unsurprised, uninspired and undelighted? Go figure.
(Below: aboriginal tools, an art and a science now known only to white museum workers). 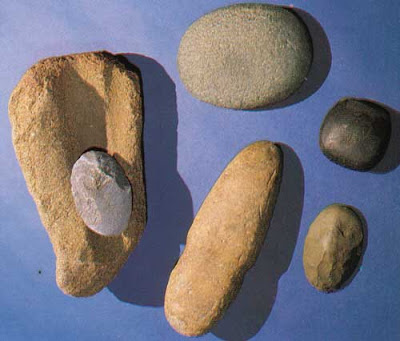 Posted by dorothy parker at 8:17 AM