Piers Akerman, boat people, kicking the can and a shameless lack of shame 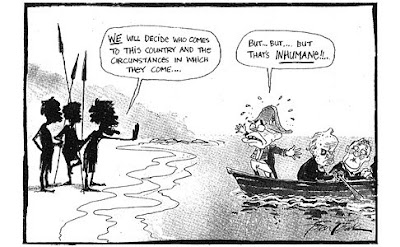 To which Akerman replied:

Jamie, why should I be ashamed of reminding readers of the duplicity of the Rudd government?
What a pity Akerman couldn't have ended his story with a heartfelt plea for tolerance and understanding:
Such articles by commentariat columnists will doubtless result in increased numbers embracing unwholesome anti-immigration groups. And I'm terribly pleased about that because I hate Kevin Rudd so much I'd stoop to anything, throw any kind of mud, dig up any kind of shit, no matter the stench, to conquer. Call me a grub, call me vile, but  please send me your poor and homeless, and watch me make hay with them.
But at least he made the honest reply. Shame? I have no sense of shame, and that's why I can go on being shameless until the cows come home, and the immigrant boat people can is so soundly kicked, it'll be flatter than a pancake.
Which raises only one further question in my mind. Why do people still keep buying the Sunday Telegraph? Cash in the paw only eggs them on, while an online click only sends them into a huddle, trying to work out how to charge freeloaders for the pleasure of reading Piers Akerman.
Your choice, but I'd rather spend six months in a leaky boat than pay for Akerman's musings. Bring on the paywall, bring it on now.
When I was a young boy
I wanted to sail around the world
That's the life for me, living on the sea
Spirit of a sailor, circumnavigates the globe
The lust of a pioneer, will acknowledge
No frontier
I remember you by, thunderclap in the sky
Lightning flash, tempers flare,
'round the horn if you dare
I just spent six months in a leaky boat
Lucky just to keep afloat

Aotearoa, rugged individual
Glisten like a pearl
At the bottom of the world
The tyranny of distance
Didn't stop the cavalier
So why should it stop me
I'll conquer and stay free
Ah c'mon all you lads
Let's forget and forgive
There's a world to explore
Tales to tell back on shore
I just spent six months in a leaky boat
Six months in a leaky boat

Ship-wrecked love can be cruel
Don't be fooled by her kind
There's a wind in my sails
Will protect and prevail
I just spent six months in a leaky boat
Nothing to it leaky boat.

Posted by dorothy parker at 9:30 AM