Chris Deal, crappest 100 songs and contenders for crappest blogs of all time 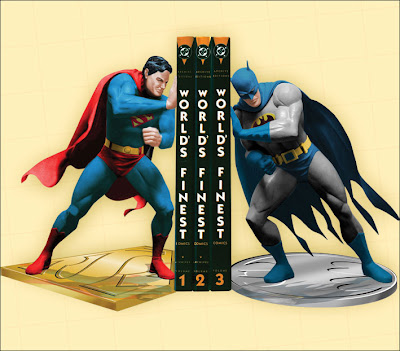 (Above: in the finest traditions of News Corp journalism, an example of nifty book ends which incidentally establish that this site is down and dirty with trend setting trends amongst comic book loving ten year olds. What's that you say, only forty year old nerds get off on superheroes in comic books? Oh go talk dirty to a waitress. And please note the word bookend is actually used in this piece! How's that for relevance).
The loons on loon pond have a game they love to play, and that's naming the crappiest blog on the intertubes.
It's exhausting - at last count they got to a million contenders before they stopped counting, and when the dust had settled, and the squawking stopped, they couldn't decide whether Loon Pond or The Punch deserved to take out the number one prize.
It was decided in the end by a raising of hands and a shout of voices that - as The Punch was financed by Rupert Murdoch's squillions - therefore it should win - at which point some of the loons got terribly upset, since even winning 'worst blog on the intertubes' is a prize better than no prize at all.
But there's a moral to the story, and that involves the danger of reading Crappest 100: the worst songs of all time, as penned by Chris Deal.
It seems that having skewed to sport, The Punch is now trying to skew to the cool, the now, the real and the cutting edge. Like wow dudes and dudettes. Like even mentioning Triple J and its hottest one hundred of all time music poll.
Typical socialistic ABC positivity. How about a bout of negativity? Yep, when all else fails, turn to the worst movie of all time comp, or the worst song of all time, or the crappest one hundred. Sure standbys on a flailing news day (well after all the news that the News of the World is into sleazy, grubby activities worthy of a third world dictator hardly counts as news).
Sadly wit intelligence taste and a knowing referentialism is required when indulging in this kind of schtick. Instead what we get is a bulk offering of recycled music from the intertubes - most likely with shameless disregard for IP rights - and insights like this:
4. Every F**ken City - Paul Kelly
Every city sounds the same. Just like all your songs. Shit.
Oh indeedy, and every childish rant in a childish blog sounds like all those childishly ranting bloggers. Shit.
I could go on but why bother - that's when I decided that most likely all the songs on the list were probably amongst the best songs of all time.
You can, if you like, waste your time on this drivel, but it occurred to me that Rupert Murdoch should be the one that's worried about wasting his money. Meantime Mr. Deal scribbles and scrawls on in his desire for a record burning to match Mr. Hitler's record on book burning:
These are the songs that are, but should never have been. Musical conceptions where the writers should have been forced to wear condoms. Songs that if they were erased from the annals of history, the world would not only not even notice their removal, but would possibly even be changed for the better.
How to fit condoms on writers for The Punch so that the world would not even notice their arrival, or their remove, but would possibly even be changed for the better? And how is this going to appeal to the demographic? As one commentator, Amerigo, pondered that dilemma, he felt compelled to muse:
all along the watchtower ? the end ? pretty neat aye ? whats this? a highschool project?
The Murdoch stable, let loose from the leash, is not a pretty sight. Not so much a pack of fox hunting hounds as a loose rabble of daschunds.
But okay, one high school project does not a high school make. What else have they got?
Well there's Daniela Elser's poignant appeal to the youthful demographic, keeping the pitch for the day chugging along, with her column headed Wanted: youngster to write about drugs and blow jobs.
Ooh, blow jobs. This is going to be a cutting edge demolition of people who want to be cutting edge - including our prattling Polonius Gerard Henderson. She even uses a snap of our Gerard to illustrate the piece. Lordy, Gerard and gen y and blow jobs. It's as desperate as that. But what starts as a rambling analysis of how the youth voice is missing from the current line up turns in to a job application. First the job specification:
What they need is a Hip Young Thing, someone who can knock out a few wry paragraphs about blow jobs and recreational drug use, making a name for themselves with their frequent use of the word ‘fuck’ and poor grammar and syntax.

I’m thinking of a mouthy piece with a soupcon of nous and with the attitude of an MDMA-imbibing drummer about to play their first Homebake sideshow and who wields a vocabulary to Year 10 standard.
(BTW it was spelled f**k, but here we like to use the actual word when the actual word is supposed to be used. After all, between a fuck and a nuclear weapon, allow me to choose the fuck).
Then the job application, complete with a CV full of exemplary qualifications:
I’ve had my fair share of fumblings with B-grade indy rockers, I have stumbled into a mediocre media career, and I’ve never had a relationship last longer than a season of Big Brother. I’ve had the requisite moments of sexual and chemical deviancy, and possess the mandatory quota of gay friends (the last two most definitely not being mutually exclusive).

I have a HECS debt, a credit card debt and a sleep debt.

I can be as cynical, judgemental and self-opinionated as the next Arts graduate with but a passing memory of some French guy named Foucault.

So, call me, call me now - or I’ll just have to go out and follow my other great life ambition of snagging myself a still employed Macquarie banker, a renovated terrace in Paddo and a couple of kids named Bruno and Allegra.
Ah thanks for that Daniela, but here at loon pond, we're still to the brim with the pontifications of our prattling Polonius, and surprisingly we're suddenly full of strange tenderness towards Gerard Henderson. Even if it's unlikely he'll be writing about blow jobs in the near future.
Two strikes in a row. What else you got?
Well sad to say, fatigue set in. I couldn't raise the strength to open up Sarah Ayoub's Why we should give our police a proper payrise - I had this strange desire to give her a burst of taser power - and then Luke McIlveen offered up The one cyclist I actually like with some recycled complete with recycled YouTube footage of an interview with Lance Armstrong (never mind the IP), and I began to get it. This is a site for people too lazy to do a little digging around, to find interest amongst the billions of items on the intertubes, people who prefer a brand to intelligent discourse.
Readers of Rupert Murdoch's rags. Gob smacked by this revelation - it felt better than joining the Rosicrucians - I rambled on down the page.
There was Clive Mathieson on Stokes vs. Packer: A media mogul death match, and Ed Charles offering up Eaaaarggh ... what really made you sick last night ... and Charles Miranda doing I don't mean to be a Queen but I haven't a thing to wear ...
And I got paranoid. I realized this was a reverse takeover of loon pond. The inhabitants had gone and got their own web site. Loons to the right of me, loons to the left, everywhere the din and squawk of loons.
But surely there had to be a capper for this tenth day of July. And there was. It just so happened to be published on the ninth day of July, by David Penberthy with the header How Australia forgot about Schapelle Corby.
Now if that isn't the perfect bookend to five minutes of reading The Punch. David Penberthy reminding us that we've forgotten about Schapelle Corby when on exactly the same day the world wide resources of News Limited brought us a story about how Schapelle Corby gave herself a birthday present by unveiling a shorter hair style as she prepares to celebrate her 32nd birthday. Complete with locks lopped photo!
Banal, trivial, breathtakingly obvious and bereft of insight, with endless bonus recycled footage from YouTube. That's a conversation at The Punch.
Contender for crappest 100 blog spots of all time?
You betcha, hotter than a blow job in a sauna ...
(Below: you can take the boys and girls out of Murdoch and put them in a blog, but can you take the Murdoch out of the boys and girls? Another fine example of a hard hitting story from the News team, this time from the death by chocolate team at the Daily Terror. But remember to keep your cell phone to yourself when on the premises. You just never know). 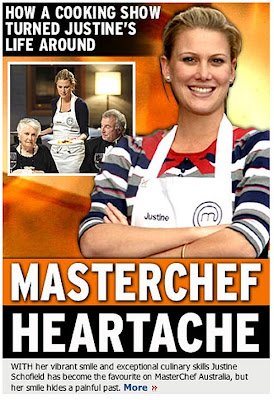