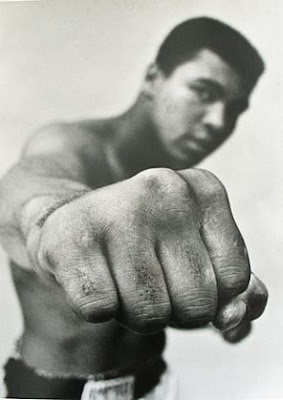 (Above: Muhammad Ali, Chicago, 1966, gelatin silver by Thomas Hoepker).
If it's Tuesday, it must be Gerard Henderson day. Yep, Black and white and Rudd all over.
And if it's Gerard Henderson day, it must be time for a gratuitous, ever so predictable, ever so humble tug of the forelock in the general direction of John Howard. You've got it:
Such long-serving prime ministers as Malcolm Fraser, Bob Hawke and Howard have been good at handling criticism.
Oh yes, Malcolm Fraser was ever so good at handling criticism, while as for that silly old bugger Bob Hawke, he could display a calm, cool, good humor while dismissing silly old buggers out of hand.
But where were we? It seems Gerard Henderson's ever so sensitive antennae is quivering with excitement, because he's found a fatal flaw in Chairman Rudd. His glass jaw, so to speak, the thing that will bring him down once the Liberals learn how to box like Sonny Liston:
For all his many strengths, Rudd has one significant weakness. He genuinely wants to be loved and he does not hold the view that critics can have sound judgment along with good intentions. I noticed this when Rudd addressed The Sydney Institute in July 2007. As would be expected, he put in a good performance and there was an expectation in the room that he would soon prevail over Howard. But I was surprised when Rudd reacted with some anger to two courteous, albeit searching, questions on tax and superannuation. It seemed an overreaction.
Hah. You see? A flash of anger. To courteous folk. An over reaction. You're spotted punk. Busted. Outed.
Can't take a punch, only wants a love tap. Doesn't understand the first rule of politics. When you see a tank approaching you, lie down and let it run over you. Especially tanks driven by Liberals or Gerard Henderson. The people will love you for it.
Cast the runes again, dig out the entrails, check the state of the tea leaves:
Rudd Labor is experiencing criticism over its borrowing and spending program and its commitment to introduce an emissions trading scheme (which could have a deleterious effect on Victoria and South Australia). However, in the future, the Prime Minister could face sustained criticism from those on the left who believe he has not done enough on climate change.

Over time political spin loses its clout. The democratic leaders who make an impact are rarely loved while in office and demonstrate little sensitivity to criticism. In the past, Rudd had adapted his persona to meet new challenges. There is unfinished business here.

Oh yes, if the right can't bring down Chairman Rudd, maybe the left will do it for them. Now allow me to draw myself up to  my full portentous preening height and announce darkly, there is unfinished business here.
Until Chairman Rudd is dragged down and savaged by a pack of liberal lions, politics will never be finished and utopia can never begin.
I used to think that life, like liberty, was unfinished business, and that Unfinished Business was the title of the terrible Bob Ellis's dire first low budget feature.
But then I don't have much time for Murdoch media, whereas Henderson thinks their splendid effort in promoting a fake email, to the discomfort of both Chairman Rudd and Malcolm in the middle, was wonderful journalism. After all, it's not their business to work out whether the email was fake, just to run like hell with it, and create as much of a flurry of floozies as they could manage. After all, in the end, it all worked out terribly well for Chairman Rudd:
The claim that Rudd may have misled Parliament concerning this matter was a legitimate journalistic story which was reported at various levels of intensity by virtually all sections of the media. The News Limited metropolitan papers led on the issue because they had what was purported to be an email from the Prime Minister's office to a Treasury official. As soon as the email was demonstrated to be false, the Canberra press gallery focused its criticism on Malcolm Turnbull who had given the fake email unintentional credibility. As the polls quickly established, the unintended consequence of the saga was to discredit the Opposition Leader and enhance the credibility of the Prime Minister.

So what is Rudd's problem?
Here you need to tap sagely on your chin, and nod and smirk and mutter the words glass jaw. Doesn't like criticism. Unlike Gerard Henderson, who not only loves criticism, he's been known to withdraw from the public eye for weeks, so he can undergo rigorous self criticism in the style demanded by Chairman Mao.
And of course unlike John Howard. Because you see, Rudd is just a pathetic Dolly the sheep, just a clone of the master.
From the time he entered Parliament at the 1998 election, Rudd modelled himself on how Howard had handled the media when he was Liberal Party deputy leader or an Opposition frontbencher. Howard understood that, when in opposition, there was little time for a frontbencher on television and little room in newspapers. But radio had numerous hours to fill and Howard rarely said no to a radio invitation.

Rudd adopted a similar approach in his early years in opposition, accepting most radio invitations. He worked extremely hard and managed to get a better run on television and in newspapers. The AWB's involvement in the abuses of the Iraqi oil-for-food program brought about a situation where Rudd received many invitations on the Lateline program. Also, he convinced Channel Seven to give him - along with Joe Hockey - a weekly slot on Sunrise. So, when Rudd became Labor leader in December 2006, he was a public figure. Moreover, due to the fact that so many journalists were critical of the Howard government's foreign, industrial relations and social policies, Rudd was rarely subjected to a tough cross-examination on Sunrise or anywhere else. It was all so easy.
Did I mention how wonderful John Howard is? Was? Will be? For ever and ever, amen.
Now here you must nod sagely and tap on your chin a couple of times. Glass jaw. Never felt a real punch. The pussy.
Oh, and never ever fail to mention how the Murdoch press, which controls some seventy per cent of the newsprint in this country, is full of socialistic liberal democrats. You know, like the way Piers Akerman, Tim Blair, Andrew Bolt, Janet Albrechtsen, Miranda Devine and Gerard Henderson represent dangerous social democrat tendencies:
As prime minister, Rudd has had a dream run in the Australian media, almost equalling that experienced by Barack Obama in the United States over the past five months. It is no secret that the Western media prefers social democrats to conservatives. In addition, Rudd and Obama have had the political advantage of leading a nation at a time of global financial crisis. Rudd looks like a near certain victor in the next election, which is due in late 2010.
Yep, it's no secret this western media, to a sage man with an eye fixated on the wrong end of the telescope.
So here's where you nod sagely, moan about the western media preferring social democrats to conservatives, and mutter how Rudd's glass jaw will take  him to defeat.
What's that you say? He's going to win in 2010? Oh no, say it ain't so, all this talk of a glass jaw and he isn't cruising for a bruising?
What to say then? How to help Malcolm in the middle.
Well for starters, isn't it time for Gerard Henderson to let go of John Howard? Maybe not mention him for a day, a week, a month? And look elsewhere for inspiration?
Malcolm swings with his left, Malcolm swings with his right,
Look at young Malcolm carry the fight.
The Ruddster keeps backing, but there's not enough room,
It's a matter of time till Malcolm lowers the boom.
The Ruddster's still rising, now Malcolm lands with a right,
What a beautiful swing, and the punch raises the Bear clean out of the ring.
The Ruddster's still rising and the ref wears a frown,
For he can't start counting till Kevin goes down.
Now the Ruddster's disappearing from view,
The crowd is going frantic,
But radar stations have picked him up,
Somewhere over the Atlantic.
Who would have thought when they came to the fight?
That they'd witness the launching of a human satellite.
Yes the crowd did not dream, when they put up the money,
That they would see a total eclipse of the Sonny.
Then again, maybe not. There's unfinished business here, but exactly what's unfinished and precisely what business remains a tad unclear. Oh and did I mention John Howard as an example ...?
And apologies to Muhammad Ali, and the way his rhyme of money and sonny is irreplaceable. Now there was a man who might have had a broken jaw, but never a glass one ...
Posted by dorothy parker at 7:16 AM