Piers Akerman, the Chinese, barbarians at the gate, the opium wars, history and a hammer for a head 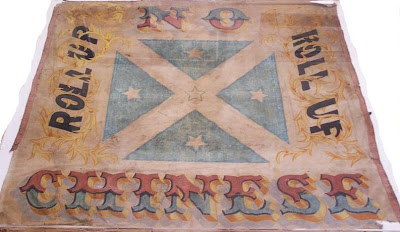 And so we come to the strange and disturbing case of Piers Akerman's fear and loathing of the Chinese.
His latest rant - Rudd stymied as the barbarians shut the gate - would be worthy of a digger on the Australian goldfields in the nineteenth century. Indeedy, he even manages to revive the term celestial, a word you don't find being used outside the muckraking that inspired the Lambing Flat riots in 1861.
As Peng discovered and Hu is now learning, after 177 years the Chinese are still adhering to the established laws of the Celestial Empire and ignoring international covenants which apply in the more civilised modern nations.

Peng is of course James Peng, who spent six years in a Chinese prison, and Hu is the latest Chinese-born Australian businessman to find himself in trouble in the Middle Kingdom (see, I can do the Sons of Heaven gibberish as well as Piers).
But enough of that, let's get back to the history lesson that Piers provides us so we can better understand the fiendish nature of the Chinese:
Not withstanding the muscular actions of the seafaring door openers of the British East India Company, it is the Chinese who could now best be described as barbarians in the matter of both Peng and Hu.

It is Chinese enterprises which enjoy the support of the weight of the state, despite the best efforts of publicists to claim the state ensures businesses in which it holds an interest (all mainland Chinese businesses) operate at arm’s length from the political wing.
Muscular actions? Perhaps they learned too well the lesson of the British East India company, which happened to be fuck them any which way you can in whatever direction you can manage.
But what you ask about the Opium Wars. Why were they fought? Did it happen perchance to involve the British government sorting out the Chinese so that their businessmen could get on with the business of screwing the Chinese?
For all the nastiness of the opium trade, the merchants from Britain and the other European nations which opened China to the world did mightily assist in the modernisation of a feudal state.

Nastiness? Ah that'd be the couple of wars that were fought so that the British smuggling of opium into China from India would be tolerated by the Chinese government, and the noble private sector British East India company could flog its crap to a hooked nation. Well I guess trying to turn a nation into a bunch of dependent junkies is some kind of modernization.
The first war prompted the newly elected MP William Gladstone to wonder if there had ever been a war more unjust in its origin, a war more calculated to cover this country with permanent disgrace, I do not know.
We could go on through the despicable litany of misbegotten western imperial behavior in China, while not forgetting the contribution of Japan in the second world war, or mentioning the determined desire of the British government to hold on to Hong Kong right up to 1997, after having first got hold of the territory after China's defeat in the second Opium war and the signing of the Convention of Peking.
Yes, tough lessons and the Chinese learned them well. But now we have our very own colonial Colonel Fawcett telling us how it was done in the old days, and how presumably diplomacy should be conducted these days. Quoting Jim Spigelman, Akerman recites an anecdote about how Hugh Hamilton Lindsay had the Daotai's measure in his quest for the opening of Chinese markets:
He sent two tough sailors ashore to deliver a petition to the Daotai requesting he rethink his order. After knocking on the locked entrance gates of the principal public building in Shanghai and receiving no joy, the worthies applied their shoulders to the barriers and shook them open.

Lindsay then stood up to the Daotai, refusing to take back his petition once it had been read and copied, refusing to accept a reply which used terminology of rejection not just refusal, and rejecting the use of the word translated as “barbarian”.
This is of course so Akerman can brood about the word barbarian and its shocking deployment in relation to westerners. Actually the anecdote deserves its proper re-telling:
On June 20, 1832, with symbolism bordering on the vulgar, two English sailors from the Lord Amherst shouldered open the locked entrance gates of the major public building in Shanghai so that their commander could present a petition demanding that the city be opened to British trade. As the commander, Hugh Hamilton Lindsay, reported to his superiors in the British East India Company: "They shook them off their hinges and brought them down with a great clatter." However, conscious of British standards of proper behaviour, he took pains to report that, of course, he had knocked first.
And Akerman misses the point of the anecdote, deliberately of course, perhaps because he could never see the point of knocking first:
Reacting to the use of the word barbarian, Lindsay protested: "The affront is intolerable, for by such conduct the respectability of my own country would suffer. The great English nation has never been a barbarian nation, but a foreign nation."

A document was produced which referred to him as an "English trader". Even though the Shanghai public never saw it, Lindsay was placated. However, his conduct was not calculated to convince any Chinese that the term was inappropriate.

Why? What did Lindsay get up to¿ Well I guess in much the same way as you might take a dim view of somebody deploying a false name and fake occupation:
Lindsay and his interpreter Charles Gutzlaff also made their reports, which were published in England and became very influential. Lindsay was particularly critical of the deceptive conduct of the local officials, referring to their "petty and degrading duplicity". He said this without a trace of embarrassment about the fact that, in order to hide his association with the East India Company, Lindsay had given a false name and claimed to be a private trader blown off course on a voyage from Bengal to Japan. Gutzlaff, who had also given a false name and translated everything that Lindsay said, had spent some of his time distributing Chinese-language excerpts from the Bible and certain religious tracts with such titles as "A Tract against Lying"; "A Tract against Gambling" and "A Tract in Praise of Honesty".
A tract against lying and dissembling hey. What a pity Akerman doesn't read this kind of tract on a regular basis:
Lindsay was adamant as to the model of effective European conduct. "Compliance," he reported, "begets insolence; opposition and defiance produces servility and friendly professions." It apparently never crossed his mind that he was simply being humoured in order to speed his departure.

And so we have in Akerman the Lindsay of his day. Well even his master Rupert found things tricky in Beijing and when you cite the lessons of history, you should be careful:
In his report, Lindsay's strongest contempt was reserved for his assessment of Chinese military prowess. He dismissed the war junks he saw as "wretched and inefficient". He thought the army, with its antiquated and decrepit armaments, would be despatched by one-tenth the number of European troops.

Gutzlaff, the missionary, plainly shared the low value placed on military virtues by the Chinese scholar gentry and its difficulty in accepting the proposition that great skill in the art of killing others was a mark of a superior civilisation. He seemed to understand the Chinese position when he said:

From the long peace which China has enjoyed, all their military works have fallen into decay. They even seem anxious that all should crumble into dust and that wars should be blotted from remembering ... they detest bloodshed and have generally made the greatest sacrifices to prevent it. We attach no blame to their cowardice [a word he clearly used bearing his European audience in mind] but hope that while they continue to be pacific they will cease to be overbearing towards other nations who have power to humble their arrogance.

Ah yes, how things have changed. After being done over, time and again, the Chinese worked out that they needed to get up a bunch of weaponry and a huge army, and then see what happens when the barbarians turn up at the gates and politely knock.
Well done Britain and Japan and every other nation that congregated in Hong Kong in search of the elusive Chinese market - sell every one a bottle opener and you'll be a billionaire my lad - and while we're at it Akkers, why not revive the opium trade? Oh sorry, we already have, by arranging for it to flourish in Afghanistan.
So what's the history lesson for today folks? There are barbarians at the gate, and they carry greetings from Akerman. But beware an ignorance of the implications, subtleties and nuances of history, lest you stumble around in the circus like a clown who can't find his way to the ring ...
Oh as for the rest of Akkers' column, it's a standard dumbed down gloss of the situation of Hu from the perspective of the outraged Liberal party and columnist commentariat, which if read by Chinese officials would do more harm than good, but there you go, when you've spent a lifetime kicking the Chinese and communist can, what else can you do.
When all you've got for a head is a hammer, everything will always look like a nail ... 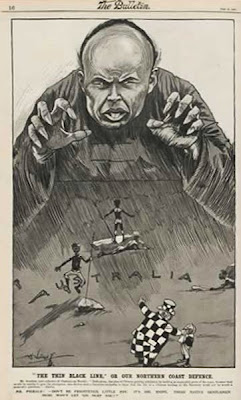