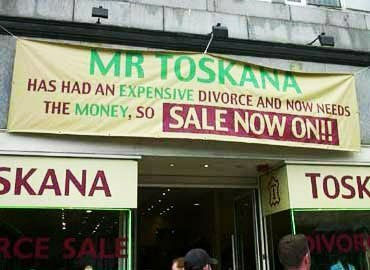 Tony Abbott is already out and about spruiking for his forthcoming book, which sounds a strange and wonderful beast.
It seems he's only just discovered conservatism, and it must now come out, like young homosexuals announcing to their family that the straight life might not be for them.
"Conservatism was the doctrine that dare not speak its name," Mr Abbott said. "Now I think it is important that conservatism be acknowledged as a critically important component of the strands of thinking within the Liberal Party.
"Conservatism has a potential appeal which may well be much broader than the appeal of political philosophies which have historically been more acceptable in Australia, such as liberalism and socialism."
(Abbott foresees 'coming out' for conservatism).
The doctrine that dare not speak its name? Like the love that dare not speak its name? Um, what did I learn last week in class about trading off, conflation, hi jacking, taking over, usurping and arrogating a term from a minority in the interests of boosting the heterosexual majority? Is conservatism a new kind of sodomy? Or even pedophilia?
Lordy, and what kind of conservative speaking in tongues was going on then during the Howard years and the Bush years. I should have stayed longer in that Baptist church to work it out.
So what's the lad got? Pardon me while I yawn. It's family values. And a return to the Britain of the nineteen thirties, at least in the matter of marital unions:
The point I make in the book is that a society that is moving towards some kind of recognition of gay unions, for instance, is surely capable of providing additional recognition to what might be thought of as traditional marriage.
So what's Abbott's idea of providing greater recognition for man woman marriage? Couples will be given the option of marriage under a matrimonial causes act, which will bring back the fault-based system of divorce dismantled in Australia back in 1975.
Uh huh. Revolutionary thinking. As Josh Gordon notes in his piece for The Age, this provided some fourteen grounds for divorce: including adultery, desertion, cruelty, habitual drunkenness, imprisonment and insanity, or separation for more than five years.

By golly, the private investigator lobby must be slobbering into their beers, and they must have a powerful lobby group at work in the bowels of the Conservative nee Liberal party. Who could ever forget the fun days they had, and the money they earned, and the newspapers they helped sell discovering proof of adultery, or other evidence which would allow one partner to take the other to the cleaners.
I couldn't think of a better plan to diminish trust in marriage, or bring back a punitive approach to relationships. But it seems that Abbott sees marriage as basically an economic contract requiring strict enforceability in a court of law, instead of the slack kind of easy contract we've grown used to:
Something akin to matrimonial causes act marriage ought to be an option for people who would like it," Mr Abbott said. "Even though (marriage) is probably the most important commitment that any human being can make, in fact there are many, many contracts which are harder to enter and harder to get out of than this one."

Well I can see a big future for this new form of matrimonial binding. I can just see all the men with their cocks flapping in the wind like a barn door in a gale signing up for rigorously enforceable punitive terms for a bit of fluff on the side. Why women might even put in a liquidated damages clause so that if the men fail to hit the right kind of milestone, then the penalty for failure to perform is payable without the need to litigate.
Sad to say, in these distrusting days, we already are seeing signs that the contractual basis for marriage is undergoing some changes, with Katrin Radmacher, a German heiress and one of Germany's richest women, winning a Court of Appeal claim in the UK, to overturn a previous award her ex-husband of £5.8m of her £100m fortune.
The decision turned on a pre-nuptial agreement (Pre-nuptial victory for heiress).
Good luck to her - if you sign a pre-nup it should mean something. But I find it peculiarly funny that Tony Abbott should think that bringing back private detectives and lawyers and courts to arbitrate between husband and wife will somehow either advance the cause of matrimony or stand as a beacon of advanced conservative thinking.
If this is the best his book Battlelines has got to offer, pardon me if I spare myself the chore of wading through the 368 pages, at least until it turns up on the two dollar remainder table.
But wait, that page count means it's bulky. Maybe it's even got footnotes, in which case his thoughts on climate change should be a treat ...
(Below: contact Tony Abbott to see if he can develop a private member's bill for this kind of cake to be made available to all contracting couples wanting to settle things the conservative way). 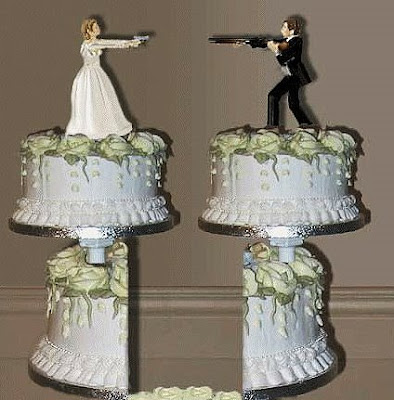