Daniela Elser, hairdressers, and the Punch still striving to be the dumbest conversation in Australia 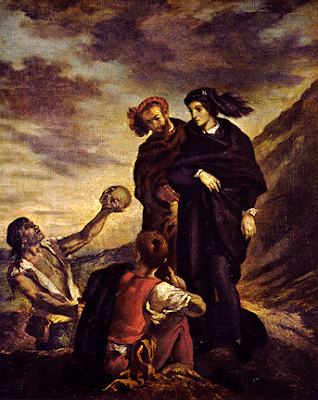 (Above: Delacroix doing Hamlet, ah fuck it, this culture stuff is thirsty work, feel like a beer?)
It used to be that Tory Maguire was the aspirational bubble headed bimbo at The Punch, Australia's dumbest conversation, but recently a new contender has risen in the ranks.
Following her insightful Wanted: youngster to write about drugs and blow jobs, Daniela Elser now offers up Tune in, drop out, get drunk, become a hairdresser.
Dearie me, are the young so unhappy and despairing and cynical. Or worse still, thinking that they're still writing for Honi Soit, the student newspaper of Sydney University?
It seems poor Daniela spent five years at university studying arts and was scarified by the experience. But what attempts to be an insight into university turns out to be a strangely revealing and self-pitying exercise in fear and loathing of the y'artz. Which makes it all the stranger that Daniela seems to want to be a journalist, which is a kind of writing. Yeech.
Somehow she seems to think her university experience is a good argument against Julia Gillard's desire to create another 300,000 places for students. But does Daniela's sense of a wasted life mean others - perhaps without her opportunities - will proceed to waste any chance given to them?
If you’ve ever pondered the question, what does a 2.1 in History and a post-graduate qualification in Journalism get you, then you’re looking at it - a HECs debt, 18,000 poetically un-spell-checked words about something to do with social protest movements of the 21st century (a page-turner and a half) and several Ikea shelves full of half- read books.

Then there’s a lingering sense I could have somehow better spent four years of my life actually reading books or helping save the third world or just sleeping in. I’m starting to wish that I had thought more about what I really wanted out of the whole tertiary gambit before I plunged in head first and had to spend hours of my life reading Brecht.

To those 300,000, (most of whom are currently learning how to use scissors and the important lesson why we should never eat Clag), and to the HSC students of 2009, I ask you this - think very carefully about your university choices, because frankly, why don’t you choose not to?

Ah well, I suppose Brecht is a bit too lefty and arty for the average Punch reader, what with his blather abut epic theatre and dialectical materialism. So let's stay rigidly on the surface of ideas instead:
I propose this instead - have the awkward drunken sex, live in abject poverty, eat the bad food and pretend to understand Marshall McLuhan for a couple of years without the burden of having to knock out 5,000 words on Ford Maddox Ford’s ‘‘The Good Soldier”.

Or maybe just sit around doing nothing at all and indulging in rank self-pity? Whatever.
Make the choice not to rack up an IOU to the federal government to the tune of tens of thousands of dollars and have only a vague understanding of Foucault to show for it. Choose to tread your own beer-stained path to nebulous maturity unfettered by Union fees or having to actually read Ulysses (or pretend you’ve even started the damn colossus).

Spend several years drinking with abandon and do away with the pretence of higher education and tertiary qualifications and then actually do something that will help the country- like take up hairdressing at Tafe.

Now a nation of hairdressers, surely, that’s something Julia would really like.

No actually I think Julia would love a nation of writers for The Punch proving conclusively that a hated for universities can be turned into a way of life.
But you know it's actually one of the oldest, cheapest, weakest tricks in the book, to conflate the honesty of hairdressing with university ponces who've never done an honest day's work in their life, or the uselessness of culture and the y'arts up against the honest yeoman learning at TAFE. As if somehow they're mutually exclusive. Tell that to a carpenter building a set, or a grip doing the perfect track.
Which is why it's a pity Daniela wasn't around to explain to our electrician as he re-wired our house why he pissed us off by boasting how he was going to the complete Beethoven cycle - using our money for his pleasure no doubt, while we sat at home listening to economical CDs. Oh yes these tradies know how to rub it in.
So it goes.
But surely Daniela learned something at uni, even during the depths of her despair:
If you go to university you will learn how to negotiate your way through the mire of Centrelink bureaucracy.

You will learn how to drink, nay, truly appreciate wine supped from a 4-litre box and you will become quite deft at fending off the feeble overtures of an engineering student.

You will learn to treat with abject distrust, tinged with antipathy, anyone with a Jesus fish on t-shirt, anyone from the Womyn’s Collective and a certain philosophy lecturer with a penchant for post-lecture private tutoring.

Great. Life values you can take with you anywhere for ever. A detestation of the Evangelical Union and rank lesbian feminism mixed with a hostility to men who just want a fuck. Along with a hostility to engineering students (what about the rural scientists as well?) and an appreciation of Chateau cardboard. Why perchance Daniela might even later in life turn into a female Bob Ellis.
I keed, I keed. You wouldn't wish that fate on any uni student. But it seems that as usual it's all the fault of baby boomers:
We seem to be surrounded by people (usually baby boomers with fond, stoned memories of watching free Fellini films and furtive fumblings in the bar after a shandy too many) who speak nostalgically, glowingly, of the so-called ‘university experience’.

But in my five or so years at various institutions studying a veritable swathe of subjects, I found nary a hint of this collegiate, intellectual ambience.

Well actually Daniela, though I guess it's a bit late for you, university is a place where you can be exposed to ideas and where you can expose yourself to ideas, even if that means all you can do later in life is be flip about D. H. Lawrence, Brecht and James Joyce.
But you hit your mark. Your first comment comes from a self described rationalist who says:
Solution: stop subsidising wastes of time (ie. arts and most of humanities).

That is where all the communists and other gits are.

Ah yes, The Punch. Home to fuck witted conversationalists where cretinous philistinism is a way of life. But wait, there's more. Cue Eric:
Rationalist has it right. Most of the “humanities” serve no other purpose than left-wing indoctrination. They’re a waste of money for both taxpayers and students.

Our universities could be greatly improved if the worthless half or so were simply dropped.
And there's more all about the uselessness of the arts in the comments.
Well somehow between reading rationalist or Eric or Daniela, I'd rather be reading Shakespeare than their dumb fuck ideas on life and the joys of doing a course in engineering so that they can build another motorway to clip the petrol heads like sheep as they go from job to pub and footy.
But you know that's just a personal choice, personal taste thing, and to each their own, but it does remind me of Malcolm Bradbury's genuinely funny satire on provincial redbrick universities in Eating People is Wrong, which amongst other things has a great time with one student doing a thesis on fish imagery in Shakespeare.
There's just one irony. I doubt whether I would have come across the book unless an English lecturer had thrust it into my rural paw one night, along with exposing me to Indian food after a lifetime of lamb cutlets and three vegies.
So it goes. I guess that's just a hazy stoned memory of people being people.
I'm also reminded that Malcolm Bradbury was much given to one liners:

If God had been a liberal we wouldn’t have had the Ten Commandments; we’d have the Ten Suggestions.

So can I make a suggestion to Daniela in her bid to become a writer for The Punch. Enough with the self-pity and the cheap anti-intellectual clap trap. If you love a career in hair-dressing, go do a course in hair-dressing. That doesn't mean you can only read New Idea. Unless of course New Idea is your idea of an intellectual rag full of riches and insight - and given you write for The Punch I'm not trying to second guess here.
And can I make another suggestion to the arts hating cretinous philistines who infest the commentary section. Go to this random Shakespeare abuse generator here.
Apply any combination to yourself as you disappear up your fundaments.
And if  you can't be bothered with that exercise in culture, why not just go fuck yourself, though I believe Hamlet put it with a shade more subtlety and nuance when confronted by his first skull:
There's another: why may not that be the skull of a lawyer?
Where be his quiddits now, his quillets, his cases, his tenures,
and his tricks?
Why does he suffer this rude knave now to knock
him about the sconce with a dirty shovel, and will not tell him
of his action of battery?
Hum! This fellow might be in's time a
great buyer of land, with his statutes, his recognizances, his
fines, his double vouchers, his recoveries: is this the fine of
his fines, and the recovery of his recoveries, to have his fine
pate full of fine dirt?
Will his vouchers vouch him no more of
his purchases, and double ones too, than the length and breadth
of a pair of indentures?
The very conveyances of his lands will
scarcely lie in this box; and must the inheritor himself have no
more, ha?
Memo to Daniela. If you're going to pitch to the punters, the commoners, the groundlings and the stinkards  in the pits and the stalls, try doing it with a bit of style. It's the least a hairdresser would do, and it's the least a writer should try to do ...
Posted by dorothy parker at 10:03 AM