Greg Sheridan, the Iranian crisis, the secular humanist crisis and a load of hot air 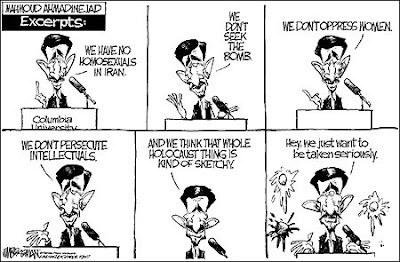 How's this for a mouthful from Greg Sheridan?
The truth is the language and practice of human rights advocacy in the West has become completely corrupted by the postmodern ideologies of the contemporary Left. In this parallel universe all crimes are a subset of imperialism and the only true villains are the US, Israel and, for us, Australia.
Dearie me, he must have been drinking with Hal G. P. Colebatch.
I guess he knows all about parallel universes, because he must live in one.
I can't recollect the time that being left involved supporting a theocratic state. For that matter I can't recollect the time that the word "postmodern became so corrupted and meaningless it could be applied as a term of abuse to the ideologies of the contemporary left.
The last I looked postmodernism described movements after what had come to be termed the modernist movement. Which means you can have postmodernist Christians, or even - gasp - postmodernist newspaper columnists, not to mention postmodernists artists and postmodernist wankers.
The word is so vague (here) that whenever I read it as a term of abuse I think it might have just been so much more sensible and honest to use a decent, straightforward term of abuse. You know, like "deadshit ideologies of the contemporary left".
Sheridan sounds like a man in his cups, ranting at the world in his column West's hypocrites betray Iranians. So let's keep checking in with the rant:
When Frank Brennan commented that the Victorian human rights charter had been ineffective in its own terms and had little to do with human rights, but had become "a device for the delivery of a soft Left sectarian agenda", he was, perhaps somewhat unconsciously, making a broader point about the debasement and collapse of authentic human rights advocacy in the West.
Perhaps somewhat unconsciously? Choke on the stupidity of those words in a Sheridan bizarro world where a comment about the Victorian human rights charter (by a Catholic priest) is somehow taken to reveal something about the debasement and collapse of authentic human rights advocacy in the West!
Blather, unadulterated blather. Or perhaps I should say postmodernist blather. To use a Jesuit priest to upbraid leftists about theocracy in Iran. Bizarro world has a new superman.
But what about going back to old wounds, clearly still suppurating?
What about The Age's cartoonist Michael Leunig, who once drew a cartoon so morally obtuse, stupid and offensive that it was happily accepted by an Iranian newspaper in a competition for cartoons that would offend Jews (the cartoon was submitted without Leunig's knowledge), but who is apparently unmoved to draw an image in sympathy with young Iranian democrats?
Let's not get back into the cartoon controversy, since even the gratuitous Sheridan has to quickly add the qualification that Leunig did not submit the cartoon in question to the competition, and so did not at the time display sympathy with Iranian posturing.
That's old news, an old controversy and an old slur. What's interesting now is how you can be hung, drawn and quartered for not drawing a cartoon to Greg Sheridan's specifications? Here's an idea. Why not commission a cartoon on the subject? Put your own money where your righteous, indignant, flapping mouth is. Or try doing your own cartoon. Make sure it features a clown.
Personally I blame Leunig for not writing Shakespeare's fortieth play, a transposition of the Romeo and Juliet theme into a Persian setting, but that's now a private matter between us. What conclusion can we draw from his failure to jump through Greg Sheridan's hoop?
The conclusion must be that many Western human rights organisations, and many of the most self-congratulatory and morally vain posturers, are not interested in human rights at all. They are interested in advancing a soft Left sectarian agenda. Except, of course, that the word soft may be wholly misplaced.
Sectarian agenda? WTF. What exactly is that supposed to mean? You know in the old days I understood the word sectarian via the kind of humor in Monty Python's Life of Brian, with its fun about splitters in the left.
But really when it comes down to it, credit where credit is due. It's religion that showed just how to pursue a relentless bigotry and hatred between groups - think no further than Protestants and Catholics in the good old days, think no further than Shia and Sunni Muslims.
Next step for Sheridan? Why not a hearty lecture on liberal fascism?
And yes perhaps the word "soft" should be applied to soft cock newspaper columnists jumping up and down on the spot in an imitation of Chicken Little while doing fuck all for human rights or world freedom. You know in a self-congratulatory and morally vain way, posturing in prose like a prize gherkin.
You can read the rest of the diatribe for yourself, as Sheridan attempts to maintain the rage.
Oh and the result of the war in Iraq? Iran's corrupt theocratic regime strengthened, to the obvious discontent of its people, and Iraq slipping ever more closely and dangerously into its slipstream.

And the next time I get abused for being a martial materialist opposed to religion - in whichever guise it comes along - I'll be able to remind people that at the same time I'm supposedly a derelict supporter of a theocratic regime.
That's right: secular humanists in Australia bad; secular humanists in Iran good.
Talk about hypocrites; talk about Greg Sheridan.
If John Hartigan wants a good example why shoddy, shonky, hysterical column writing is worth a pinch of shit when it comes to thinking about buying a newspaper, he should look no further than Greg Sheridan.
On a lighter note, why am I reminded of Monty Python when I read Sheridan? Is he a combination of the Black Knight and John Cleese as Reg in Life of Brian? Whatever, I've run it before, but I felt the need for a cleansing laugh after immersing myself in nonsense:
Judith: I do feel, Reg, that any Anti-Imperialist group like ours must reflect such a divergence of interests within its power-base. Reg: Agreed. Francis?
Frank: Yeah. I think Judith's point of view is very valid, Reg, provided the Movement never forgets that it is the inalienable right of every man--
Stan: Or woman.
Francis: Or woman... to rid himself--
Stan: Or herself.
Francis: Or herself.
Reg: Agreed.
Francis: Thank you, brother.
Stan: Or sister.
Francis: Or sister. Where was I?
Reg: I think you'd finished.
Francis: Oh. Right.
Reg: Furthermore, it is the birthright of every man--
Stan: Or woman.
Reg: Why don't you shut up about women, Stan. You're putting us off.
Stan: Women have a perfect right to play a part in our movement, Reg.
Francis: Why are you always on about women, Stan?
Stan: I want to be one.
Reg: What?
Stan: I want to be a woman. From now on, I want you all to call me 'Loretta'.
Reg: What?!
Loretta: It's my right as a man.
Judith: Well, why do you want to be Loretta, Stan?
Loretta: I want to have babies.
Reg: You want to have babies?!
Loretta: It's every man's right to have babies if he wants them.
Reg: But... you can't have babies.
Loretta: Don't you oppress me.
Reg: I'm not oppressing you, Stan. You haven't got a womb! Where's the foetus going to gestate?! You going to keep it in a box?!
Loretta: [crying]
Judith: Here! I-- I've got an idea. Suppose you agree that he can't actually have babies, not having a womb, which is nobody's fault, not even the Romans', but that he can have the right to have babies.
Francis: Good idea, Judith. We shall fight the oppressors for your right to have babies, brother. Sister. Sorry.
Reg: What's the point?
Francis: What?
Reg: What's the point of fighting for his right to have babies when he can't have babies?! Francis: It is symbolic of our struggle against oppression.
Reg: Symbolic of his struggle against reality.
I wonder how Greg Sheridan would cope with transsexuals for intellectual and sexual freedom in Iran? Or in Australia, for that matter.
Posted by dorothy parker at 8:03 AM