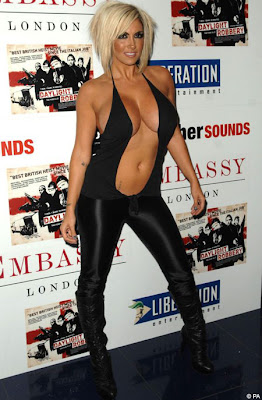 (Above: Jodie Marsh in a lycra jumpsuit, the sort of sight Luke McIlveen can't cop before breakfast. I know, I know, it's descending to the standard of News Corp, but if you're doing the limbo, the aim is to see how low you can go).
Seeing as how I upset a bunch of cyclists awhile back, it's a pleasure to watch them get hold of Luke McIlveen, indulge in a hate fest and shake him all about.
Another bump for a superman in tights is his contribution to Sydney lore on how to respond to cyclists on the road. (It's recycled in The Punch as well, which is where all the cyclists get agitated, but as Tim Blair keeps telling us, why bother to recycle garbage).
I don't like cyclists as a general rule. I don't like the way they clog up my local cafe on Saturday mornings and clip-clop around the joint in their pixie shoes.
Fair enough. I dare say they don't like the fat bearded blob squatting in the corner scoffing down a bacon and egg sandwich dressed in his board short and flip flops (thongs only if you have the limited vocab favored by Lukes).
What's that you say, you've seen photos of Luke and he doesn't have a beard and seems quite fit. Never mind, I much prefer a stereotypical image. Why let facts get in the road of an evocative image.
As I was saying about the fat blobs who parade under the name of Luke, they seem a tad vengeful on the subject of cyclists.
And I sure as hell can't cop the sight before breakfast of a middle-aged lawyer on his third wife wearing a lycra jumpsuit more in line with Cirque du Soleil.
In much the same way as I dare say that middle aged lawyers can't cop a News Corp journalist perving over his third wife as if he's never seen a woman wearing a lycra jumpsuit before. Oh wait, is the lycra jumpsuit meant to be descriptive of the gear worn by the middle aged lawyer. Hmm, maybe it should be more firmly attached to the subject, not floating off towards the end of the sentence like a clown performing verbal gymnastics in the Cirque du Soleil.
Or maybe the sentence is meant to be evocative of a woman wearing a lycra jumpsuit? (As opposed to Superman or Spiderman or a soccer player in lycra). Which raises the question of exactly what Luke finds wrong with a woman wearing a decent lycra jumpsuit? Is it just because it's before breakfast? Once he's shoveled bacon and eggs down his throat, he'd be ready for a perve? Or even some action on the road, where a man's a man and you don't have to be distracted by lycra as you carry out your job of pest control?

But even I've stopped swerving at these road vermin this week long enough to ask: How good is Lance Armstrong?
Oh dear, it's the 'how many points do you get for running over a nun' joke. Only this time it's cyclists as road vermin. And the noble lad's restrained himself because suddenly he's choked with admiration for Lance Armstrong? And after the Tour de France he'll be able to go back to swerving at road vermin in the shape of cyclists?
Well send your cards and letters to Luke McIlveen, News Corp humorist, and expert eradicator of vermin on the roads. Reminds me of that terribly funny time last year when some fifty cyclists were involved in a hit and run crash in Sydney. (Furious driver takes out 50-strong cycle pack).
What a hoot that was. Did those filthy vermin cop it or what. Straight out of the old McIlveen play book.
Next week, Luke explains how road rage is much funnier if you do a Lenny McPherson and stab a tow truck driver in the eye with a handy screw driver ...
Posted by dorothy parker at 3:26 PM