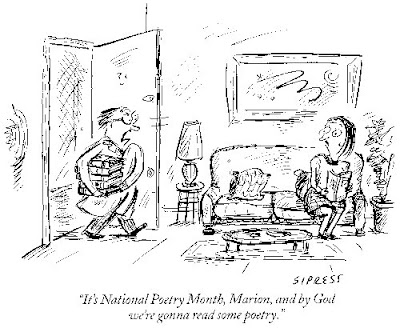 (Above: well actually April is national poetry month, but only in America, and a wet cold July in Australia feels like a good time for poetry, and following in the fine example of News Corp taste for irrelevant leads, why not a juxtaposition of Tim Blair and T. S. Eliot and poetry. Now if anybody googles that text for a link (a) they're mad; (b) they're welcome here in loon pond).
There's an interesting article by Cass Sunstein - in of all places the Spectator - which kind of summarizes its entire thesis and its content in its header To Become An Extremist, Hang Around With People You Agree With.
As one acerbic comment put it, Sunstein is clearly another graduate of the school of the bleeding obvious.
But the obvious is as good a place as any to start when discussing commentariat columnists, because what is apparently rational discourse is often belief based and sustained by group polarisation.
You can't regularly keep churning out drivel in the way of a Tim Blair or a Piers Akerman from a monomaniacal singular obsessive perspective, without it beginning to affect both you and your readership.
Those who don't get it or don't like it switch off, tune out and remain unaware of the fervent group of insiders; those inside, true believers all, become even more fervid, hive-like true believers, paranoid and scathing about dissenters.
It swings both ways, since you can find bicyclists and greenies of a similarly fervid kind, the difference being that these aren't sheltered within the banner of the Murdoch house of fair and balanced newspaperdom.
Funnily enough, it's the herd instinct in allegedly libertarian small government individualistic types that's the most interesting (and entertaining). In the end, they swim like any other school of fish, flock like any other kind of grumpy sheep, conform like any other group of communally minded paranoid dissenters.
The unifying theme is simple: when people find themselves in groups of like-minded types, they are especially likely to move to extremes. And when such groups include authorities who tell group members what to do, or who put them into certain social roles, very bad things can happen.
So why do like-minded people go to extremes? The most important reason for group polarisation, which is key to extremism in all its forms, involves the exchange of new information. Group polarisation often occurs because people are telling one another what they know, and what they know is skewed in a predictable direction. When they listen to each other, they move.

Suppose that you are in a group of people whose members tend to think that Israel is the real aggressor in the Middle East conflict, that eating beef is unhealthy, or that same-sex unions are a good idea. In such a group, you will hear many arguments to that effect. Because of the initial distribution of views, you will hear relatively fewer opposing views. It is highly likely that you will have heard some, but not all, of the arguments that emerge from the discussion. After you have heard all of what is said, you will probably shift further in the direction of thinking that Israel is the real aggressor, opposing eating beef, and favouring civil unions. And even if you do not shift — even if you are impervious to what others think — most group members will probably be affected.
Tim Blair's an interesting example of obsessive compulsive behavior (and I guess anybody who writes about Tim Blair perforce exhibits the same kind of behavior), feeding his tribe of chooks with specially selected tidbits sure to whet the appetite ... for more of the same. Wholesome corn with tasty chucks of carbon for fibre and goodness.
Today's just another day in TB's world - which is why you can get a story Target Identified, about carbon emissions being a way to shake down rich countries, which in turn leads Blair to shake down Al Gore and his reported increase in wealth.
And below that there's a story Attention Townsville Readers, which announces Blair will be in town to observe local carbon management projects (nee Super 8 car racing) - a joking reprise on the main carbon theme - and down the page a story about Global Wheeling, which seizes upon a story by the LA Times that the giant Melbourne ferris wheel broke down because of extreme summer heat (when The Sunday Age report on the investigation noted design and construction faults).
Silly LA Times - it's the Victorian rail system that breaks down regularly from extreme heat.
And if you can be bothered, on the previous day the story is about Al Gore comparing the battle against climate change with the struggle against the Nazis, and chortling about the way the story was amended to a new metaphor evoking Britain's fighting spirit under Winston Churchill, and below that random resentment about Tim Flannery copping 50k a speech and scoring a new car. And naturally hick town Bundanoon cops a bucketing for proposing a ban on commercially bottled water.
It's an exhausting, relentless form of monomania. It almost comes as a relief to realize Blair actually likes to watch the losing Australian cricket team, full of losers, go round the village green, and has a spare moment to remind us of a couple of young women who lunged at TV weatherman Tim Bailey (but what is it with all these TB's?).
But is his paranoia driven by a love of V8 super cars and a fear that we're in last days for the gasoline age?
Day after day Blair rolls out the commentary, on a climate change crusade, calling the flock of faithful to a daily obeisance. And the very things they mock Al Gore and his flock for, they do in the same way, like a black mass really only reinforces the elements of a white mass.
No room for hesitant thoughts, reflections, pious doubts and fears. No room for doubters or dissident scientific reports, or uncertainties about the issues.  No, the matter's settled, and that's the end of it, and everything after that is gadfly mockery and raillery.
Some people try to talk about real science, and perceived inconsistencies in reports by Blair, and the helter skelter nature of what he says, but really that's like an atheist trying to bring down a fundamentalist by talking about the lunacies in the book of Leviticus.
In the end, it's a waste of time and a waste of breath, for the true believer has an unshakeable belief in the righteousness of belief.
Do I dare
Disturb the universe?
In a minute there is time
For decisions and revisions which a minute will reverse.
For I have known them all already, known them all:—
Have known the evenings, mornings, afternoons,
I have measured out my life with coffee spoons;
I know the voices dying with a dying fall
Beneath the music from a farther room.

Which is to say that an incessant barrage, a constant mockery, a relentless ridiculing doesn't really constitute a scientific method, or a rational discourse. It's more like a religious revival meeting, a faith session wherein the converted get together and chant their catechism. And boy do the readers in TB's patch know their catechism. (But let's not get into the comments section, please anything but the briar patch).
And of course if you disagree, or even equivocate, you're just an outsider, a heretic, an unbeliever, who must by definition believe in the opposite of whatever the believers believe in.
Ah well, never mind. Time to slip in a bit more T. S. Eliot, and The Love Song of J. Alfred Prufock, perhaps the greatest hymn to weariness and doubt penned in the twentieth century:
I grow old … I grow old …
I shall wear the bottoms of my trousers rolled.

Shall I part my hair behind? Do I dare to eat a peach?
I shall wear white flannel trousers, and walk upon the beach.
I have heard the mermaids singing, each to each.

I do not think that they will sing to me.

I have seen them riding seaward on the waves
Combing the white hair of the waves blown back
When the wind blows the water white and black.

We have lingered in the chambers of the sea
By sea-girls wreathed with seaweed red and brown
Till human voices wake us, and we drown.

Oh yes, till News Corp voices wake us with their incessant chatter, and we drown. Time for a peach ...