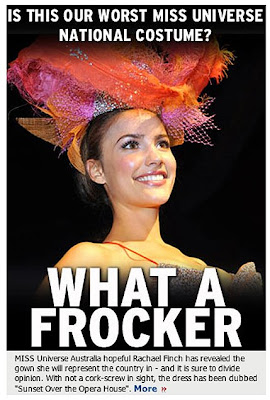 (Above: part of our ongoing celebration of hard hitting, full of integrity News Limited journalism, as celebrated by John Hartigan, and claimed to ensure the future of the trade).
What a frocker is always the first thought that comes to mind when we're dealing with a column by Michael Costa, one time Treasurer of NSW, and now neo con ranter for The Australian.
You know we've already got a contest going to see how many things available on News Limited sites could be stuffed behind a pay wall, with the expectation that fools would pay for the privilege of accessing it and the rest of the world would be sheltered from it.
Bernard Keane cites Six pieces of News Ltd we'd like to see behind a paywall, and who could argue with his choices - after all Christopher Pearson and Angela Shanahan are no brainers, while Andrew Bolt is such an odds on favorite no one could bet against him.
But I have to pick a bone with him. He didn't mention Janet Albrechtsen, or Greg Sheridan or Piers Akerman or Michael Costa.
Keane ducked the far reaching implications of his idea. He really should have called it the top one hundred News Limited features we'd like to see behind a paywall, and then gradually mopped up the thousand or so other features over the next year or so (sob, I'm so sorry, I didn't even list the Colebatchian moments of splendor).
Really a neo Costa like neo Michael should be a hot contender for the top ten, not just the top one hundred. Take today's column - please take it and bury it anywhere you can find a rotting dog's bone - which goes by the header Not so super markets.
It is of course a prerequisite for a commentariat columnist to display humbug and igorance while showing he doesn't know what he's talking about, and as usual Costa delivers in spades.
What can an ostensible free market proponent make of the cosy duopoly that exists in the Australian retail supermarket sector, without resorting to humbug?
Blather. Or rather cherry pick from the 2008 Australian Competition and Consumer Commission report into the competitiveness of retail prices for standard groceries, which cited drought, increased international demand and rising farm costs as get out of jail cards. (Try being a farmer and getting blamed for the Coles and Woollies hi jack, but that's another story).
This conclusion sits uncomfortably with other observations within the report that seemed to highlight the clear dominance of the majors in key retail sub-categories, such as dry groceries. The ACCC observed "that gross margins have experienced larger increases in categories where Coles and Woolworths have a relatively larger share of national sales".

The report further observed that the more efficient of the two majors, Woolworths, has earning margins among the highest of all international grocery retailers. Whatever the degree of economic rent flowing to the majors because of the structure of the industry, it is clearly difficult to determine.

Nevertheless there is a problem and a public perception that this is leading to higher grocery prices.
Earning margins amongst the highest in the world leading to higher prices? Where do the public get their perceptions from? The sheep. They should just line up in the check out aisles and get shorn or clipped, as the case may be, on their way out.
So where does Costa see the problem? In a word, all we need to do is build more supermarkets.
And we don't simply because of urban planning restrictions. That's right, blame state government planning departments and local councils. It's all their fault for stopping the world from building more supermarkets, and the results are dire:
Retailers in the urban villages can't compete against the price advantages the large volume retailers have and they are limited in their consumer offerings. Eventually the areas become economically unviable and potentially urban crime zones.
Did I mention blather? From competition to urban crime zones?
And while we're at it, blaming everything under the sun, other than Coles and Woollies, how about dangerous radical community activists, who might even be green:
In states such as NSW where local government areas haven't been properly reformed the problem is even greater for retail consumers, due to the greater influence of small community interest groups, who don't even support the restrictive centres policy and seek to eliminate all retail expansion, even within the designated centres.
Oh no, there are people who think we have enough supermarkets. Surely they must be communists or at least socialists.
So I guess we're left with profound uncertainty:
Until there is a properly functioning competitive market for retail space it is impossible to gauge whether existing retail competition and retail margins are reflective of sound economic factors, or monopolistic rent seeking behaviour.
Come on down cosy mall owners and cosy big two duopolistic retailers, all's well in the world.
Costa has spoken and you can now go off and chortle into your after-work beers, knowing you'll be safe and sound when the likes of Costa get to writing about the retail supermarket situation in Australia.
Oh and as for Choice and the abolition of the Grocery Choice website, which saw the federal government buckle to the demands, and innuendos of the cosy duopolists? Well of course you'd expect neo con Costa to be on the side of the big two.
Has he seen the proposed site in operation, does he know how it might have actually worked before the government killed it five days from launch? Of course not, but never let ignorance get in the way of bliss:
The failure of Grocery Choice will, for political purposes, no doubt be blamed on the major supermarket chains. The reality is that with or without the co-operation of these supermarket chains, this was a ham-fisted way to address retail competition.

Eer for political purposes the blame is being fixed on the site, which no one has seen in actual operation. You know, because they're just a ham fisted bunch of consumerists. Who else to blame but Choice. Definitely not the big two or the federal government:
Despite the claims of Choice, the self-appointed friend of consumers, there was no chance of the website working properly or gaining broad community participation. The problem for consumers has never been information; it has been a real lack of competitive alternatives at the point of the actual retail spends. If Choice wants to bat on with Grocery Choice it should do it at its own expense, not with taxpayers' funds. A subscription-based service will prove whether there is a real public demand for this sort of information.
Self-appointed friend of consumers? Well I guess that makes Michael neo con Costa the self appointed friend of blather or of the big two, Woollies and Coles.
Funny isn't it. In a column where Costa claims that there is no way of working out the implications of current pricing policies by the big two, he decries an attempt to provide transparency in pricing. A transparency the big two stormed down to Canberra to prevent, by emitting a smoke screen of blather about technical difficulties worthy of a Costa.
Yep, the sooner we get Costa behind a paywall the better, and then we'll see if there's a real public demand for this kind of columnist.
Posted by dorothy parker at 8:22 PM