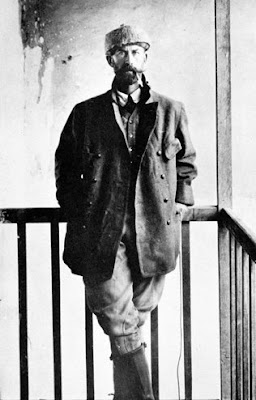 (Above: Colonel Percy Fawcett, a fit subject of hero worship. Sure he disappeared into the jungle, was never seen again and presumably died a miserable death. But remember kiddies, hero worship isn't about who the clay feet of those whom you worship or the irrationality of blind hero worshipping, it's all about how you go about the business of hero worshipping by spinning tall tales and remembering great days of derring do).
Janet Albrechtsen is the blabbermouth that keeps on giving, the punch drunk pugilist that keeps asking to be hit again.
The header for her column, a rousing call to arms for the Liberal faithful, says it all: Liberals must defend Howard legacy.
Yep, the Liberals must rush to the barricades to defend the record of the man the Australian people voted out of power (in a personal literal seat wrenching way) and the record of a government they swept from power with a kind of fierce conviction.
Talk about advice from the deluded designed to ensure the current flock of rudderless chooks stay out of power for the next decade.
Albrechtsen is showing all the signs of what was diagnosed over a year ago as Hendersonoma, a terminal condition involving myopia and hero worship of a Carlyle kind.
There's not much point in doing a gloss of Albrechtsen's work - you can read it all for yourself - but it is elevating to wonder at her state of mind when she pounded the keyboard composing the piece.
Did she have a glass of sherry by her side, wiping away the tears, as she looked fondly on a photograph of John Howard in his green and gold trakkies? Well no, she says there's no time for tears:
Howard’s point is that right now, in the midst of the global financial crisis, there is no more important time to defend the economic legacy of the Howard government. Not as some teary remembrance for lost times or things past. But as a straight directive to voters at the next election that the Liberal Party has a proud track record as economic managers.
Okay, scrub the tears, but still I have a suspicion of smudged, smeary scrapbooks full of melancholic memorabilia being poured over with a wry smile tinged with fond sadness. Saying farewell to a fallen hero is hard, and to some impossible.
Next time you mock Michael Jackson's crazed fans for their current bout of inconsolable misery, remember that's nothing up against the emotional turmoil and sense of loss of those noble warriors Henderson and Albrechtsen.
But what's prompted the bitter outpouring of grief and unhappiness? Why it's that jolly green giant Joe Hockey with his straight shooting talk. But it seems the varmint didn't hit a rattler, he dry gulched a great man:
Others said the same thing privately last week when opposition treasury spokesman Joe Hockey made an off-the-cuff remark that it was “reasonable criticism” to say that the Howard government spent too much on tax cuts and family benefits. As one senior Liberal MP said, in exasperation, to The Australian: “Which party is Hockey a member of?” To criticise the Howard government for cutting taxes too much is like the Greens now deciding it is bad policy to save too many trees.

The kindest, and perhaps likeliest, reading of Hockey’s comments about tax cuts is that it was a stuff-up. But it is the sort of lazy blunder that the Liberal Party can ill afford to make. On the contrary, it ought, as Howard is now suggesting, to be hammering the point that the Liberal Party has a proud record of paying off debt, building surpluses and growing the economy. If it fails to defend the legacy, the opposition plays into the hands of those who peddle the myth that Australia’s economic prosperity was due only to the mining boom.

Shush Joe. There might be truth in advertising, but there's no such thing as truth in politics. Learn from Alexander Downer how to love your master and wear a stocking in style.
He told The Australian: “It’s not only intellectually important, it’s politically very important to defend the economic legacy of the Howard years because it demonstrates to Australians the virtues of voting for a Liberal government in terms of their living standards and the overall living standards of the country. If people start criticising the Howard government’s economic legacy that’s what Labor wants.”
That's right, mount the barricades to defend a loser, shot yourself in the foot, show how you're lost in the mists of time, and forget about the business of tackling the current demons doing the rounds of Australian society.
Better still, learn from Tom Switzer the art of storytelling, the taller the tale the better. Remember if Colonel Percy Fawcett hadn't got himself lost in the Amazon, he'd have been a member of the Liberal party.
Storytelling is a powerful political art, a point well made by Tom Switzer, the former opinion page editor of The Australian who is touted as a contender in the Liberal Party preselection battle for the Sydney seat of Bradfield. Switzer is not frightened to point out the party’s failings. When talking to Liberals he says: “Now, if I may say so, this is where we, as a party, let our guard down. (Members of the) Australian Labor Party are the great myth makers and great story tellers. But they are not good deliverers. We Liberals, however, are not so good about defending our past and protecting our legacy. And yet we are the great deliverers.

“Indeed, by any proper reading of the past 60 years, we have been the trendsetters in Australian politics and public policy, and Labor has merely been the follower.”
Yes indeed, that's what Australians need. Myth making and story telling. Which is how you can manage to claim that if the recession turns out to be a non-event, no credit to Labor and full credit to John Howard, even though when it looked like it might be a gut buster, it had nothing to do with Howard but full credit to Kevin Rudd. Except of course if the recession turns out to be tricky and on going, in which case never no mind about the starting  point, it all started with the Ruddster.
With a global recession under way, the power of the Liberal Party’s economic record is only heightened. Describing that record as “gold for the Liberal Party”, Downer points out that in November 2007 most voters still regarded the Howard government as very competent economic managers. “That is an enormously important political capital for the Liberal Party to treasure. They should always treasure that capital and therefore they should talk about it, and therefore they shouldn’t distance themselves from it.”

Howard agrees: “If the recession turns out to be more shallow than we expected a few months ago, which I certainly hope will be the case, the Labor Party will say it was all to do with the stimulus and had nothing to do with the starting point.

“If we haven’t talked enough about the starting point, then Labor will win that political argument.
In other days, this sort of nonsense wouldn't have been called story telling or myth making, but simple old fashioned spin, as practised by that dark satantic prince of spin, the Ruddmeister. Now it seems the Liberal party wants to start sounding like Rudd just at the time when Rudd could have been wearing a little thin with the electorate if Malcolm in the middle had decided he wanted to be Malcolm on the outer with his email folly. (And now the best they can do is bring back the debt truck from 1996. Ye gods).
Meantime, dear lord, can we just get over the Howard years. The old man himself has nothing to do now but stay at home and burnish his record, his time in power and his assorted trophies for power walking.
But the more deluded eccentrics go on about the Howard years as if they were a top notch BBC miniseries written by E. M. Forster or Anthony Powell, the more the rest of us just switch off or tune into old time radio to listen to a decent batch of real comedians from the nineteen fifties.
Except of course Albrechtsen's indignant correspondents, strangely anxious to trash the old master's record. Students these days, will they ever learn respect for the ancient wisdom of the tribal elders?
Which reminds me - have I ever told you how big the snakes were in the Amazon in the old days? Fierce, something shocking. Reminiscent of the Communist party, the Labor party, Chifley's bank nationalization scheme, Petrov and the socialist conspiracy, from which we were only saved by the holy godfather Sir Robert Gordon Menzies.
Colonel Fawcett knew how to deal directly with those snakes:
“I sprang for my rifle as the creature began to make its way up the bank and smashed a .44 bullet into its spine…We stepped ashore and approached the creature with caution. As far as it was as possible to measure, a length of 45ft lay out of the water and 17ft lay in the water, making a total of 62 ft…”
- From the personal diary of Colonel Percy Fawcett, 1907 (more about Amazonian snakes and links to Colonel Fawcett here).
(Below: men standing around a giant socialist inclined snake. Ah there were real men in those days, scientific slayers of socialist serpents. I remember them well. Did I ever tell you the story of how a snake found its way into the local corner store. A big tiger it was, glowing and gleaming in the dark, as if a member of the USSR had found their way to Tamworth ...) 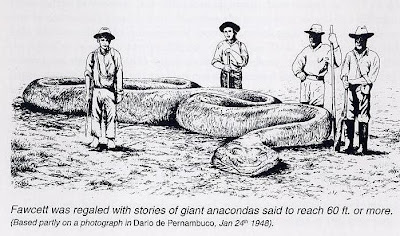 Posted by dorothy parker at 8:12 AM