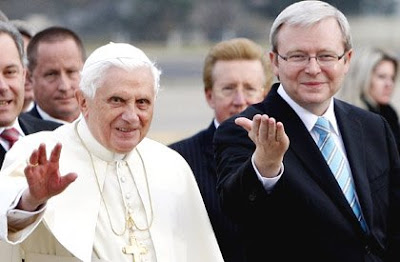 (Above: on the right Pope Rudd issues a blessing to the commentariat columnists of the world, with a particular benediction to Janet Albrechtsen. On the left is some kind of parish priest god botherer, name unknown at time of writing).
You might recollect where Janet Albrechtsen was during John Howard's sordid dance with the Exclusive Brethren, a pernicious cult destructive of the family values he purported to hold, and now with its paws in the funding of private religious schools.
I don't. You might recollect where Janet Albrechtsen stood when John Howard and Peter Costello went off to sing along with the clap happy crowd at Hillsong. I don't.
You might even wonder what she had to say when only this year Peter Costello issued his fatuous Australia Day message to a bunch of fundie Victorian loons who subsequently claimed that the Victorian bushfires were the result of God's response to abortion law reforms. I share your sense of wonder.
You might even wonder where she is when Senator Steve Fielding trails his Family First religious convictions behind him like a blaze of glory - especially when he seeks an audience with Al Gore to soothe his doubts as to the reality of climate change. Isn't that a little like asking the anti-Christ for an explanation of the reality of heaven? Seeing as how Tim regularly tells me Al Gore knows nothing about science. Which makes Fielding's grandstanding a prattling befuddled kind of religiosity and knavery.
But in PM proves a convert to the politics of faith, we're left with no doubt about what she thinks of Rudd's regular display of Christian piety - it gets up her nose.
Which is about the first time I've thought there was a useful purpose in Rudd's Christian posturing.
Apart from her complaint that Rudd has turned into a public Christian - a complaint I can't ever remember reading her make about Peter Costello - she has an even more heinous charge:
Midway through his term as Prime Minister, whatever else one thinks of Rudd, he has proven to be a political operator of the highest order. He is a master of political manipulation.

Learned well he did from the master. You know, John Howard. But now it's a crime to be good at the game?
Well if you're on the wrong side. It's a bit like watching the toads demolish the cockroaches. Sure we all love the skills involved in the game, but not if it means the toads winning. Fuck that notion that what's good for the game is greater than the particular result. You can already feel Albrechtsen bunkering down, settling into the bomb shelter, thinking my god, another four years of Kevin.
Which is why she does her best to tag him on the subject of religion.
Under John Howard, any conservative MP who touted their religious beliefs was consistently treated by the political cognoscenti with derision and not a little suspicion. Books such as Marion Maddox’s God Under Howard claimed religion had been co-opted for sinister political purposes by conservative politicians. This was a hot topic for discussion. However, the sort of cynicism that informed much of the commentary about Howard’s apparent embrace of the religious Right is missing in action these days. Yet no Australian prime minister has used religion for such overtly political purposes as Rudd.
Except John Howard. Learned well he did at the feet of the master.
Because Howard and Costello and Tony Abbott consistently displayed their faith (or in Howard's case his faith that faith would deliver him votes) as a dog whistling trawling to the electorate. And when  it worked the pack of commentariat columnists thought it a jolly fine thing, shoring up western civilization as we know it against deviant perverts, secular liberals and rampant Islamics.
But the funny thing is that to make her charge stick about Rudd displaying his religion, Albrechtsen has to do the time warp, and go back to the days before he became PM - discussing the God factor in a May 2005 interview on Compass, and publishing an essay on Faith in Politics in October 2006:
During that Compass interview in 2005, Gillard castigated Tony Abbott and then deputy prime minister John Anderson “for putting matters of faith more on their sleeve” for political purposes. Much of the media agreed with Gillard. What would she—and they—make of Rudd’s 5000-word Faith in Politics essay in October 2006 when Rudd openly touted his religious fervour, writing at length about German theologian and pastor Bonhoeffer, the social gospel and his Christian faith? Not much. A more intellectually honest and genuinely sceptical press gallery might have explored Rudd’s expedient embrace of religion back then. It may have asked why Rudd’s various “convictions” seem to appear on his sleeve at only the most politically opportune moment. They didn’t.

And they still haven’t.
Now here's the tortured logic. Way back in her column, Albrechtsen has to admit that Rudd can legitimately claim religion has always been a part of his life - born a Catholic, shifting to the Uniting Church, ending up an Anglican, and just loving it when he can hand over some dinkum Aussie wine to the Pope.
So how is it an expedient embrace? No, the thing that gets up her nose is that Rudd seems to be getting away with what John Howard did all the time:
Had Howard written such an essay, the intelligentsia would have whined about a breakdown in the separation of church and state. By contrast, the silence on Rudd and religion grows more baffling as his politicisation of God grows.

Memo to Janet. Shock, revelation. God is political. Or at least his (or her if you will, you feminists) representatives are, not having seen god cast a vote at the last election.
During the Compass interview, the narrator noted that “Kevin is wary of outward displays of religious piety, so pictures of him worshipping and praying were off limits”. Now, Rudd frequently does doorstops with the press the moment he steps outside a church on Sundays, perfect footage for the Sunday news bulletins. Now, there are photographs of him and his wife praying.

The PM is fortunate the media has extended to him the sort of long honeymoon that even the most amorous newlyweds never manage.
Well yes, and you can just imagine the fun the media would have if they turned up on the Sunday outside church and Rudd told them all to fuck off. No, it suits them, and it suits him, and so the pieties in Australian life continue as one kind of conservative takes over from another.
When Rudd struck out at media treatment of him in recent weeks—particularly at News Limited newspapers—it was clear he had grown too accustomed to media lapdogs. That is especially apparent in the media’s feeble refusal to explore Rudd’s religious opportunism.

If the media chooses to look, it may find our man in the Lodge is so full of hubris he uses his religious views for some particularly base political purposes. Bonhoeffer would hardly approve of that.

Of course John Howard has already proven that you can't attack a politician when he espouses Christianity, or even when he does a dance with a cult like the Exclusive Brethren. It just doesn't fly. The religious lobby still cuts a rug in the modern world. Which leaves poor old Albrechtsen hyper ventilating in the corner.
But there's a deal to be done here. If Albrechtsen spends a few columns deploring the use of religious convictions on the conservative side of politics - damning Tony Abbott and his coat tailing of Catholicism, and tearing into his new book, ripping into that dummy Steve Fielding and his family first values, deploring the decay of secularism in politics by both sides - she'd certainly get an audience amongst secularists.
Heck, why stop there? Why not a regular spray of articles showing how useless and divisive religion is in the post-modern world. Not just Islam, but all forms - Christian and Judaic for starters, but let's not forget the Hindus and every other kind of pie in the sky show.
But when it's just a whine about how Rudd is doing what Howard did for years, and he's doing it well enough to get re-elected, there's a smug satisfaction that at last she's getting to choke on the wafer like secularists did during the Howard years.
But wait, there's even more bad news for Albrechtsen. Not only does the pope meet with the likes of Rudd,  it seems Benedict XVI might be going socialist in his latest encyclical Caritas in Veritate (and it's 30,000 words long, so it must be right):
... a great surprise in Benedict's encyclical is the way he highlights Pope Paul VI's 1967 encyclical, Development of Peoples, as the most significant Catholic document about the ethics needed to confront current global perils and poverty. Pope Paul's urgent call to action stirred Catholic social reform movements mightily, especially in developing countries, where most Catholics now live.

Benedict wants to inject renewed commitment into the global struggle for social justice and human wellbeing as "the heart of the Christian social message". Neo-conservatives in the US and elsewhere will be very upset that Benedict has, like preceding popes, recommitted the Church to engage more vigorously in the struggle for social justice as part of its essential mission. Leading Catholic neo-cons Michael Novak and George Weigel have been prodigious in extolling US free-market capitalism as the embodiment of Catholic social principles. Weigel has now protested that the Pope has been conned by justice and peace circles in the Vatican.
(there's more here at Pope's worthy plea up against market forces).
Tony Abbott, Kevin Rudd, and the pope, and only Janet Albrechtsen to man the pumps and clean out the bilge. But don't worry Janet, I'm right behind you, and thank the lord you offered to go first ...
Just remember one thing. God is political. Some even suspect he's the ultimate politician. He knows how to spin and he knows how to offer pie in the sky ...
(Below: poor Tony Abbott, clutching a photo while Kevin Rudd gets to drop off Aussie plonk in Rome. Where's the justice in that? Oh my lord why have you forsaken me? Heli Heli lema sabacthani hoc est Deus meus, Deus meus, quid dereliquisti me?) 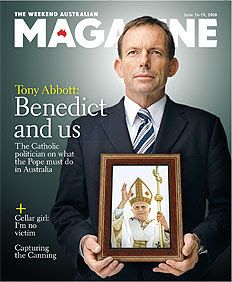 Posted by dorothy parker at 7:40 AM