Tim Andrews, Jeff Koons, bodacious babes, and a plan to save Australia and turn it into a free market pond 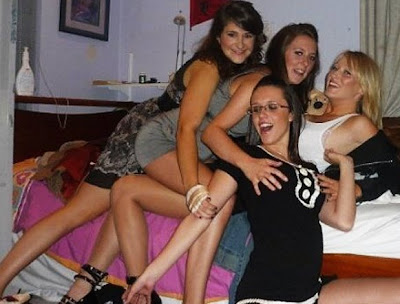 (Above: bodacious babe Young Liberals as celebrated by Tim Andrews).
The intertubes is a fickle and cruel world. It's full of jealour malice and little green rats that gnaw away at your heart, which admittedly isn't so cruel as the pink elephants that tormented my grand pappy once he got into the moonshine (come on grand pappy tell us again about the Somme in the winter of 1917 and how it turned you into a raging drunk).
And sometimes I wonder how it is that Andy Warhol's allocation of fame has been reduced from fifteen minutes to fifteen seconds. That hardly seems fair, after all, it's hard work being Jeff Koons and marrying sex workers and making flower puppies (now residing in Bilbao) and finding you have to reduce the prices for your pieces from 20 to 10 million.
And can you now recall Tim Andrews, who briefly achieved notoriety by putting pictures of bodacious Liberal babes on his blog, some of them reading Ayn Rand? That's still the thing I can't get over. Ayn Rand!
It was like an act of hatred, like the cutting blow of a lash encircling her body: she felt his arms around her, she felt her legs pulled forward against him and her chest bent back under the pressure of his, his mouth on hers (Atlas Shrugged).
Well it's good to know that minor skirmish with the shallow sordid world of Murdochian tabloidism hasn't put Tim off blogging or conspiring to change the shape of Australian politics.
How I Plan to Dedicate My Life to Reforming Australian Politics is his latest clarion call, in which he announces his plan to fix things up by making Australia a free market in everything (especially rough trade porn, I hope, for the sake of young Liberals everywhere).
Now I don't have a problem with that, in the sense that politics can always do with a shake up. But I just can't figure the angles. You see, like Rupert Murdoch, Tim says he's become an American citizen.
Most importantly though, I have the fortune of having won that roulette of lottery that is US citizenship, and have taken advantage of it. This, more than anything else, I cannot overstress the value of. Unless you have been here, no-one can actually understand the difference that living in the US makes. The fact that I am immersed in the core of the future of free market advocacy, means that I will have unparalleled skills necessary to be able to do this back in Australia. And these skills are impossible to pick up at home.
Um, but Tim, why not stay in America and fix it up? The Republican party is now barking mad right wing extreme, and if it's to come in from the cold, it needs the help of moderate, sane voices who can help it to the middle. In much the same way as the Liberal party doesn't need rhetoric about serfdom so much as a trip to the middle and power. So what's this about giving up on the Liberal party? Just because you want to set up an activist grassroots free market advocacy organization? (and please use zeee instead of s so your American spell checker doesn't create a fuss):
Obviously, this means that I can no longer be an active member of the Liberal Party. From a personal perspective, this pains me greatly; after all, I have dedicated almost half of my life to serving the Party. I know the personal losses that leaving will cause. Yet is necessary. There is, after all, no way I can objectively advocate sound policy, while I have a vested interest in one political party. Oh don’t get me wrong, doubtlessly I shall continue to be a member, to try to influence people as best as I can. But I cannot – and will not – continue to waste my time with the petty childish sandpit of internal party politics, nor place myself in a position where I can no-longer critique the party from outside.
Um, you're a member but you're not a member? Well if you can be an American and an Australian, I suppose it's the right stance.
But you know at the same time, perhaps you should re-think job advertising on the intertubes. There's no doubt that you have impressive credentials:
Firstly, I think it’s rather important to note that, to some degree at least, I do actually possess a brain and the ability to use it. I don’t know how I can objectively demonstrate this, other than to point out that my UAI of 99.85 (for all the flaws the UAI contains) does place me in the top 0.15% of the population intellectually (and, correct me if I’m wrong, is the highest in the NSW YL’s for the last 10 years or so).

Academically, I have a Bachelors of Economics (Social Sciences), with a double major in Government and International Relations, with a minor in economics. I have a Bachelor of Laws (Honours), with a primary focus in jurisprudence, and the relationship between politics and law. I also have a Masters in Public Policy, again, rather relevant to the intellectual underpinnings of what I wish to achieve.
But you know that's just a bunch of academic qualifications, and we know what we all think about academics. I'd have been more impressed if you'd said bugger the academic qualifications, I just want to make a shitload of money in an entrepreneurial way. The rest of the CV is equally fine, but I do wonder why you want to set up a freemarkets grassroots advocacy group in Australia:
So why exactly do I want to do this. The answer is unfortunately simple: there is no-one else. I mean this by no means out of arrogance, but simply as a statement of fact. There is no-one else who wants to do this. After all, I fully recognise I need more than simply desires, I need concrete skills. So let us look at my skillet as objectively as possible.
Um, okay, let's overlook the skillet business and your persistent refusal to use zeee instead of s, but have you thought of a reverse takeover of the Sydney Institute, run by that desiccated coconut and aging free market figure Gerard Henderson (here)?
Henderson hanging on by the fingernails? Never mind, let's look at your pitch:
I have no doubt whatsoever that we need to set up a free market grassroots advocacy group in Australia. I have no doubt that this is essential if we want to prosper as a society and not tumble headfirst down the road to serfdom. I believe, therefore, that I am the person with the enthusiasm, the experience, and the skills to make this happen.

So help me. Please help me. I cannot do this on my own. I cannot raise the money necessary, I cannot come up with the business plan, I cannot create the strategy by myself. I need your help. So please, contact me, and together, we can change Australia.

If you and I fail, if together we can not start up a genuine advocacy group, then freedom in Australia truly is doomed.
You can't do a business plan? You can't raise the money? You want it all handed to you on a plate? Then truly Australia and freedom are in trouble, and the road to serfdom likely. A degree in economics and you can't do a business plan? WTF. Truly, we are doomed, and likely so is America.
Having thus established the necessity for such an organisation, the obvious question is: why me? Am I really so arrogant as to believe I can personally reshape the Australian political landscape? Is my ego so big that I really think I can bring about that much change?

Well it'd have to be big to think about changing everything without being able to do a business plan. My advice? Either keep on with the bodacious babes, or toughen up, stop the bleeding over the intertubes, and for the love of the lord work out how to do a business plan. Or arrange for a bus to run over Gerard Henderson.
And can the condescension:
The core idea is simple: Create an activist grassroots free market advocacy organisation. Something to take abstract ideas, intellectual theories, and policy papers, and package them into something nice and simple that your average citizen can understand. To set up an organisation to fight in the trenches, to spread the message, to actually engage in the battle of ideas. Australia has some of the best think tanks in the world, in the CIS and IPA, but they are think tanks – they are not ground troop warriors. And that is what we need. And I want to set something up to actually be such warriors.
Dumb it down for the average citizen so they can understand it? The average citizen can do a business plan ... they do it every week in every year. You should get down in the trenches with them some time ...
(Below: bodacious Jeff Koons, and while in Bilboa can I recommend Licor de Hierbas, more potent than acid on an empty stomach. You will outshine Fellini in your dreaming). 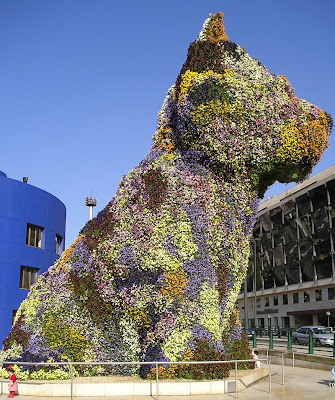 Posted by dorothy parker at 6:14 PM

I was actually born a dual citizen, so never had to take an oath to the US.

Point noted, the best of both worlds. Amended accordingly.