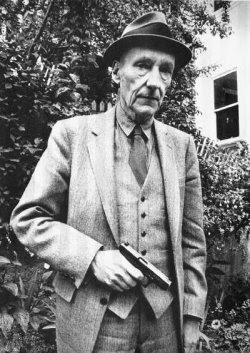 (Above: William S. Burroughs. Even a wife killer is better than Michael Jackson).

Wow. I know the world doesn't need another word spilled about Michael Jackson, but the trashing offered up by Robert M. Kaplan in A talent for lies and abuse is irresistible.
Kaplan, we're told, is a forensic psychiatriat, and author of Medical Murder: Disturbing Cases of Doctors Who Kill, but really you could cite his column as a disturbing case of a columnist dedicated to verbal assassination:
There is only one epitaph for Jackson. He was a disgrace: to his family, his people, his fans, his talent, his industry, his country and to every child who dreams of creating a better life for themselves as an adult without abdicating responsibility for their actions.

Is there any saving grace for the deluded one? Well short of saying that he wasn't Adolf Hitler it seems not. Come to think of it, Adolf was a vegetarian and fiercely opposed to pornography. Could he have been a better human being than Michael Jackson? Perhaps as an amateur painter he might have been a better artist:
Some say that the lack of a normal childhood fostered both Jackson's phenomenal artistry and his regressed infantilism. Yet Jackson was no Elvis Presley, John Lennon or Bob Dylan.
Indeed. Perhaps not even Mozart or Beethoven. But he did okay at pop music surely? No, he was just a minor figure, perhaps not as significant as Frankie Valli and not as legitimate at melancholy as Dusty Springfield, and clearly lacking in the kind of class that distinguished Phil Spector in the twilight of his career:
Jackson started singing at the age of four and, by eight, was performing in the Jackson 5. When he reached adulthood (at least chronologically), he went solo and, in 1983, achieved the world's best-selling album. This was followed by two more hits, after which followed a long slow slide into perdition. American life, as F. Scott Fitzgerald pointed out, rarely permits a second act.
Well yes and I've always thought of Quincy Delight Jones Jr. as a second rate hack whose musical skills in no way match the talent and insight of  Robert M. Kaplan as a music critic.
But you have to hand it to Kaplan, when it comes to whipping up froth and foam on a cappuccino cup of fear and loathing, he's a dab hand. One man standing against a world of hysterical fans, calling it like it is:
The death of Michael Jackson triggered a predictable frenzy of eulogies from individuals who could not run far away enough from him when he was facing child abuse charges.

Simultaneously, from the media perihelion, infused with the spirit of Jerry Springer, arose confessions, observations and revelations about a lifestyle that would have nauseated even William S.Burroughs, involving drug dependence, financial lunacy, lack of concern about the sentient world and disregard for others.

Hypocrisy or schadenfreude aside, the eulogies were unanimous on one point, confirming that Jackson had been successful in achieving his most important goal: claiming the mantle of victimhood as justification for leading an exploitative and predatory life.
Wow. William S. Burroughs. The man who lost his virginity in a brothel, celebrated his rampant homosexuality, and popped his wife Vollmer in a drunken game of William Tell when he mistook his wife's head for an apple. An interesting life all round, but it's good to know that Kaplan is sure Burroughs would have been nauseated by Jackson. In much the same way as Kaplan is. That'd be the same junkie Burroughs who said:
Most of the trouble in this world has been caused by folks who can't mind their own business, because they have no business of their own to mind, any more than a smallpox virus has.
But stuff that, there's tremendous fun in not minding your own business. is there any excuse for Jackson before we cast him into the fiery pits of hell? Perhaps his upbringing and life as a child star? Nope. Whacky Jacko is just whacky, and deserves to be whacked:
Jackson has eight siblings who were exposed to the same environment; why did none of them turn out the same way? Jermaine may not be a rocket scientist and tends to whine at times. One may have objections to the music of Janet, let alone her public wardrobe malfunction, but she is hardly as rebarbative as, say, Madonna. As for the rest of the siblings, who ever hears much of them, surely the best indication of a normal American life?
Being invisible is the best indication of a normal American life? Who is this heretic? Did he miss the age of fifteen minutes of fame and Joe the Plumber? Or what?
As for his parents, they're surely saints, who gave Jackson everything, spared neither the rod nor the child, and did everything in their power to make him happy:
Jackson constantly branded his parents, especially his father, as "abusive", the psychobabble word that conveys instant freedom from responsibility for the victim. Jackson's parents came from humble origins at a time when being black in America was often a one-way ticket to a life of downward social mobility, poverty, crime and misery. To their credit, they refused to bow down to this and like many people from migrant or minority backgrounds they looked to succeed in those areas where sheer determination, ambition and talent will overcome virtually any institutional obstruction: sport and entertainment.

Considering the competition and pressures they faced, they would have had to be as hard on their charges as any parents of talented child stars. The results were little short of spectacular, and their children were given opportunities denied to many others.

Remembering the ghetto life from which he was saved, Jackson should have lit a candle in church every day of his adult life thanking his parents. While it is easy to be snide about their brick pile in the Los Angeles suburb of Encino, they deserve every bit of their wealth.
Sure you can be snide about their brick pile, but the important thing here is to be snide about whacko Jacko, and pass over any responsibility his parents might share in his peculiarities. If you burn a candle, make sure it's a one sided candle, casting light only on the dark side of a festering mind.
You see, it's all just adult choices, and adult decisions that produced the pop star:
Does any of this explain the star's infantilism? Jackson did not have a sweet childlike nature, living in a perpetual Wendy world. Far from it. The evidence at his trial showed that he was a caricature of the cynical, calculated and predatory adult, soaked in booze and drugs, constantly conniving to manipulate children into a coercive environment where he could exploit them as he wished without bearing the consequences.

The outcome of Jackson's adult choices was not pretty. Behaving like a combination of the boys from Brazil and Monty Python, he created a band of captive children; sucked-in con men, sycophants, fools, hags, desperados, even the cetacean-like Marlon Brando; and engaged in an extraordinary career of self-mutilation, usually via surgery, making him a body dysmorphic of extraordinary degree. He used so much mercury to lighten his skin colour that he went prematurely bald, side-effects not seen since it was used for treatment of syphilis in the 19th century.
Wow. Stop it. Enough already. Jackson is without doubt the worst human being ever to have moon walked on this planet. And yes I'm including Howard Hughes in that! Or any other celebrity weirdo you care to bring up, from Casanova to Keith Moon.
Sure I sometimes get out a couple of Jacko's early CDs and play them, but I feel worse afterwards than if I'd been exposed to salacious pornography of the dirtiest kind. Talk about vile guilty secret musical pleasures.
But then I began to have some doubts, even wonder if there was something to be said for the poor unhappy and bizarre life of Jackson. Even wonder if the pain of his eleven year old daughter, so poignantly expressed and never no mind how she was brought into the world, might allow a redemptive moment.
No, there's no room for shade or light or subtlety or nuance in Kaplan's world. He has the grace, wit, understanding and emotional range of a sledgehammer or a wrecking ball aimed at the brickwork of Jackson's life. But it was only when he broke Godwin's Law that I realized he'd gone a yard too far:
In claiming that he wanted nothing more than to recreate the imaginary innocent sweetness of childhood to make up for what he had lost, Jackson was perpetuating a lie of such magnitude that only Joseph Goebbels - who said that the bigger the lie, the more people want to believe it - would have approved.

Only Joseph Goebbels would have approved! You know, Kaplan could have saved himself the trouble of writing the column if he'd just quoted the lyrics written by Rod Temperton and sung by that Goebbels approved lad:
It's close to midnight and something evil's lurking in the dark
Under the moonlight, you see a sight that almost stops your heart
You try to scream but terror takes the sound before you make it
You start to freeze as horror looks you right between the eyes
You're paralyzed

'Cause this is thriller, thriller night
And no one's gonna save you from the beast about strike
You know it's thriller, thriller night
You're fighting for your life inside a killer, thriller tonight.
Well at least it makes a change from reading about how we should still be worshipping John Howard. Ah, The Australian, the Murdoch rag that just keeps on giving. And remember nothing exceeds like excess. Kaplan and Jackson both prove it.
Next week: Exposed, the role of pop music in creating the pedophilia that saturates the full to overflowing intertubes.

I read this piece by Kaplan and found it to be one of the creepiest about Jackson to date. Not because of the late MJ-but that a so-called 'forensic psychiatrist' felt he could diagnose Jackson without having ever met him. In fact, Kaplan's credentials should be questioned.

Since when did a family all brought up in the same conditions all exhibit the same character traits ?. And how in the hell does Kaplan know anything about the others in the Jackson family and feel qualified to comment upon them ?.

Apart from Kaplan's moralising tone and his condemnation of a lifestyle that apparently didn't fit whatever role Kaplan decrees is the correct one, he like all Michael Jackson's other critics fail to note the obvious and glaring inconsistency in the charges leveled at Jackson. Despite 2 attempts to pin pedo charges on Jackson , with a 'not guilty' verdict in one and a very dodgy settlement in the other that reeked of blackmail, not one other accuser has stepped forward even after Jackson's death.

Kaplan certainly deserves, earns a place on loon pond. The sheer ferocity of his attack provokes its internal undoing, the frothing and the foaming leading to an incoherence worthy of the best of our residents.