Piers Akerman, queue-jumping elephants, and a man so green the greenies turn purple with envy 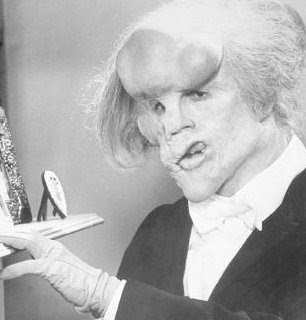 (Above: the elephant man, in a film by David Lynch, which has absolutely nothing to do with this story of elephants but suits News Corp's insatiable appetite for the sensational).
Wow. For a moment there, I thought the acid flashback had kicked in so hard, that I was seeing pink elephants.
But instead I was just reading Piers Akerman, using a story about elephants to parade all his standard prejudices about greenies and queue-jumping asylum seekers. It's all here in Thong Dee had more documentation than queue-jumping asylum seekers.
Which you could summarize as - if you're human and seeking asylum, get lost, but if you're a lovable elephant, come on board honey chile.
Let’s hope our new baby pachyderm (from the Greek pakhudermos, meaning thick-skinned) lives up to his scientific name and pays no heed to the elephant-deniers who wish his mother had never come here.
That’s right. There are Australians who fought for years to keep new mum Thong Dee and her sisters out of Australia.
Who are these traitors, these elephant deniers? Well that busybody, the RSPCA for one, running the specious line, full of arrant nonsense, that Thai elephants should stay in Thailand.
Can't they see that elephants are so very different to people, because we all know that Thai refugees should certainly stay in Thailand, and anybody else from anywhere else should comprehensively bugger off.
... the real argument was that the zoos were bringing the elephants in for secret commercial purposes. Conservation, argued RSPCA chief Hugh Wirth four years ago, was a smokescreen.

“The zoos want the elephants because they are zoo icons the public flocks to see,’’ he said. “It is well known and accepted that elephants do very poorly in zoos ... they suffer through boredom.’’

No, never. Surely zoos wouldn't use elephants to lure the crowds, in much the same way as the circus used to land in my old home town of Tamworth with a gaggle of elephas maximus to beguile the punters (strange how Akkers portentous pulchritudinous pretentiousness is catching, like swine flu). The ponderous pachyderms  always looked bored, but perhaps that was a kind of zen pose, and they were actively engaged in communicating with the thetans on their home planet.
Poor Dr. Wirth made the mistake of suggesting the elephants might not breed in Australia, creating a chance for the ponderous Akerman to pounce.
Speaking of arguments without merit, Dr Wirth, four more of the new Australian elephants are pregnant and due to calve over the next 18 months.

While the RSPCA, the International Fund for Animal Welfare and the Humane Society International were taking court action to block the arrival of the young females, Taronga and Melbourne Zoos were building new facilities and hiring staff to run the elephant conservation program and provide care for any offspring.

The elephant conservation program? Suddenly Akkers is a strident supporter of conservationism?
Give me a break, stroke me with your trunk and feed me an abundance of peanuts. For the love of god, it's just a bloody zoo, which needs a flock of elephants to make the punters turn up and hand over their cash. We're not talking about elephants roaming wild and free in their native fashion in the streets of Mosman. We're talking about a fake Hollywood environment worthy of Jurassic Park designed to house "Wild Asia" in Sydney Harbor in a fake "Asian rain forest environment."
Fine if that's how you get your jollies, because you can't afford an air fare to the real wild Asia to our north west, but let's not get excited about how it's an intrinsically meaningful and noble response to the desperate situation of Thai elephants.
But it is kinda funny how Piers can get so noble and excited about elephants, and be strictly hard line martinet when it comes to people. The reason of course is not so much love of elephants as that the elephant debate gives him an excuse to put the boot (stainless steel capped) into the body of the useless greens. Hopefully that might even induce a case of elephantiasis.
The claim exposed the fact that Ms Rhiannon had once worked at Taronga Zoo for 12 weeks, in the bird section, and had no known knowledge of elephants. Thong Dee and her fellow travellers actually had more documentation than the majority of unlawful queue-jumping refugee seekers currently receiving benefits on Christmas Island, but that didn’t deter the elephants’ opponents.
Akkers himself of course has a masters in anthropological perversity and fecundity, with a diploma in misanthropy and misogyny, backed by a thesis on why gays and greens should only mate with hump backed whales. In short, bugger off humans, only profitable entrepreneurial Wall Street inclined elephants deserve refugee status.
Ignorance is never an impediment when the Greens and their fellow hand-wringers see a soft target that makes a profit, and while there is no doubt that people will go to zoos to see elephants, the protesters’ claims that the elephant conservation program was doomed from the outset have been shown to be codswallop.
While it would be wonderful to see wild elephants in the wild, the fact is most people will not have that opportunity. Not only is the wild shrinking, but some species are disappearing.
Yep, news flash. Some species are disappearing, but as man (and that subset woman) has been given dominion over the earth, it's only natural that the wild be shrinking and keep on shrinking, and that henceforth conservation be practiced in cages - real estate pricing for cages and profit centre viability permitting.
But you say, you bleeding heart, won't someone think of the elephants? Roaming wild and free? Crashing into trees and smashing them down in a natural way. Nah, ship them to a fancy cage in Taronga Zoo.
Not that I give stuff about the disappearing elephants, or climate change or global warming or the vanishing wilderness any of that greenie crap. Die elephants die, which of course you German speaking Bart Simpson enthusiasts know only means The elephants the.
But what I do find funny is Akerman's sudden, peculiar conversion to cage driven conservation - after ranting for years about the environment and the greens, it turns out that Piers is such a green you can barely catch up with him as he disappears up his very own fundament.
We haven’t heard much about it, but the population of unique Christmas Island pipistrelle microbats was last reported to be as low as just four individuals and may already have gone the way of the dodo.
Well jerk my chain and shed a tear for the dodo and the microbat. You asylum seekers have got so much to answer for, seeing as how it's your fault that Christmas Island, on Piers' specific advice, has been turned into a penal colony.
But you know, a chappie can only go so far on conservation matters before political and security considerations have to enter the equation:
While Thong Dee and her yet unnamed male calf are the toast of the town, Adelaide is due to receive two giant pandas, Wang Wang and Funi, in October.
There is every possibility that they, too, will delight the crowds and assist the Adelaide Zoo in meeting its bills.

It is certainly to be hoped so, as the bears eat 20kg of bamboo each day and water is at such a premium in the desiccated state that the entire menu for the pandas will be grown using recycled waste water at the city’s Bolivar Wastewater Treatment Plant.

You know, it's not just the pandas chewing up the water and the bamboo. It won't have escaped your vigilant vision that pandas come from China. It's quite likely they've been wired with all kinds of spy devices, and might well be directly connected to the intertubes, so that any information they can obtain from innocent Adelaide folk can be beamed up directly via satellite to their Chinese communist overlords (you know, oh look at the pandas mummy, do they know that the No 92 Wing Maritime Operations are stationed at the RAAF Base Edinburgh, along with No 87 Squadron Intelligence, and then - as quick as they can overhear such gay, carefree innocent childish remarks and chew on a bamboo root - the bloody pandas are wiring the news to their Beijing overlords).
Need I remind you that back in May it was Piers who uncovered the fiendish plot by deviant Fu Manchu reds to build an antenna network for the CSIRO virtually adjacent to a top secret joint US Australian intelligence and operations base.
The arrival of the deviant bamboo devouring pandas suggests the plot is moving apace, and in due course it might well be that South Australia (already suffering from the burden of the socialistic Mike Rann) will end up as a coconut, shredded and without a scrap of water.
Oh the indignity. The recycled waste water of  Adelaide used to nurture communist pandas within the midst of innocent Adelaideans. There's a stench which comes from Bolivar, but it's not the innocent smell of bourgeois poo, it's the stench of a communist conspiracy.
But now Piers has nailed it, what can we expect from the do gooders? You've got it, zip:
The Greens, the RSPCA, Humane Society and other noxious busybodies haven’t been as repellent in their protests against the pandas as they were against the Thai elephants. Perhaps the fact that pandas make their own koala-suited money collectors look drab and boring was part of the problem.
Oh those drab, boring koala suited money collectors. Why am I reminded of that classic scene in Idiot Box where the main characters bash up a knob in a koala suit? Worse, why does the image evoke that Australian movie classic Going Down Under aka Meat Pie aka Australian Pie, without doubt the worst Australian movie ever made, and that - given the competition - is something unimaginable.
Well I guess because somehow, ineluctably, they remind me of Akkers giving koalas a hard time.
You see Going Down Under is a terrible and genuinely offensive movie, and not worth a dime. But then what can you say about Piers Akerman dressing himself up as a conservationist and berating the greens, the RSPCA, the Humane Society and other "noxious busybodies", sounding in a righteous way as somehow worse than him?
Conclusion: would I pay to watch Going Down Under? Not bloody likely. Would I pay for Akker' commentariat columnist content? Not bloody likely. Do I want him behind a News Corp pay wall? Too right. Right here, right now.
(Below: a snap from Going Down Under. Don't ask, don't tell what it means, but perhaps if caught in an acid flashback, you might think of it as evocative of certain peoples' attitudes to conservation). 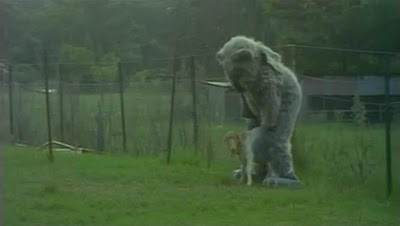 Posted by dorothy parker at 9:36 PM

dot,i hope the filthy digger is bluffing about putting all the loons behind a pay wall as you will have no material to work on and i will have nothing to laugh about.