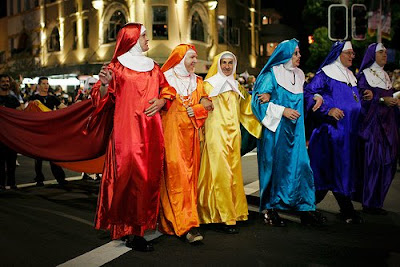 (Above: one for Piers).
It takes a while for the benign mask, the facade of tolerance, to slip from Piers Akerman as he pens his column Gay lords should bite the bullet on Bruno.
The arguments ostensibly over tolerance, and a couple of gays getting upset over Sacha Baron Cohen's character Bruno.
It doesn't happen in the column itself, it comes out in a comment on a comment:
Glenn you’ve given up your own argument. You say the Mardi Gras crowd is camping it up, and I agree but so is Bruno. Let him go. Let people have fun. While I’ve got your attention, I deplore the constant homosexual parade attacks on nuns, particularly; I’ve spent too much time in St Vincent’s Hospice, run by the good Sisters and watched them care for victims of AIDS with the same charity they show all their patients.

Yep, you've got it. The Mardi Gras sticks in Piers' craw. Especially the penguins. So Bruno's fine but gay penguins are bad (especially those naughty gay penguins in the zoo that became parents).
But how to say it, without seeming to be offensive to the gay community (not that you'd ever call them gay, when homosexual will do).

Well natch, that's an easy one. Seize on the couple of gays protesting Sacha Baron Cohen's creation Bruno, exude an abundance of tolerance in the most ingeniously intolerant ways you can imagine, no doubt chortling into the keyboard all the while, and the result's a hell for leather attack on the Mardi Gras:

If it's okay for a couple of hundred men to prance along Oxford St with feather dusters strapped to their backsides during the Mardi Gras, who could be offended by comic Sacha Baron Cohen dressing up like a homosexual fashion designer and camping it up?

Sure, nothing wrong with that. We all love a laugh, and while I don't think much of Cohen's comedy stylings, it's certainly no worse than The Chaser boys sending up dying kids. And the commentariat columnists just loved that routine.
And we all love to dress up as nuns in penguin suits and camp about. Nothing wrong with that. Oops, sorry, forgot that's a tad sensitive. Well how much do we actually like the Mardi Gras?
The Mardi Gras crowd likes to attract attention. For years, Mardi Gras organisers have claimed that their parade draws such a huge audience that, realistically, if everyone they boasted shows up actually did show up they could not fit on Oxford St even if they were jammed cheek-to-cheek, as it were.
Cheek to cheek. Chortle. Not that there's that many cheeks.

The organisers like to proclaim they are proudly out there, sometimes they are offensively out there.

Oh dear, here it comes. Poor sensitive soul Piers has been offended after all, and here I was thinking he was preaching tolerance in the name of comedy stylings.
There is no other display of high-camp behaviour in the homosexual world that matches the Mardi Gras, even if it is getting a little tedious with its tired old attacks on Christianity (but not Islam) and its stereotypical marching boys and dancing queens.
Tedious, tired, stereotypical. Anti-Christian, pro Islamic. And those Islamics are just so tolerant of gay folk.
But don't worry, we all just love poofters, deep down we do, especially when cheek to jowl with Bruno. But aren't the taxpayers involved in this other kind of tedious stereotyping when they should be funded by Hollywood?

The Mardi Gras mob get grants from the NSW Government and the Sydney City Council to fund this display of stereotypes.
Shouldn’t Thompson and Burns be objecting to the expenditure of public money on an event that only reinforces the high-camp image of the gay community?

Yes, it's scandalous, no doubt about it. Public funding for a display of stereotypes. Spending public money on this kind of tomfoolery. But how about getting down and dirty with the agitators?
Burns is a serial litigant. He sued John Laws for using the expression “pillow-biter” during a program and The Footy Show for lampooning Elton John.

The origin of the term “pillow-biter” is interesting. It came to public notoriety when British MP Jeremy Thorpe, a former leader of the UK Liberal Party (not to be in any way confused with the Australian Liberals) was accused of having a homosexual affair with a model, Norman Scott.

During an extraordinary trial, Scott claimed that Thorpe had subjected him to various sex acts during which he had no recourse but to “bite a pillow”. Thorpe was acquitted but the English language embraced a new expression.

Eer, actually not so much the English language doing the embracing, as poofter bashers embracing yet another jolly good expression in their witty armory, along with sundry tabloids of a like mind and kind.
Why not explain at the same time the origins of such affectionate terms as queer as a three bob note, or shirt lifters or wooly woofters or turd burglars or freckle punchers or jobby jabbers or chutney munchers or arse jesters?
All in the interest of discovering how the English language just loves to embrace new expressions. Which happen by a remarkable coincidence to express contempt for gays (unless of course you happen to use those terms for heterosexual couples not above a bit of cock sucking or arse fucking).
But go on Piers, do tell us about the movie:
I don’t know whether or not Baron Cohen’s new film Bruno promotes a stereotypical view of homosexuals. I haven’t seen it.
WTF. You haven't seen it? You don't have a clue about what you're ostensibly talking about. Then WTF is this column all about? Ah I get it, it really is just an excuse to bash the Mardi Gras:

But I do know that it would have to work hard to beat the Mardi Gras’ record for promoting the stereotypical perspective.
Well damn it, let's ban the thing then. But first show us your own impeccable tolerance:

Homosexuals come in most shapes and sizes.

They are not universally limp-wristed, nor do they all lisp, but nor are they uniformly creative or musical or good dancers. They are just people.

Some of them, clearly, like to prance up Oxford St.

Many of them don’t.

And some of them do, and why should Akkers care? Because it's an inverted double flip parallel entry chance at a bit of fun at the notion that gay people might like to dance in the street. He just wants to stir the pot in his usual way.
If Thompson and Burns don’t like the idea of Bruno, they should be even angrier about the Mardi Gras but I can’t find any evidence that either of them have ever complained about the Mardi Gras’ depiction of their friends.

Baren Cohen has done it again. He has outraged a minority, has exposed a deep vein of hypocrisy and probably attracted more viewers than he thought would ever pay to see Bruno.

Speaking of a deep vein of hypocrisy ...
And as always, having stirred the pot and dog whistled away, Akkerman gets exactly the reaction he wanted:
Always beware of a group that can’t laugh at itself.

Well said in your article Piers these outraged folks are the sort that want to have it all their own way.

I’m not anti gay as long as they don’t go around shoving their lifestyle down your throat!

I note, almost incidentally, Piers, that you steadfastly refuse to use the popular term “gay” in reference to the same-sex oriented.
Good on you.
Well I guess I'm not anti-gay either so long as they don't shove a cock down my throat. I keed, I keed, I'm just so tolerant I frequently bend down and stick my bum up in the air. But what else has Piers' pals got to offer?

I think you just “blew” Piers a glowing endoresment. Keep the good work “up” chap.

He’s not denying you to go and flaunt your feather, he’s merely suggesting it’s hypocrisy to want to sue the arse off a straight bloke that’s taking the piss out of you.

On and on they go. Tremendous sport, great fun, slagging off every which way:
Thats actually how the dinosaurs became extinct - one of the Diplodocus’ brought in an early copy of Kylie’s ‘Better the Devil You Know’, and before you knew it there were dinosaurs in mesh shirts and waving glow sticks, grinding up on each other.
And there's more, but really I can't be stuffed trawling through all the half arsed, half cocked comments. Possibly left by rugby  footballers who stick their heads up other boys' bums to show how tough they are? Wait, just one more:
The gay mafia are trying to censor films by trying to ban Bruno. Too many politicians are grovelling and bending over to the gay mafia to get their votes. At least Keating did not, I recall his famous quote that two gays and a cockerspanial do not make a family.
Taxpayers and ratepayers should stop paying the for the Mardi Gras, and it should be banned altogether to stop Aids and drug abuse and voilence by drunken thugs. Sydney should look at how Moscow deals with gays.
And they reckon homophobia is dead in Sydney. In your dreams ...
And John Hartigan thinks quality journalism will save newspapers. In your dreams ...
Akkers hadn't even bothered to see the movie before shooting off at the mouth ... does not knowing what you write about qualify as quality journalism?
(Below: another one for Piers). 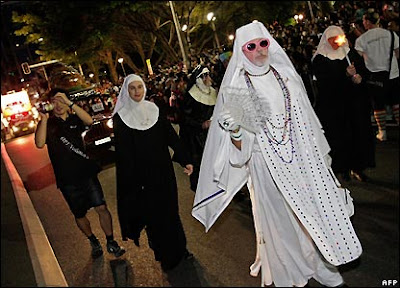 Posted by dorothy parker at 9:20 AM

Have you ever thought of publishing a collection of your obviously well-read and influential columns? I've even got a name for them. How about: "The ramblings of a crank"?

Surely you mean the ramblings of a loon. And welcome to loon pond.