Peter Garrett, Annabel Crabb, Shaun Carney, and a break from loon pond except for a passing reference to Tim Blair 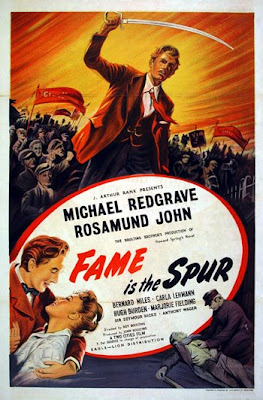 Way back in 1940 Howard Spring wrote a bestselling novel about the rise to power of a Labor politician. The title Fame is the Spur took its name from a poem by Milton, Lycidas:

Fame is the spur that the clear spirit doth raise
(That last infirmity of noble mind)
To scorn delights, and live laborious days.

In the way of things, it was then made into a film by the socialist inclined Boulting Brothers, with Michael Redgrave in the lead role.

The key visual metaphor in the film is the way a sword retrieved from the Peterloo massacre rusts into its scabbard, and when an aged Redgrave tries to get it down and pull it out, the effort is too much for him. He huffs and he puffs and he totters, but the sword of youthful ideals and hope stays stuck, betrayed by old age, compromise and the lust for power and fame.
Inevitably - it being an English saga - Redgrave moves from being an illegitimate child from the Manchester slum of Ancoats to Lord Radsahw, a bumbling old fool in the House of Lords dedicated to preserving what's left of his image.

The metaphor of the sword was so strong that it's stuck in my mind ever since the day I saw it long ago in a now demolished flea pit. It seemed to evoke the image of every failed politician who in the end looks out for themselves rather than their customers - and whenever Peter Garrett's name is mentioned, it sears back into the mind.

Peter Garrett is much in mind these days because of his licensing of a fourth uranium mine. Annabel Crabb does a very nice ambivalent piece which cleverly manages to have it both ways on Garrett.
The brutal, thriving industry that is the modern Garrett hunt manages to skewer Garrett, his hunters, and then find a kind of redemption for the beast in his Labor days, before going on to skewer him and Labor over their current policies in relation to nuclear energy. A couple of sentences reminded me yet again of Milton's insight:
How many of us would trade that for the grub and muck of actual change, the hard and often dispiriting slog of working within the system?

Politics is awful, a lot of the time.

It's full of debilitating compromise and settlements that are a pale shadow of what you'd really like to do.
Oh those laborious days.
And Crabb reminds Garrett and Chairman Rudd that they now have to thread their way through an issue still trembling in the background:
If climate change is indeed the greatest challenge of our time, is it really appropriate to be ignoring one feasible and low-carbon - albeit contentious - solution? Is the Government serious enough about all of this to risk its own political hide?

Not at the moment, it seems, although there are ministers who will readily concede in private that nuclear should be part of the debate.
Yet over in the corner there are old nuclear warriors like Helen Caldicott proposing that Uranium export is the first step to war, as if the days of Dr. Strangelove had never left her (while she also confesses bizarrely to forming a working relationship with that deviant dinosaur Robert McNamara):
Export of uranium ore is therefore the epitome of immorality both from a public health perspective and because it could be responsible down the line for triggering a nuclear holocaust.
Once Garrett would have been on the barricades, shouting or singing into a microphone, and now he's in a daily pickle.
Crabb captures the flavor of the pickle in an evocative way - she's way out in front as a political writer these days, and it's a relief to turn to her after wading through the tripe that constitutes The Punch and if you want to learn a little more about her - why am I unsurprised that she grew up in South Australia? - she was recently interviewed on ABC FM about her musical tastes (here, but be warned this link will expire fairly quickly).
Crabb summarises the situation of Garrett neatly:
On one construction, it's a personal hypocrisy.

On another, it's the most earnest surrender of ego to the democratic process that this Government has seen.

Has it been worth it?

Only Garrett can know the answer to that question.
Garrett's predicament also provokes a sympathetic analysis from Shaun Carney in his column On the borderline, with his conclusion being that Rudd should shift Garrett from the environment ministry to another portfolio:
The public and media reaction this week should provide food for thought for Kevin Rudd. Garrett's responsibility was to act on advice about the environmental impact of the Four Mile mine, not to make a decision on the merits of uranium mining. That had already been taken by the Rann Government, which wants more mines.

And yet, if you cared to ask just about anybody, they'd tell you that Garrett was singularly responsible for a new uranium mine and that he's now pro-uranium. That's the quick, if inaccurate, take on the Four Mile decision.
Crabb and Carney remind me that it's sometimes worth taking a break from loon pond, and especially from the ranting to be found in the Murdoch press.
But the heat isn't going to leave Garrett. It's not just the impending debate with nuclear warriors like Caldicott, up against the Ziggy Switkowskis of the world, and his report suggesting that 25 nuclear power stations could take care of one third of Australia's energy needs by 2050, provoking a howl of NIMBYism Labor was quick to exploit.
Next up for Garrett is the decision regarding the implementation of the Productivity Commission's recommendation to allow parallel imports of books. Will he reject the advice and help out local writers in maintaining a cozy price fixing arrangement (not so bad as adding a cent or two to each cardboard box in the land but in the same spirit) or will he jump into the realm of the free traders?
A realm in which incidentally I discover I live with the likes of Tim Blair, as he shows with Turn page on archaic book laws:
That's another curious thing about these writerly types. If you have a postcode tattoo and chant "we grew here, you flew here", you're an ignorant redneck. If you demand the protection of Australian publishers and seek to keep foreign books off Australian bookshelves, you're some kind of gifted intellectual.

Beats me. Meanwhile, here's my plan on how Australian writers can remain viable: Write something interesting that people will actually want to read.

Phew. At least I can distance myself from his rampaging bother boy book hating rednecked steel toe capped style - I guess that's what happens to a petrol head who resents writers who can write better than him, complete with cheap jokes about wearing novels as socks or using them as toasters. Why next he'll be joking about using newspapers in outhouses the way we used to in the old days.
But it does show the permanent dilemma that Garrett faces, and I wonder each day why he does it. He doesn't need the money, and while he might think he's making a difference, few of his old comrades think the difference is worth a pinch of anything.
What makes Peter Garrett run? Well who knows, even if it's a matter of intense personal curiosity on my part, but in his retirement, I'd hate to sit down and watch Fame is the Spur with him.
Like reading Annabel Crabb's sympathetic but incisive piece, it might be just too close to the bone to be a comfortable experience ...
(Below: Peter Garrett in his youth. Are we all doomed to become de facto Michael Redgraves in a sic transit gloria kind of way? Short memories and every show a sell out? Better to have ideals and lost them than never to have had any ideals at all. If you're not a liberal when you're 25 you have no heart. If you're not a liberal by the time you're 35 you're a fucked in the head Christian fundamentalist? (Sorry Winston think I got that one wrong). 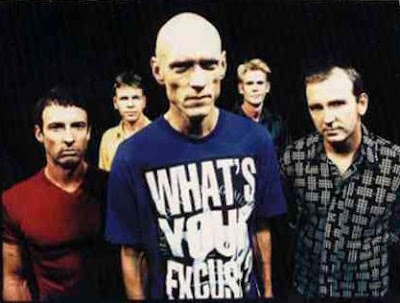 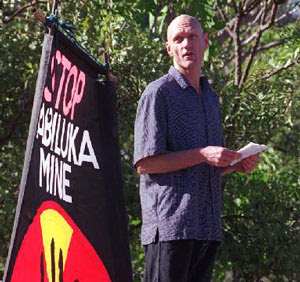 Posted by dorothy parker at 9:29 AM

Have you noticed some things about the people you attack?
They get paid. You don't.
They have readers and responses. You don't.
They have influence. You don't.
I doubt there is another crank on the whole net who writes so much, so obsessively and unremittingly, for so little response.
You really are something outstanding in the pathetic league.

Have you noticed something about what you just wrote.
You wrote something without getting paid.
You clearly are a reader. You wrote a response.
What you read clearly influenced you.
I doubt there's another crank on the whole net who would bother to write in response to an unremitting obsessive for this little response.
But there you have it. There are two of us who are outstanding in the pathetic league.
And welcome to loon pond.