Mark Day, Matthew Robson, troublesome teens and the way ahead for Murdoch rags 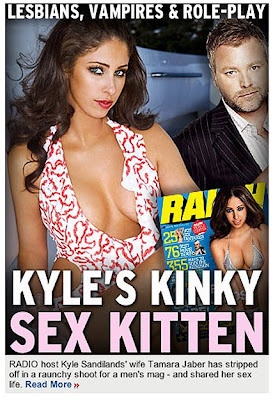 (Above: the Daily Telegraph continuing its online campaign for adult content).
Poor Mark Day remains traumatized by the future of newspapers, when he really should just be facing the future with a 'meh', for what will be will be.
Casting through the runes, fossicking amongst the entrails, he gets agitated by the findings of Matthew Robson, intern at investment bank Morgan Stanley, aged 15 years and seventeen months when he wrote a report on teen media habits picked up by the London Financial Times.
(And if you're interested you can pick up a pdf here, a link Mr. Day should really have provided in this new media world, and if that link drops out, you know how to google).
In Teen as media news guru, Day recycles the alarming news that teens don't read newspapers.
Matthew is blunt when it comes to print.

“No teenager I know regularly reads a newspaper,” he says. “Most do not have the time and cannot be bothered to read pages and pages of text when they could watch the news summarised on the internet or on TV.”

Day recycles Robson's insights into other media - Twitter bad, Facebook good - and teen multi-tasking skills, and things that are hot - anything free, online game playing, free voice calls, phones with large memories and good battery life, and giant screens.
But it's the bit about newspapers that worries Day, and he finds ways to reassure his own fevered brow:
All this provides an interesting window into how a small section of society thinks.

But it is dangerous to assume too much from it—especially the assumption that because teenagers act this way now, they will continue to do so.

It is simply illogical to draw from the revelations of a teen mind anything masquerading as profound insights to future media. It would be wrong to assume that if it is nigh on impossible to reach such a fragmented, flipperty-gibbet teen audience today, it will be equally hard to reach them tomorrow.

Teenagers are going though a phase. We did it in our youth; our grandkids’ grandkids will do it too. Soon the grunts, grunge and spottiness will give way to confident young men and women in their 20s—Generation Z, or whatever name they adopt.

Phew. It's just a phase, like pimples and braces. Soon enough, when they get kids and a mortgage, they'll want to settle down and read a decent set of school league tables in a tabloid Murdoch rag:
And as they enter their 30s, they’ll come to embrace the same issues that consume most mature adults: how to buy a house, where to get the best mortgages, finding the best school for their kids’ education and getting the best advice on health and lifestyle matters. It has always been the way.

In my era, many people adopted the newspaper habit around the time they put their youthful years behind them and settled down to raise families.

But what about all these other digital distractions? What about the full to overflowing intertubes? Will dad want to settle in a comfy old lounge chair and get newsprint on his paws while missus whips up grub in kitchen and kids play cricket in back yard?
Newspapers may find it harder to develop this habit in a future dominated by digital dissemination of information, but people will still want to get their news from sources they can trust.

Like the Murdoch press? With due respect, the only news I'd trust from the Daily Terror is an update on Kyle's kinky sex kitten, knowing that anything said therein should be taken with a grain of salt.
And what happens if older folk confronted by the consistent dumbing down of the Murdoch press begin to take other paths? For example, we were astonished, while picking up tickets at the Sydney Opera House, to see the Saturday Sydney Morning Herald lying in racks - as they do at airports - waiting to be picked up for free by any passing punter, and no doubt counted in circulation figures.
Ostensibly it's a subscriber thing, but no one was guarding the gold and the rags were in essence being given away for free. The only thing going their way was that the punters tend to stay outside collecting another zillion images of the opera house to the quadzillions already available on the intertubes.
When we got the thing home, we were startled to have a paper in the house. We didn't quite know what to do with it. We poked and prodded it, and then my partner went online to get the news, and we both ended up reading The New Yorker and The New York Review of Books, both of which have much better in depth articles (along with a smattering of fiction and cartoons).
In fact, we first began to drop off the newspaper habit when it became clear that most internationally orientated articles and columns were being picked up by Fairfax and Murdoch rags for their hard copy runs. But if Maureen Dowd is available online on The New York Times and the article from The New Yorker is a cut down version of the hard copy that now lands in my mailbox less than a week after publication, why should I pay double for this cheap assed double dipping? Or if I was less old school, I could find online with bonus footnotes?
Whatever you do, don't mention payment for content:
The teenage concept of knowing what’s going on by osmosis will morph into more regular and bankable media habits.

Bankable media habits? Well it's a nifty evasion for that deep question. How to make kids pay when they have more redbacks in their pockets than Uncle Scrooge. When even some older folk have broken through the pay fence and found the free grass greener on the other side?
If Matthew has a message for today’s editors and media managers it is that we should adopt a “horses for courses” approach to various products.

Today’s markets are broken into many sections and subsections, and the notion of one-size-fits-all is deader than the dodo.

Well I guess that means the odd page or two dedicated to comics will soon be lost to the world of tabloids, but the idea that you can save generalist publications by turning them into a one size fits one reader model is a radical, extreme kind of optimism.
For generations the mantra in publishing has been to “down age”: to adopt a youthful profile and attitude in order to attract young readers.

Today, in the face of evidence that young people are not reading, a compelling case can be made for newspapers—particularly our state-based dailies—to be edited to meet the demands and expectations of those that read them: adults.
But what if adults are jack of them as well? What if an adult reader thinks The Punch, allegedly the most intelligent conversation in the southern hemisphere is a bizarre mix of free kicks for passing politicians, airheads and eccentrics with bees in their bonnets.
You can sense each week in Day's writing an incipient nervousness that the old ways are dying or dead, and his beloved newspapers are going the way of dinosaurs and dodos.
I share his nostalgia - I can still remember my father turning up smelling of beer and newsprint, with the long gone Daily Mirror folded and tucked into his trousers' back pocket - but once a habit is lost, it's hard to get it back - unless of course it's something decently addictive, like cocaine.
Newspapers aren't cocaine, nor even a cup of tea. Once the issue of a universal reader is solved, the days of the old generalist rags will truly seem remote and astonishing, and the new forms might in fact find a kind of bankable alternative market. But they'll be so different it would be a stretch to call them newspapers in any meaningful sense of the word.
And there's another problem - while Day provides insights into the media habits of his grandson in Perth, he doesn't once mention piracy or other alternatives which happened to be 'free' in relation to other media.
For example, last year British teens averaged 842 illegal tracks per iPod, and while this year file sharing percentages have dropped, they're still the go, and where they aren't, they've been replaced by listening to streamed music, sharing burned CDs and bluetoothing tracks via mobile phones. And where once music trod alone, now movies and television tread with them.
Above all, anyone - no matter the age - familiar with technology has the capacity for flexibility and a diverse way of getting what they want for free.
In this new digital world - to which anyone with hardware has access to the golden key - to imagine that by targeting adults, and hoping that teens will grow up, settle down and start reading hard copy newspapers, is the way forward in saving hard copy newspapers is fanciful in the extreme.
If Day is right that the young are lost and that down aging isn't a viable strategy, then tabloids like The Daily Telegraph are dying, but just don't know it. But if what he's offering as adult content is The Australian, then it's time for that rag to take a look around at the competition offered by publications providing genuine adult content (and we're not just talking about thinking person's erotica).
Could it be that in fact relentless down marketing is the way forward, while toffy up market rags with 'adult' content get taken over by niche specialist suppliers who can do a better job than imagining Greg Sheridan, Glenn Milne and Janet Albrechtsen constitute a sufficient sampling of world views?
In the end I'm with Robson, and the ability to read or watch when and how you want, on portable devices or up on a big screen. And that's not just a phase. Reclaiming the right to watch a TV show without ads is to hand for anyone with a dvd player. And I like it free, unless the content is so irresistible (or the avi such a good small screen promotion) that I stump up the cash.
And hard copy newspapers bulging with a variety of sections and advertisements found for free in a rack in the city?
Meh.
(Below: the National Library of Australia's campaign to find lost newspapers. Look in the free racks at the Opera House mebbe?) 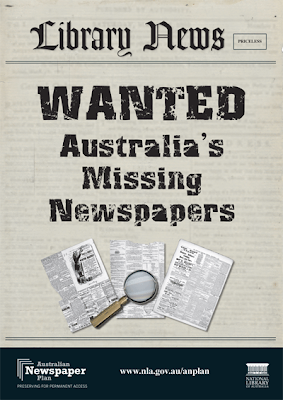 You really eaten up with jealour malice towards REAL writers, aren't you? Anyone who can get PUBLISHED, and PAID and READ in a REAL publication.

Oh sorry, should have added thanks for reading and keep on keeping on with loon pond. Jealour malice is clearly very tasty.

Wow and you do keep on coming back. What's the weather like in WA?