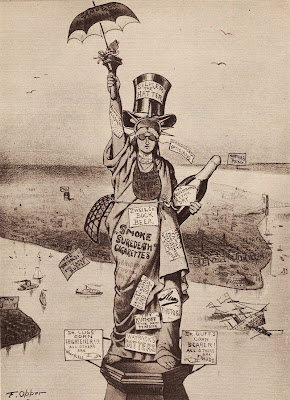 (Above: just a waste of money, advertising, though come to think of it the Opera House would look much nicer decorated with advertisements for hamburgers).

Every so often some great news comes along, and this week I'm indebted to Chris Berg and his column Silly recommendations are very bad for our health for some fabulous findings.
It seems advertising is useless. No, not in the sense that it's irritating and annoying and distracting and interrupts good television programs with three minutes of pumped up in your face sales pitches every ten minutes or so.
No it's functionally useless. Now this might come as a surprise to the advertising industry, which prides itself on being able to target demographics and alter behavior and induce expenditure on the chosen goods of their much loved clients.
Why I've even sat in on meetings myself, and watched as these deluded charlatans went through an elaborate rigamarole explaining the ins and outs of the portfolio of media they'd purchased, and the various astute ways they'd deployed the high class, value for money campaign within the media, and the clever purchasing of slots that they'd done, and the measurable impact it had had (checking by intensive small group and by poll and by a dozen other whirligig power point presentations), and of course the final feather in the cap - the impact on sales, which had made the whole thing worthwhile.
Just a snow job. Lots of word and no meaning. As we all know now from Mad Men, advertising men simply turn up at the office so they can engage in affairs, adultery, and soap like flashbacks to forlorn military pasts while their wives sit on couches and wonder about their sex lives. Anything they pretend to do has no meaning in terms of actual sales, it's just an existential nightmare.
This particularly applies to junk food advertising to children. Now I know at this point some stupid parent will pipe up and comment on pester power, whereby one of their kids has seen something on television, then pester them either to get takeway that night, or roam the aisles of a supermarket looking for the latest schoolyard trend in chocolate feasting, or worst of all, drag you down the aisle of the local K Mart looking for a toy when you were looking for cheap kids' clothes.
Stupid parents. Take it away Chris Berg, explain how silly they are talking about this experiential stuff when we all know it's merely anecdotal:
... we still get vacuous claims about "pester-power" — claims which seem to be driven by the belief that only the government can stop kids nagging their parents.

And why are the claims vacuous? Well because really advertising doesn't work:
There is an almost unanimous agreement among public health lobbyists and the commentariat that the Government should ban junk food advertising to children. But the Royal Journal of Medicine argues there is "no good evidence that advertising has a substantial influence on children's food consumption".

Now you might think this will come as a shock to the advertising industry and to advertisers. After all, the big chains like Maccas and Burger King nee Hungry Jacks waste a moola of money, a mountain of cash, on advertising. Targeting kids. Just like the Jesuits. Give me a sugar and salt and flour and soda junkie until the age of seven, and I'll show you the man (or woman, as the jesuitical plan might demographically target). You've got them for life.
Foolish, deluded advertisers. As our man Berg knows, it's just a waste of time and money.
Perhaps there's a get out of jail card in the use of the word "substantial"? Perhaps there's only a minor influence, so statistically negligible as to be statistically useless?
And there's not just one source for this news.
Our peak communications regulator, the Australian Communications and Media Authority, which has repeatedly looked at the issue over the past decade, agrees.
Which is tremendous news, when you think about it, and when you extrapolate it out to all demographics and all products, goods and services, it seems highly likely that advertising is just a waste of bandwidth and newsprint wherever you see it.
We already know that all those public service ads designed to make us better people or better drivers or more involved citizens don't work, have nil effect. Why as soon as I see one of those finger wagging anti-speeding ads, I know I'm out in the car with a lead foot seeing which pedestrian I can skittle (and commentariat columnists like Michael Duffy have also been known to have a taste for lead footed speed).
But the news that advertising is a waste of time and money might well change all this. Sure, in the short term, let advertisers go on promoting junk food to all and sundry in any way they like. After all, the only downside is the way the taxpayer has to pick up the tab for treating fat, unhealthy people in hospitals because they're too dumb to work out where their super-sized diabetes comes from.
It's the longer term issue I'm worried about. When is Chris Berg, research fellow with the Institute of Public Affairs and editor of the IPA Review, going to tell businesses they're totally wasting their hard won dollars, their precious spend, on the useless wankery known as advertising?
By golly, that's going to change the face of the private sector.
And when the wised up businesses stop spending on advertising, will Chris Berg claim the credit for demolishing the entire advertising industry? And along with it free to air television and sundry other businesses that run off useless earnings from useless advertising?
Now that'd be a real triumph for vacuous claims about the null and void nature of pester power. The more those advertisers and businesses waste their money, the more we ignore them ...
Why the fast food people might even be able to spend a little money on research and come up with something better tasting and healthier than the utter crap they currently sell as turdburgers ...
Though how would we know about them? Time to bring back advertising?
(Oh and as for the rest of Chris Berg's column? Consume, grow fat, and die, and don't expect that the stupid government and the do gooders will help save you from your stupidity).
(Below: what next? Advertising in video games? What a waste of money. Unless of course you like a refreshing coke and a burger after a couple of hours on the couch wasting zombies). 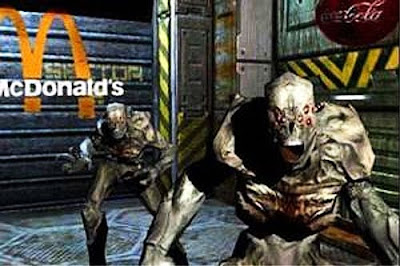 Posted by dorothy parker at 9:09 AM

Well, advertising doesn't work on me. In fact, it has a negative effect: if I'm in the market for a product, I am less likely to buy a brand I have seen or heard advertised.