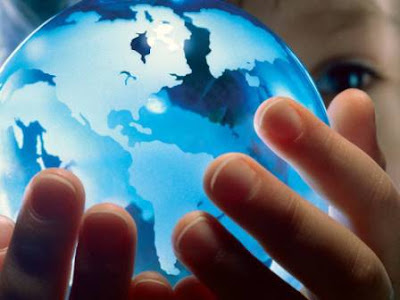 (Above: poignant News Corp image of the precious world in our hands).
It wouldn't be Easter without Tim Blair slagging off greenies, climate change prophets, doom sayers, naysayers and disaster merchants, and sure enough like a regular gadfly, there he is again sounding off in We Are the Future.
But I'm really anxious for Tim, deeply worried. He doesn't seem to have caught up with his fearless leader, who's dedicated to promoting Earth Month 2009: Around The World with News Corporation.
Dear Lord, not Rupert himself. Say it ain't so. And not for just an hour but for a whole month? Surely this global energy initiative thingee is just a hoax, a spoof, put up by those fiendish Russians who also fooled Comrade Conroy and ACMA. Well it does say the global energy initiative is a beta site, but when you start looking into all the corporate blather it contains under sundry headers - what are we doing, what can you do, our blog, resources, video, our philosophy, case studies and initiatives - it does seem very alternative, very caring and concerned. Dare we say it almost pinko, greenie, leftie and utterly dethpicable?
It seems News Corp is totally, fiercely committed to addressing its impact on climate change and lowering the energy use of its businesses.

By golly, and that profound, searching, uncompromising corporate promise is accompanied by such a sweet, yearning blonde, looking ever so concerned about the future of the planet.
And each page of the site is full of splendid news, like the way the telly show 24, that fascist ode to the joys of ticking clock torture, has become the first-ever carbon neutral television US television drama program. Yep, through dedicated efforts by the Fox and Imagine Teams, the show has been able to reduce its season 7 carbon footprint by 43%, thereby allowing for more effective, carbon-reduced torturing of dangerous terrorists.
And then there's the Free and Zero Impact Concert in Rome on Earth Day, featuring Ben Harper and Relentless7, which is going to be streamed live around the world courtesy of Nat Geo Music Channel, a Fox International Channel, coming at ya hard and fast and carbon aware on April 22nd. Like Bono on speed!
Together with much, much more, heaps of caring and kisses, as we celebrate April as Earth Month (that's right not just a feeble Fairfax hour, a whole month).
Lots of great things are happening around News Corp. Read on to find out what's going on at your business. Don't see your division or location here? Check with your Energy Team or HR for details, or plan your own celebrations!
Hey it's a team effort. The word has to be spread. We have to all get out there like Mormons and change the world, make it safe for News Corp to turn a profit.
Ah Tim, I think you're out of step with your fearless leader. I think Rupert's trying to tell you something here. Could it be that Australia's most vocal climate change prophet is now Rupert Murdoch?
Phew, you're right, he's now a Yank, so he must be America's most vocal prophet, and News Corp. its most concerned corporate citizen.
I wonder when, if ever, news will filter down to the colonial outposts like the Daily Terror. Or even Andrew Bolt, whose so thin skinned and thick headed all in the one go, that it might be years before the word ever penetrates his noggin.
Anyhoo, it will be wonderfully delicious when News Corporation decides to engage employees like Tim Blair, and its audiences (you know, like the loons who scribble comments below his daily rants, tirades and abusive, foam-speckled sprays at all the infidels advocating concern for climate change).
I feel so strongly about this that I've taken the liberty of posting a message from chairman and CEO Rupert Murdoch, our fearless leader:
News Corporation has always been about imagining the future and then making that vision a reality. We seek new ways to reach our global audiences and we address those issues that have the greatest impact on their lives. Global climate change is clearly one of those issues. So how do we, as a media company, do our part to confront this challenge?

It starts with us. We must first get our house in order. In May of 2007, we launched a global energy initiative across News Corporation to reduce our energy use and impact on the climate. Our goals are to fully understand our carbon and energy impact, to reduce that impact significantly and to inspire our employees to take action on this issue in their business and personal lives.

We can then do what we do best: educate and engage our millions of readers, viewers and web users around the world.

We also believe that addressing climate change is good business practice. We will improve the bottom line by cutting energy costs and investing in renewable resources. We will motivate our employees. We will excite our audiences. And we will demonstrate our continued ability to anticipate the future and lead our industry.

We have just begun this effort, and we have a long way to go. Our global reach gives us an unprecedented opportunity to raise awareness and to stimulate action around the world.

I invite all our employees, business partners and audiences to join us in this exciting initiative.

Posted by dorothy parker at 2:04 PM