Piers Akerman, Currawong, environmental activists and the way to save the world 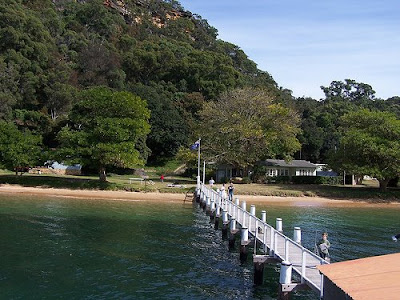 (Above: sweet Currawong, its salvation celebrated by a newly green Piers Akerman).
Who'd have thought it? It turns out that Piers Akerman is a fiercely dedicated environmentalist and conservationist, and not the caricatured supporter of business and global warming you greenies contend.
Amazing, because last time I read Piers I could have sworn that greed was good, business was great, concrete essential, tar agreeable, and tree hugging environmental activists and greenies about the lowest form of life known to exist on the planet.
Indeedy, it wasn't so long ago he was advising us that killing all the sharks in Sydney Harbor (at least net them with gay abandon) should and would be high on the agenda if it weren't for greenie councillors and their pathetic ilk.
But yes it's true, Piers has had a greenie revelation, and all because the Labor Council wanted to score some cash by putting its sheltered beach side socialist haven for unionists at Currawong up for sale. (You can read it all here under the header The battle for Currawong has finally taken wing).
Now I've stayed at Currawong, and a lovely place it was, though the facilities had a certain working class quality to them, as you'd expect from comrades dedicated to fighting eastern suburbs excess.
But swayed by Piers I've come to understand that mamby pamby dedication to the environment is for sheep, at least when you could put a decent hotel on the site, and encourage more tourists to come and drop their dollars at the lush view of Pittwater, with Ku-rin-gai Chase National Park as your backdrop - or at least, a decent temple for mugs seeking enlightenment, or failing that 25 modern homes offering a grand view for rich folk seeking to escape the tar and cement.
But it seems I got it wrong.
After years of complacency, Sydneysiders are finally fighting for their beaches.
After a 12-year struggle, Northern Beaches residents have finally convinced NSW Planning Minister Kristina Keneally to refuse an application to subdivide the historic Currawong site within Ku-ring-gai Chase National Park, on Pittwater’s western foreshore.
Brave Sydney greenies, and Piers is fighting with you all the way.
Unless it just happens to be a chance for Piers to rake over the coals of the cynical NSW Labor party, and sundry villains like recently converted to right wing loonery Michael Costa wanting to sell off Currawong to the guru Marharishi Yogi.
Well of course in Sydney there's only one meaningful topic of conversation anywhere at any time of day - real estate - and if that fails as a conversation starter, you can always try chatting about ... real estate.
The moves on Currawong - and the fight to resist its development - are a classic example of Labor politics in NSW, and the desire on the part of right to act just like any business, as you'd expect, since to do anything else would get them an egging from the right wing commentariat.
So it's with a hearty, choking slice of heavily buttered hypocrisy that the fat owl manages to celebrate internal Labor party feuding, and activist despair and ultimately something of a greenie victory.
Local activists, including a formerly stalwart Labor supporter, the actor Shane Withington, were disgusted but they were to be snubbed again when the federal Minister for the Environment, Heritage and the Arts Peter Garrett reneged on a pledge to protect the site from development.
Keneally has found a face-saving means of extricating the Labor Party from this mess but the pusillanimous Independent Commission Against Corruption has yet to ask any hard questions about the smelly affair—least of all whether Unions NSW received any money for the site?
The fight to preserve Currawong is not yet over but the ministerial decision marks one small victory.
Ah now I get it. It's a smelly affair, the Labor party trying to act like Liberals with an eye for development. Yep, it's another chance at payback for Labor party apparatchiks seeking to sell off the family jewellery so they cold stay in power, and never no mind the pretty biscuit box landscapes.
Is this the way to save the rest of the world? Put it up for ownership by the NSW Labor party, then have them squabble over their desire to sell it, then have the right-wing commentariat join in and demand that the world be saved for environmental and greenie reasons?
Perhaps it is, but make sure you throw in some British Virgin island companies, so that there can be squawking about tax havens (as if minimizing tax was now somehow bad, you naughty Kerry Packer you), and include an exotic Indian religion to provide bum-bouncing jokes, and then allow a timely reference to The Castle, so suddenly you can suggest greenie activists and environmentalists are just common decent average folk (and let's not say anything about their tree hugging perversion).
Such fun, and such a good way to show how our favorite fat owl of the remove can spin on the spot when it suits him. One hundred and eight degrees, with flip? Easy, come unto me greenies and environmental activists and together with Piers Akerman, arm in arm, you can save Sydney and its beaches. And who knows, tomorrow you might even save the world.
Is it equally perverse of me to wish the place was concreted over and turned into a five star hotel, knowing that next week Akerman will be back railing about tree hugging and greenies. No, let's not reach for that level of perversion ... let's just hope Currawong keeps being saved, so that people (including working class people) can head out there and hug a tree or two.
Posted by dorothy parker at 8:25 AM