Piers Akerman, 666, the mark of the beast, the ABC, spin meistering and global warming 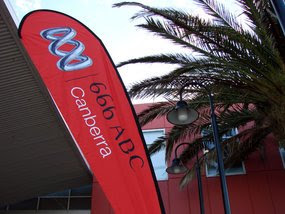 (Above: eek, beware satanists and megaphone spin meisters).
Waking up in a town where 666 is the call sign for ABC local radio is extremely disturbing.
For a start, it means that it's still on the AM band, when most rural radio has converted to FM. Guess that means Canberra, as the acme of country towns, remains further behind than most. And secondly I believe the numbers have something to do with satanism, and some rough beast slouching towards Bethlehem.
Did some wag in the early days have a satanist sense of humor? Way back when in 1953, the station was known as 2CN when it began broadcasting - even then it had 666 as its frequency - and despite a couple of frequency changes, it ended back up at 666 kHz, and now the wags in the office blithely talk of 666 embracing the digital age, and 666 ABC Canberra being the national capital's leading radio and online station.
You loons, you can't fool us. You're a flock of satanists, pure and simple. Heaven help the poor Christian who stumbles across your demonic call sign, and suddenly thinks the rapture is nigh.
Piers Akerman knows the truth about you. He knows you're just an outpost of spin meistering, unlike his own humble self, the essence of truth, justice and harmony, as he reveals yet again in ABC concocts global warming.
Yep, it seems that the ABC, the megaphone for every fashionable cause, is not giving up on its advocacy for global warming.
Damn you, satanists, damn you for reporting the views of scientists who disagree with Piers new pet Professor Ian Plimer. The villainess is Margot O'Neill on the ABC's program Lateline:
“ The claim that global temperatures have dropped since 1998, thus disproving a warming trend, is one of many rejected emphatically by one of the world’s climate scientists, David Karoly.”
Karoly, of the University of Melbourne, then tried to dump a bucket on Plimer saying: “Temperatures have dropped a very small amount since 1998, both in surface temperatures and in atmospheric temperatures measured from satellites. But that doesn’t mean that global warming has stopped. The temperatures, if we average from 1998 to 2008, they’re warmer than the previous 10 years, or the 10 years before that, or any 10-year period over at least the last 150 years.”
Now I'll leave you with the fat owl's counter explanation, which tells me just one thing: don't ask the fat owl to do your mathematics homework, don't ask him to explain graphs or means or statistics or data, and whatever you do, don't ask him to do your tax return.
But logic dictates that the drop in global temperatures is not a “claim”, as O’Neill said, it is a scientific fact. Dropping temperatures would indicate a cooling trend, not a warming trend, which O’Neill and the ABC are hoping for in order to push the Green policies of the ALP, and its political partner, the Australian Greens. Karoly’s remark has nothing to do with science, it is a personal political view, purely speculative and absolutely meaningless until temperatures start to rise again.
Well yes, but really fat owl your remark has nothing to do with science, it is a personal political view, purely speculative and absolutely meaningless until you show you understand how to decipher means, averages and trends.
Who knows, we might be in the grip of a cooling change, and we might be about to go into a new ice age. Or we might keep on average experiencing a trend upwards in temperatures. One thing's for sure, don't rely on the fat owl as a guide.
And the other thought is for Ian Plimer. Beware the company you keep. Thus far you mainly seem to have in the media the likes of Piers Akerman and Christopher Pearson and Andrew Bolt in your company, as ill-sorted and ill-tempered ratbags as you can find going around as commentariat columnists, and if you lie down with ratbags, you'll surely get up with fleas.
Or as Akerman himself noted, that's your ABC spinning as fast as it can, while failing to add, and here I am spinning as fast as I can.
And as for you satanists, never but never quote a scientist who disagrees with Ian Plimer, you megaphonies. We've got your number, in the capital of the nation, and it's 666, the mark of the beast. Quick, out with the holy water and splash it on the radio ...
Posted by dorothy parker at 11:30 AM