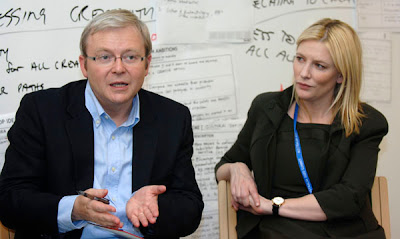 (Above: Ah Kev, you're such a thinker, and girls make passes at guys wearing glasses, if they're a thinker. Or if they know how to make open, engaging Italian-ate gestures with their hands).
Peter Costello has taken the opportunity to slag off the Ruddster's 2020 talk fest, curiously known as a summit, with Did the twee summiteers really map the future? (if you're an SMH reader), or the much more fitting, pompous and pretentious header Rudd's grand talk fest proves all process and no outcome, if you happen to be a reader of The Age.
Well, the summit, as we all know, was mainly a chance for Kev to perve on Cate Blanchett and feel up Hugh Jackman's super cut biceps. Along the way a lot of hot air was blathered, people were made to feel important for a minute, and then woke up the next day feeling used and abused (sob, I'm alarmingly close to one summiteer but no names no pack drill).
Anyhoo, Costello scores some easy points because no one at the summit picked the collapse of the neo-liberal experiment, just like John Howard and Peter Costello, who lost their crystal ball in one of those coal shipments to China. But never no mind, life was meant to be easy, and the sweet thing even admits he couldn't get to the end of the 400 pages of summary of well meaning summit blather.
Indeedy, point scoring about the summit is easier than shooting ducks in a barrel, or loons on a pond. But I couldn't let the opportunity of Costello's re-emergence into the sunlight yet again to remind us all of St Peter's message to the faithful this last Australia day, only a couple of months ago:
Good morning to everybody that is meeting together in the Melbourne Town Hall on this Australia day.  I can’t think of a more important thing to be doing than to Unite in Prayer on this, our National day for our nation.  And I bring you special greetings to each and every one of you that is there today and is praying for our nation standing in prayer on its behalf for it and for all of our people.

Many Australians don’t know that shortly after the 1st Australia day January the 26th, the first sermon was ever preached on Australian soil by the chaplain that came out with the first fleet. The chaplain took as his text a verse from the Psalms, and he preached a sermon on these words.  “What shall I render to the lord for all his benefits to me?”  Course the benefits that he was preaching about was the coming of the First fleet to Australia, the landing and the establishment of the new country.

As we look back over hundreds of years of Australian history, we can still see the benefits of God to us in this country. A wonderful country, wonderful people that’s given a home to those that have come from all over the world, a country that has had a peaceful history and a prosperous history, a country that is now respected around the world.  Of course the following verse of that psalm goes on to say, “what shall I render to the Lord for all of his benefits to me” goes on to say “I will take the cup of salvation and call upon the name of the Lord.”  And of course, what greater gift is there than the gift that God has given us in Jesus Christ. The cup of salvation, and what more can we do than to take hold of it and call upon the name of the Lord, which is what you are doing today in the Melbourne Town Hall.

One of the things that has been absolutely central to the development of Australia and the foundation of our society is that Biblical heritage, the heritage that we have through the Scriptures, and through the Ten Commandments, respect for our Maker, respect for our fellow citizens, respect for property, respect for the laws that God has laid down.  That’s been the foundation of our society. It’s been the basis of our peaceful tolerance of each other and of order. It has been the basis of creating opportunity for so many Australian’s. If we forget that tradition, if we walk away from those God given commandments, then we as a society will be threatened with the breakdown of that order, will be threatened with losing our heritage and loosing opportunity.  So I want to say to you, those that are praying for Australia today, to pray that this nation will always remember its foundations, and always be true to them, and always live according to those laws.   There are many people today that are telling us that religion is all a lot of superstition, that the laws that have been laid down, of respect for individuals, property and for our creator are all a load of nonsense, that don’t respect life.  If we fall for that trap, if Australia falls for that trap then the very basis of our society and its order will be threatened. That’s why we need Christian people to pray for our country, we will never understand the way in which God moves.  But we know that if his people pray, He will hear that they will be a light to the nation and the nation will be covered and protected by Godly people who are giving direction and standing for it in prayer. And I thank you for what you are doing today and can I encourage you to continue in it.
May God bless you and may God bless our country in this year 2009.
I guess we all didn't pray hard enough for the neo-liberal experiment to succeed, or could it be that God is actually a socialist (given certain tendencies of his son to blather on about the poor, and the outcast, and the maimed and the helpless).
Talk about unctuous, sanctimonious blather. All of a sudden, the summiteers sound like a sensible bunch of do gooders wanting things to get better in the future, but not really knowing how, especially when edited and audited down by the Rudd-appointed session minders who made sure nothing remotely controversial, or interesting, made it through to the final report (including, it should be said, Cate Blanchett, who along with the spineless Peter Garrett made sure that any suggested steps towards a creative Australia first involved speaking as toothless tigers).
Of course the Catch the Fire ministries took the gloss off St Peter's benediction by promptly blaming the Victorian bushfires on Victoria's abortion law reforms.
Costello is a serial offender in this kind of fundie loving theological prayer fest - his visit to Hillsong was just one example of his dog whistling to Christians with liberal joy in their hearts.
But would you call this man a futurist, or at least someone with a vision of the future, except for the right of  a select few - well St Peter in particular - to be handed things on a platter without stirring a finger - like the leadership of the Liberal party and in due, seemly, god given course, the leadership of the country?
If he ever gets the gig, we will really need the Christians to pray for the country. Come to think of it, I might change a lifetime habit, and do a bit of praying myself. Pray dear lord he remains content taking cheap easy shots at the Ruddster from his convenient perch on the back bench.
If all he can do is hark back to the summit - the prognostications of which were unreadable at the time - then he's clearly got too much time on his hands. Beware poor Malcolm in the middle, while Peter fiddles, he's clearly hoping your place in the popularity polls continues to burn ...
(Below: Peter Costello in the grip of a powerful smirk, or maybe the spirit of the Holy Ghost).

Posted by dorothy parker at 9:37 AM