While settling in for a relaxing Easter, it's worth reflecting sadly on how little value - how little joooce - there is in Australian loonery, when juxtaposed with the finest loonery on offer in the United States of America.
I guess in a nation of three hundred million or so, the cream of loonery will always be creamier than the best a nation of twenty odd million can whip up. And as a result the comedians who trawl through the ranks of loonery for inspiration are way better than the local mob, who seem to think satire is some kind of cloven-hoofed satyr.
Perhaps that's why comedian Jon Stewart is currently the best columnist going around, and why a trip to Comedy Central online is now an obligatory stopover point for anyone wanting to see loons cop a bucketing (though this clip comes courtesy of the equally excellent Crooks and Liars site). Some might call it unseemly gloating, but Stewart is actually a jolly, forgiving type:
See now you're in the minority. It's supposed to taste like a shit taco. And by the way, if I remember correctly when a disagreement was expressed about that President's actions when ya'll were in power I believe the response was "Why do you hate America?". "Watch what you say." "Love it or leave it." "Suck on my truck nuts."
Potato day as the end of life on earth as we know it? Only in America. (And I say that as an Irish gene Australian genetically programmed to devour potatoes, some kind of Jungian folk memory from the time my great grandparents fled Ireland because they couldn't get spuds but hoped to get gold).
But perhaps the funniest thing in recent days has been mild mannered film critic Roger Ebert taking a pot shot at Bill Orally, in Thoughts on Bill O'Reilly and Squeaky the Chicago Mouse.
Oh the indignity, that a film critic would feel cheeky enough to have a go at Bill, and in a none too subtle way, after Bill decided to include the Chicago Sun-Times in his hall of shame:
Yes, the Sun-Times is liberal, having recently endorsed our first Democrat for President since LBJ. We were founded by Marshall Field one week before Pearl Harbor to provide a liberal voice in Chicago to counter the Tribune, which opposed an American war against Hitler. I'm sure you would have sided with the Trib at the time.

Ouch. And perhaps it doesn't even break Godwin's Law, since it only implies Bill would have sided with the Trib which sided with Hitler. Not so much a Nazi lover as a lover of Nazi lovers.
It seems the Sun-Times dropped Brillo's musings, which Ebert describes as knee-jerk frothings and ravings, the outpourings of a mad dog. Go on Roger, tell us what you really think.

Bill, I am concerned that you have been losing touch with reality recently. Did you really say you are more powerful than any politician?

That reminds me of the famous story about Squeaky the Chicago Mouse. It seems that Squeaky was floating on his back along the Chicago River one day. Approaching the Michigan Avenue lift bridge, he called out: Raise the bridge! I have an erection!
Now if only Ebert would do that to half the movies he sees and sucks up to in an ever so nice and mild-mannered way. But at least I now know the real meaning of two thumbs up, and I guess Bill O'Reilly does too. Where the sun don't shine.
Gee I sometimes I get resentful of Americans. They don't know how lucky they are, living in loon heaven. Or maybe they do.
And since we mentioned satyrs for no particular reason, why not end with a nice picture of an Attic satyr balancing a wine cup on his penis way back in 500-490 BC, proving that there's very little difference between the ancient Greeks and a quiet Easter day in Australia 2009 AD. 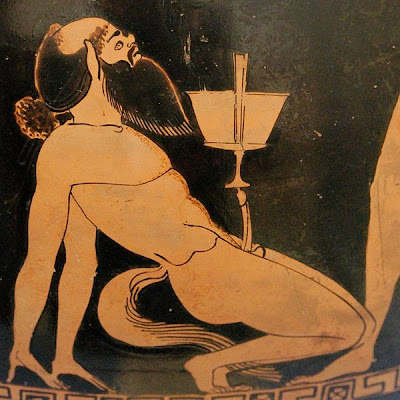