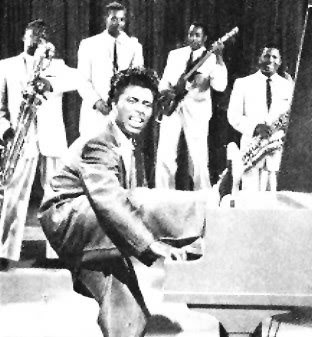 (Above: oh yes dude, lay your leg over my piano, and give me some of that rock 'n roll music, any old way you choose it, it's got a back beat you can't lost it, any old time you use it, it's gotta be rock and roll music if you wanna dance with me).
Followers of Ian Plimer will be wildly excited that today Christopher Pearson has (presumably - we didn't catch an invite) carried out his duties and acted as master of ceremonies at the Adelaide launch of Plimer's book Heaven and Earth: Global Warming - The Missing Science.
The book's sure to be a cause celebre, according to Pearson in his column Sceptic spells doom for alarmists.
With an honors degree in the arts from Flinders University, and a dip. ed. from Adelaide University, Pearson is surely exactly the right person with the right scientific credentials to carry out the book launching duties, and with all the requisite skills that Plimer insist are necessary to understand the abstruse complexities of global warming, including but not necessarily limited to all kinds of arcane expertise:
An understanding of climate requires an amalgamation of astronomy, solar physics, geology, geochronology, geochemistry, sedimentology, tectonics, palaeontology, palaeoecology, glaciology, climatology, meteorology, oceanography, ecology, archaeology and history.
Not that this stops Pearson from chipping in with some first rate science in his column, as much as you might expect of a man who's heart is somewhere near the medieval church and a jolly sharp scapula applied to the thigh.
But according to some diabolical Daves, this is playing the man, not the ball. Well as Pearson is a loonish fundamentalist Catholic, who better to understand the fundamentals of fundamentalism than Pearson?
So instead of playing the man, let's play the ball. Let's label anyone who disagrees with us anti-human totalitarians. Now there's a solid scientific argument:
The environmental religion embraces anti-human totalitarianism. Some environmentalists consider their ideas and arguments to be an indisputable truth and use sophisticated methods of media manipulation and public relations campaigns to exert pressure on policymakers to achieve their goals. Their argument is based on the spreading of fear and panic to declare the future of the world to be under serious threat.
In such an atmosphere they continue pushing policymakers to adopt illiberal measures, impose arbitrary limits, regulations, prohibitions and restrictions on everyday human activities and make people subject to omnipotent bureaucratic decision-making.
Doesn't quite work for you in terms of science? Well you have to admit it's nicely rounded abuse. How about calling anyone who disagrees with you an environmental romantic, prone to pagan superstitions, modern world haters who misuse and abuse the energy-intensive communication systems of the modern world?
The environmental romantics have a loathing and fear of population increase, seek to return to the past and promote pagan superstitions. Well before the crunch of global warming appeared, the environmental romantics hated the modern world despite the fact that in industrial societies we live longer, we are healthier, the air and water are getting cleaner, the area of forests is expanding and we have far greater freedom than in past times. It is the energy-intensive communication systems of the modern world that allow the environmental romantics to spread the word.
Ah the intertubes. Is there nothing they can't do? Is there nothing they're not responsible for? Peddling witchcraft and lies. Damn you Al Gore and your dangerous energy-intensive invention, and your aircraft junketing ways and your electricity usage in your mansion.
There, that's perfect. Not a hint of personal abuse, just a lay down misere scientific argument. You stupid eco-fundamentalist, atavistic nullities. And the area of forests is expanding. Thank the lord for the humble, environmentally friendly pine plantation. Pity about the Amazon. Meh, plenty more jungles where that one came from.
But wait there's even more science to hand. How did all this nonsense gain so much traction? How did such a solid seeming expert consensus so quickly develop on such an absurd hypothesis? Let Christopher explain courtesy of Plimer:
Part of the answer lies in the pseudo-scientific pronouncements coming out of the IPCC, long captured by a small group of eco-fundamentalists, and particularly by its summaries for policymakers. The Nobel committee that rewarded IPCC panellists and Al Gore also has a lot to answer for.

The rest he explains by reference to Trofim Lysenko, an insignificant agricultural scientist but adept propagandist who, despite the complete lack of evidence, managed to persuade Joseph Stalin and his henchmen that he could triple or quadruple Soviet grain production. Plimer reminds us that "opposition to Lysenko was not tolerated. Mendelian geneticists were demonised as 'fly lovers and people haters' and between 1934 and 1940 numerous geneticists were shot or exiled to Siberia. Genetics research stopped. In 1948 genetics was officially labelled as 'bourgeois pseudo-science'. The ban was lifted in 1965 but the USSR had lost 30 years of advance inagriculture."

Plimer doesn't pretend that the international scientific community today lives in terror comparable to the gulag, but he has some telling things to say about the politicisation and bureaucratisation of science.
People haters? Is that the same mob who fear and hate population increase?
WTF? What on earth does the history of Lysenko under Joseph Stalin have to do with the science of global warming? Why not mention the science propagated by Josef Mengele, Dr. Eduard Wirths and Dr. Aribert Heim in the concentration camps of Nazi Germany as the conclusive topper to that line of reasoning?
Plimer doesn't pretend that the international scientific community today lives in terror comparable to the gulag ...
Then why menton Lysenko, why trade off on it, why use random methods of guilt by association? That's not logic, it's not science, it's just a cheap smear.
And it's a cheap way to assail the so-called climate scientists, with their so-called research grants and vested interests in defending mainstream climatology and rent-seekers in the academy, government departments and in commerce who expect to make a living out of regulating carbon emissions.
Well it's a fine and interesting pairing, this particular odd couple - a fundie loon Catholic, who supports the Pope in every little fundie step he makes, and thinks the mad SPPX fundie loonacy makes for interesting diversity in the church - and now he's doing the scientific quick step with a scientist adept at berating his opponents for being rabid, faith-based loons.
But this is the bit I most particularly loved:
In science, we are in awe of nature. In religion, we are in awe of God. Yet the new environmental religion is in awe of nothing. It is spiritually vacuous and negative. Christianity has a long tradition of using music for worship. The music, especially from the time of Bach and onwards, underpins all Western music. The environmental religion has no music, no traditions, no scholarship, no nothing. The new environmental religion has no big questions. It has no unknowns.
If that's a science-based argument, then Bart Simpson can eat my knickers. But I will say one thing. I'm in awe of the stupidity of anyone who thinks this has anything to do with anything. In fact I find it hard to believe it's an actual Plimer argument, but there you go, the noble Pearson had it in inverted commas as a genuine quote.
Let me make a counter-argument. Secularism has a long tradition of using music for sexual congress, dancing and pleasure. The music, especially from the time of the Beatles, the Who, and the Rolling Stones (not to mention Chuck Berry and Howling Wolf) underpins all revolutionary activities, such as shopping, driving automobiles on Route 66, surfing, pashing, necking, and fornicating in breach of Catholic sanctions.
Those who worship old music have in fact no understanding of real modern music, its traditions and its scholarship. They live in the past, whereas modern music lives in the present and the future. The religion followed by classical music devotees understands nothing of this new world. They don't understand the new big questions. They can't offer anything in terms of understanding. They don't even know they don't know they have no unknowns, or even no known unknowns. Otherwise they could explain what exactly this lyric means:
doo wa diddy diddy dum diddy do

Tutti Frutti, all over rootie
Awop-bop-a-loo-mop alop bam boom
Until they have an answer to these key questions, they have nothing to offer. Nada, zip, nullity, void, cancelled.
By the way, did I mention the music Shostakovich managed under the reign of Stalin? No, never mind, it was probably labelled muddle rather than music at the time, and the west consequently lost thirty years in terms of advanced composing. What's that got to do with anything and in particular global warming? Well nothing really but I like Shostakovich's music. So it goes.
And just when will Christopher Pearson explain to the world how excommunicating doctors accused of aborting a nine year old carrying twins, the result of alleged ongoing rape by her stepfather from years six to nine, reveals a Catholic church in touch with the times, or humanity at large?
Yep, better to die for the sake of old men in the grip of mad zealotry in Brazil than get medical help that likely saved the girl's life - and better yet send the doctors to hell. Guess it's the right stuff - for men at least - for women to endure a romantically painful end in childbirth after years of rape, and get some of that pie in the sky in the sweet by and by.
And they have the cheek to call others environmental romantics, fundamentalists, and rabid believers.
Lordy, what a funny old world it is.
Posted by dorothy parker at 12:11 PM