(Above: as philosophical principles that forbid commitments beyond the evidence are themselves philosophically tendentious, sit back and marvel at Christians fearing the gathering storm, the dark clouds of gay marriage, having their freedom taken away, helplessly watching as their children are brainwashed, and then most cheeky of all, forming a rainbow coalition to save the world for heterosexual marriage. Sorry homo dudes, that rainbow flag is now officially pwned. Time to bring back Roman law and the Greek lifestyle?)
It's always strange to read someone musing on the Christ story,  and experience it as a kind of tinnitus, a low, constant white high pitched noise in the hearing system, audibly present but making no sense whatsoever, and so it is with Brian Scarlett's To deny faith is to deny the principles by which we live.
Even the header, presumably supplied by a subbie, is meaningless, since - as the rest of the article takes a Christian tack - it seems to imply that to deny the Christian faith is to deny the principles by which we live. This might be well and good for the 35% or so of people on the planet who profess to be Christian, but it's meaningless, and even offensive to the other 65%, who might deny that particular faith, might have no faith at all, or might have a different set of principles by which to live.
But then the Christian church (in its 35,000 plus varieties of baked beans) has always been a colonizing faith with a fierce intolerance for the views of those outside it. That's why when there's talk of the principles by which we live, few like to acknowledge that it's Roman law that set up a lot of the principles by which we live, unless of course you happen to live in China, where the legal system was based on Confucian philosophy.
So that leaves metaphysical principles, and Brian Scarlett delivers in spades, with mystical musings about death and resurrection, though in a more abstruse, academically inflected form of mumbo jumbo.
It turns out - after we start with a bow to the 14th century, the black death, and the English mystic Julian of Norwich saying all will be well, thanks to the Easter story - that the resurrection of Jesus is the peak event in the story of humanity, and  in that peak event is also the peak event in the human history of Jesus.
Somehow the Resurrection redeems everything that needs redemption. (including death)
Very handy word that 'somehow'. But there you go, a single event a couple of thousand years ago represents the peak for humanity, and it's been downhill ever since.
Best then not to dwell in the present when contemplating this 'somehow', best to float back to the form Jesus took after the resurrection, which requires faith to be recognized, or take a swipe at the Gospel of Thomas for suggesting Christ played a double hand by claiming to be both man and god. When you think about it, an all-knowing god who can see the past, the present and the future, surely has some kind of inkling that he's going to survive a crucifixion, which might do a little damage to that part of the body made manifest, without doing much damage to the key bits of the heavenly shape, like the carbie and the pistons.
Scarlett runs the line that we can have it all, a love of the body, and regret for those that have passed on, knowing that death is  pretty hard, but believing in the resurrection of the body, though it might take on a new shape that requires faith to be able to recognize it.
Again best not to get too close to modern images of death - people falling out of the skies in poorly maintained planes for example, random, inchoate, cruel deaths - but plunge into the safety of medieval times when life was short and real death was pretty real:
Real death, and consequently genuine triumph over death, is captured dramatically in medieval depictions of the general resurrection. People clamber out of graves, or emerge from the jaws of lions. They were dead all right, and sometimes they died horribly, but they are now alive. The idea that we are essentially souls does not capture this vivid insight, and this has been recognised in the Christian Creeds. They are compatible with the idea that we have souls, but it is the resurrection of the body that they insist on.

Well let's not worry abut where this resurrection of the body will take place, or where the resurrected bodies will reside, or what exactly is the point of hanging around in a resurrected body for all eternity playing some kind of scrabble to sooth the still active mind.
For that, you just have to have faith. A vivid insight.
So it is a very strong idea that the Gospels invite us to commit to. Weak and tentative commitments to it are possible; stronger commitments face obstacles in our culture. One of them is the idea that faith is irrational because it goes beyond the evidence. But a moment's reflection shows that we live by doing just that.

We do so in our relations with other people, in our judgements about happenings around us, in following whatever plans we have for our lives, in sticking to scientific or historical theories that we know are provisional. With imperfect information we act with certainty.

We ought to be clear-sighted enough to recognise that the philosophical principles that forbid commitments beyond the evidence are themselves philosophically tendentious.

And what if we apply those principles to themselves?
Well that takes care of those irrational fools who believe in rationality, and scientists who believe in philosophically tendentious ideas, like the notion that apartment blocks called A-380s were ever meant to fly in the first place. What fools scientists be, with their Darwinian theories, and descent from monkeys, and talk of millions of years of geology, and polite mutterings about Adam and Eve being an amusing story.
Yes, according to Scarlett, with provisional theories and imperfect information, we certainly act with certainty all the time. Or do we? I've never known that many people who act with certainty, and a lot of us, recognizing that we have imperfect information and understanding, tend to be a tentative, fearful bunch. Like Christians contemplating gay marriage.
I have observed however that those who make commitments beyond the evidence tend to be the bunch who believe we all got cranked up just six thousand or so years ago, that the old testament is literally true, that gays and gay marriage are somehow intrinsically weird as opposed to god's creation, that witch burning is okay once you understand that you can go beyond the evidence that witchcraft is a harmless notion like astrology, that eating bread and drinking wine can be a kind of cannibalism, and so on and on, into every every form of superstition and societal hysteria ...
I wonder what did happen to the two thousand Jews slaughtered by Christians in 1349, or the poor buggers wiped out by Christians that year in Mainz or Cologne, during the Black Death time, or the more than 350 separate massacres of Jews that took place in 1351.
Oh never mind, they were acting on imperfect information, but with a proper Christian certainty about the role of Jews in everything.
But what if we apply those principles to themselves? What if we offer up obscurantist humbug as a pious form of mysticism that allows Christians a 'get out of jail free' debating card, while claiming it's clear sighted to debunk science on the basis of philosophical principles that forbid commitments beyond the evidence because they are philosophically tendentious. And the extraordinary metaphysical gyrations of Christians thereby become clear sighted and not philosophically tendentious.
Brian Scarlett is a senior fellow in the school of philosophy, anthropology and social inquiry at the University of Melbourne. Where are all our right wing commentariet now, to worry about the students attending tertiary institutions in this country?
(Below: Christians building up a persecution complex about Romans. There is only historically tendentious evidence that Christians were thrown to the lions in the Roman Coliseum, but never let historical principles get in the way of certainty and a good story). 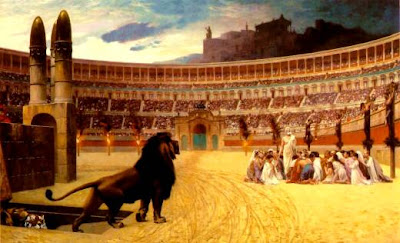 Posted by dorothy parker at 6:30 AM