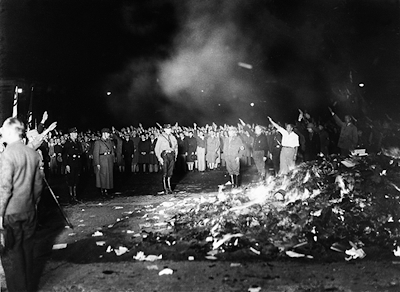 (Above: don't y'all just yearn for the good old days of a fine book burning?)
The constitution of the United States of America supports your right to be a loon in your own way, without let and hindrance from others, provided your loonacy doesn't actually do physical harm to others.
Now we might argue about the question of mental harm.
The scene: an ordinary Project 912 Glenn Beck Tea Party, somewhere in a humble tavern in America, filmed so roughly, it's probably better just to give you the YouTube URL here.
And then offer up a transcript of some of the deeper thoughts that went down:
Marketing Man: Gentleman over here was talking about how this happened over night. This didn't happen overnight, this didn't happen overnight. In the early fifties our country was infiltrated by the Communist party, they infiltrated our school system, our higher education system, our government and our businesses. This is a fifty year plan, it's come to culmination right now. This is not something that's just happened because of Obama. Alright now, George Soros is the man, the money man behind Barack Obama. Now I said, I know it, okay, I'm in the marketing business, George Soros is the man, he put this plan together. Obama's a puppet of this guy ... Okay, the American people have been duped, our our our media, our media will not tell the truth. They're not doing it. The Fox network is the only one that will. Now I can't even get Fox to come down here in a Fox meeting ... I can't even have ... they won't even bring a reporter down here ... so that shows you where the media's at ... they're not on our side ...
Marketing got us into this mess and marketing will get us out of this mess. Now this fellow over here talks about the Constitution Party ... no marketing. No marketing! Or the Libertarian guy, he's talking about his party. No marketing! Marketing got us in this mess. Obama's marketing is loco, they're using brain wash techniques. They're doing everything they can to brain wash our public right now. This thing they're putting on our TVs, it's a brainwash unit, seventeen million people are going to be brain washed with this thing when you hook it up to your TV in June. Why do you think Obama waited until June, he wanted to wait until June till he put this thing in here, it's a brain wash device. They were using it in the federal government for at least the sixties. Now they're using it against us. If we don't get serious about this, we're gonna perish. Try to get serious. This is not the time ... we don't have any time ...
This guy .. now, the only thing is going to frighten, this guy on the wall for us, is the unemployment rate is skyrocketing  ... when people don't have food on the table, he's gonna start to try do it with the federal government, and it ain't gonna work. It ain't gonna work, he's going to have to take our money. I'm not paying taxes anymore ... I'm not doing it, you want to fight him, I'm not paying taxes anymore. I quit. I told my accountant this morning, I quit.
... I tell you another thing, you got kids in school, you got them in college, get them the hell out of college, they're brainwashing them.
Woman: Burn the books!
Woman 2: ... give them a sound foundation before they go ...
Marketing Man: If you send them off to college, these professors brainwash these kids ...
Man: I don't think you were serious about that were you? (burning the books)
Woman: I am too.
Man: Burn all the books?
Woman: The ones in college, the brainwashing books.
Man (with a laugh): The brainwashing books?
Woman: Yes.
Man: Which ones are those?
Woman: Like the evolution crap (Man: right)  yeah
Man: I'm with you on that one ...
Woman: ... alright, rock on.
Marketing man: ... understand we got an enemy here, this is a battle for our survival. It's not just an election.
What I can't work out is how Piers Akerman manages to write for the Daily Terror in Australia, and at the same time roam America, stirring up righteous anger and indignation about the communists and brain washing devices and college professors and the need for a righteous cleansing every so often (and if that has to include burning them durn pesky Darwinian books, so be it).
It's just a pity that these decent American folk don't seem to have woken up to the dangers of fluoridation, and if they only knew the truth, they wouldn't be blaming George Soros, they'd be blaming Kevin Rudd, who's responsible for everything wrong with the world.
Ah the loons, the loons. It's never a quiet day on loon pond, they're everywhere, and in everything. As Peter Costello once sagely noted, the lord surely moves in mighty mysterious ways ...
(Below: helpful Nazis cleanse the world of Virginia Woolf novels, which at last we've realized, thanks to Phillip Jensen, have, along with the Bloomsbury group, directly led to the decline and fall of the western world as we know it). 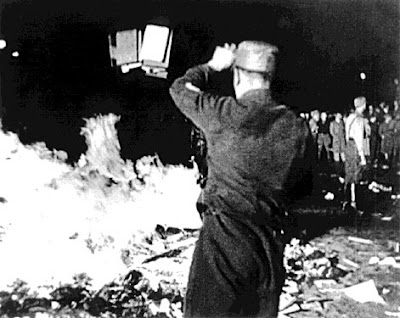 Posted by dorothy parker at 9:59 AM