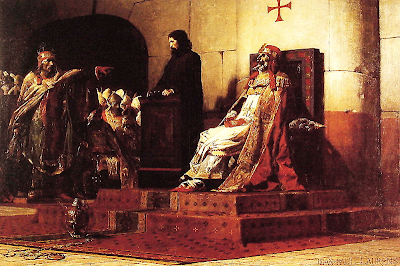 (Above: Jean-Paul Laurens 1870 painting of Pope Formosus and Stephen VI in the Cadaver Synod in 897).
Papal history is one of those wonderful pastimes you can indulge in when you don't have a condom to hand, or like Cardinal Pell, you think condoms are evil, and you'd prefer to study the bedrock on which infallibility is founded, and see how wonderful traditions have been handed down directly in an unbroken line of faith from St Peter to the latest Holy Father.
It's always hard to pick a favorite. Should we go for Pope Stephen VI (896-897) who bizarrely had his predecessor exhumed, tried, de-fingered, and re-buried briefly, before throwing the body in the Tiber. Or what about Pope John XII (937-964), who was killed by an enraged husband who caught him in bed with his wife (but not before John had killed a couple of people himself).
You have to give Pope Urban VI (1378-1389) a guernsey for saying he didn't hear enough screaming when conspiratorial Cardinals were tortured, while the Borgias and the Medici almost form a super league of naughtiness.
As usual, if you're interested in papal hi jinks and perversions, Wikipedia can be your friend, and you might like to start with its list of sexually active popes, and Legends surrounding the papacy, which disposes of Pope Joan and the testicle test for becoming a pope while leaving open the question as to whether the current pope is the penultimate one.
I'm reminded of all this, because come Easter, our favorite Catholic loon columnist, Christopher Pearson, has chosen not to dwell on the lack of virtue in condoms, or even to tackle the more weighty issue of why there are good solid reasons for excommunicating doctors who performed an abortion on a nine year old girl carrying twins, allegedly the result of three years of rape by her step-father.
Instead Pearson goes for a romp through the medieval and Renaissance popes, celebrating them for their raging appetites and ability to keep a princely table, in a column headed Holy tortellini and other papal repasts. He's particularly keen on Leo X and his love of luxury and entertainment, and regales us with stores of sugard capons baked in a casing of gold leaf, and chicken with truffles and ham.
He also has a lot of time for a recipe popular during Alexander VI's pontificate, involving a simple blackberry sauce for grilled quail. Alexander was of course well known for designing a classy torture chamber, for fathering sundry illegitimate children, and for poisons as a preferred form of assassination. He also liked to serve pheasant in dishes made from human skulls.
But Pearson isn't a one pervert Pope player. He also gets excited about a recipe from Paul III (another stud and fine political performer), for tortellini stuffed with chicken meat, a fine accompaniment to fornication, nepotism, licentious plays, extravagant feasts and notable delicacies.
And there's also a lot of fun to be had with Martin VI who had such a passion for eels in white wine that he ate himself to death pigging out on his favorite dish.
Pearson gets all his stories from Buon Appetito, Your Holiness: The Secrets of the Papal Table, by Mariangela Rinaldi and Mariangela Vicini, published by Pan, essential reading for Catholics looking for guidance in staging an Easter feast in the spirit of the medieval church.
Well in response to this you might go all Christian and Calvinist and start muttering thoughts like:
And again I say unto you, it is easier for a camel to go through the eye of a needle, than for a rich man to enter into the kingdom of God.
Or a cavalier Cardinal. But then the Catholic Church is such a good business, it can afford over two billion dollars in payouts in the United States for fiddling with kids, with the Los Angeles payout alone costing $660 million (even though insurance picked up some of the tab, that's still a goodly amount of child molestation).
Though nobody knows exactly what the Church is worth (how to value the treasures in the Vatican, or the church real estate in Rome alone) it's been estimated that in the year 2000, the 20,000 parishes in the United States generated some $7.5 billion in revenue. Some camel.
So here's a thought for Easter Sunday. I reckon that y'all should, Bettina Arndt style, break out a condom or two, and have a hearty fuck. After all, if fine food, murder and mayhem are good enough for the odd Pope or three, where's the harm in a little celebratory sex. That way, you don't have to displace all your sexual energy into eating abundant quantities of food, or worst fate of all, turn yourself into an Adelaide foodie.
And the next time you hear Cardinal Pell tell the world how dangerous condoms are for Africans, block your ears and just focus on that quail and blackberry sauce dish. And enjoy your sesso sicuro. 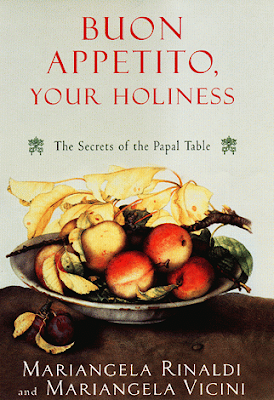 Posted by dorothy parker at 8:25 AM