Malcolm Farr, Easter, Christians' primacy and dominance in peril, and the thankless years 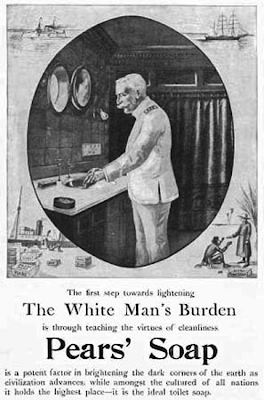 (Above: worried about the Christian hegemony, anxious about the white man's burden, upset that Easter might no longer be considered a holiday? Try a little Pears' soap, as featured in McClure's Magazine, October 1899).
You have to wonder what kind of bread Malcolm Farr was eating. and what high alcohol kind of altar wine he  was drinking over the easter break, but there's more than a hint of it in Keeping the faith in a changing world.
The diplomatic agenda this weekend was a vivid reminder that Australia is a largely-Christian enclave in a hemisphere dominated by a brace of other faiths.
Whatever qualms the ASEAN organisers had about plonking a major international event into the middle of a hugely important Christian festival obviously didn’t last long.
Lordy lordy here we are in a small enclave, surrounded by the heathens, with their jibbering and their jabbering in foreign tongues. Gets so we can't even travel without fearing for our lives, or at least getting worried about whether we can find the easter eggs in the backyard.
Hugely important Christian festival? Where religious loons talk about the uselessness of condoms and the way the world has been brought to its knees by Virginia Woolf and the Bloomsbury group?
Never mind, Malcolm finds time for a little Islamic bashing:
It would be interesting were a summit to be called during Laylat al-Qadr, the part of the Moslem Ramadam marking the delivery of the Koran to the prophet.

Indonesia, for example, might object. But times have changed since the Christian calendar dictated major events. That priority is disappearing as steadily as the erosion of the Christian West’s dominance of the global economy.
Actually Malcolm, and this might come as a news shock, frightening in its intensity, the majority of people in Australia don't seem to give a toss about church going or Christianity, with people haring off for the long long weekend, or heading off to the races, or to the football, or organizing barbecues. Having a bloody good time, and treating it like - gasp - a secular holiday, away from the rigors of working for the man.
But okay, let's see how much further you can crank up the Christians in peril imagery:
Christmas Day continues to be a no-go date for summits, but we must accept that for billions of people in increasingly powerful nations that holy day is just another working day.

US President Barack Obama last week visited Turkey, a nation which is officially secular but in practice is Moslem. It was seen as Obama’s first bid to speak directly to the Islamic world.

More and more we will be seeing attempts at political and diplomatic bridges with nations predominantly Islamic in culture. This will test the tolerance of voters - here and in the US - and might be considered to be a downgrading of our Christian primacy.
The Christian primacy? Well guess I won't be wishing you happy holidays, because that means I want the anti-Santa brigade to win. Oh darn, there go those spoilsport Christians again, saying that Santa distracts from the religious origins and purposes of Christmas. Maybe that's why the Chinese have taken to the notion of Santa with such enthusiasm?
Here's the rub Malcolm, it's your free market Friedman-ites who called the end of Christmas, with their abolition of penalty rates, and their free labor market talk. Christmas turned into just another holiday for some, because plenty of others were shown the virtue of working, or getting the chop.
As for the Christian primacy and Christian dominance, I haven't heard that kind of claptrap since Rudyard Kipling went out of fashion in schools and churches. The sooner this kind of colonial nonsense is put down, the sooner we can tackle the kind of Islamic fundie nonsense currently festooning Pakistan with despair.
Now if you'd said the timing was unfortunate because the Ruddster might have missed a chance to be Australian, with a beer and a sanger, instead of demanding meatless sandwiches, you might have had a point. But missing a hugely important Christian festival, as opposed to munching down on 70% chocolate, preferably with orange flavoring? You've got to have experienced some kind of personal revelation this Easter right, to get you into this kind of clash of civilizations and culture mode? Did the preacher really hammer home the sanctity of Easter? Did he warn you off chocolate?
For penance, we suggest a year's reading at The Christopher Hitchens Web - and remember in case you are suddenly afraid, none are more fiercely anti-Islamic than Hitchens.
I'm not sure he or you will help organisers work out a good time for politicians to sit down and have a conference, especially if the local Buddhists decide to bung on a do, but it might help you appreciate that apocalyptic talk of Christian primacy is no longer the go, along with the pious hope that Islamic fundie apocalyptic nonsense will also bite the dust - especially as that kind of nonsense has little to do with the rising forces in the region, the billions in India and China, which has bugger all to do with the small cheese known as ASEAN.
Oh and at the same time, perhaps a five thousand word essay on the continuing relevance of the following poem:
The White Man's Burden
by Rudyard Kipling

Take up the White man's burden --
Send forth the best ye breed --
Go bind your sons to exile
To serve your captives' need;
To wait in heavy harness
On fluttered folk and wild --
Your new-caught, sullen peoples,
Half devil and half child.

Take up the White Man's burden --
In patience to abide,
To veil the threat of terror
And check the show of pride;
By open speech and simple,
An hundred times mad plain.
To seek another's profit,
And work another's gain.

Take up the White Man's burden --
The savage wars of peace --
Fill full the mouth of Famine
And bid the sickness cease;
And when your goal is nearest
The end for others sought,
Watch Sloth and heathen Folly
Bring all your hope to nought.

Take up the White man's burden --
And reap his old reward:
The blame of those ye better,
The hate of those ye guard --
The cry of hosts ye humour
(Ah, slowly!) toward the light: --
"Why brought ye us from bondage,
"Our loved Egyptian night?"

Take up the White Man's burden --
Ye dare not stoop to less --
Nor call too loud on freedom
To cloak your weariness;
By all ye cry or whisper,
By all ye leave or do,
The silent, sullen peoples
Shall weigh your Gods and you.

Take up the White Man's burden --
Have done with childish days --
The lightly proffered laurel,
The easy, ungrudged praise.
Comes now, to search your manhood
Through all the thankless years,
Cold-edged with dear-bought wisdom,
The judgment of your peers!
Posted by dorothy parker at 9:30 AM