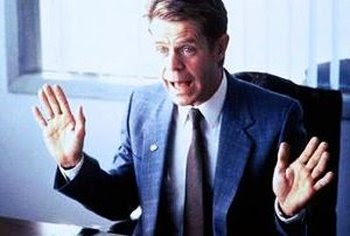 (Above: broadband with TruCoat).
Only a childish lawyer with a childish fixation on the law would think you could score a point against a politician by chiding them for breaking corporate law by pitching wild ideas to the public.
Cue Janet Albrechtsen in Rudd flouts rules with market play:
A disappointing thing happened last week. A couple of unlicensed share spruikers went on television imploring Australian mums and dads to invest in a company yet to be formed, with no business case, no feasibility study and whose viability is extremely doubtful.

The same guys paid no attention to the financial needs or risk profiles of their audience but simply asserted this was an investment not to be missed. They probably broke three or four critical sections of the Corporations Act, some of them carrying jail terms. Just the sort of corporate cowboys that our Prime Minister has condemned in his moral sermons about corporate excess.

The names of these chaps? Kevin Rudd, Wayne Swan and Lindsay Tanner, all talking about the company that will run their national broadband project.

Lucky for them they can probably hide behind Crown immunity and other technical defences to justify ignoring the corporate standards set down in our laws.
Well on that score there wouldn't be a politician in the game who's not as guilty as hell, not least John Howard for selling off those Telstra shares to an unsuspecting public, the poor mugs not realizing they were being sold a flea bitten pup, run by monopoly-minded loons without a clue about operating a business in real world conditions.
We occasionally look at our Telstra shares and wonder how we could have been so easily duped. Unfortunately they don't bother with printed shares these days, because with a bit of wallpaper paste, they'd make a great feature wall. Still, maybe not as striking as a wall of Qantas shares, which we got rid of before Geoff Dixon had his way with the airline (though thank the lord he didn't get his ultimate way, putting it into private debt burden which would have surely guaranteed bankruptcy and a first class kerfuffle).
Anyhoo, Albrechtsen has a fine old time regurgitating the Ruddster's attacks on capitalism, and unregulated shonky share salesmen, and the spirit and the letter of the law, comparing Lindsay Tanner, Wayne Swan and the Ruddster to Storm financial advisers.
Janet delivers up some mighty fine sections of the Corporations Act, including section 726, section 734, section 769C, and section 1041H, which really worked tremendously well in the case of Storm and should work tremendously well when applied to the hijinks surrounding Macquarie Bank and BrisCon (and what a fine name that is, how apt, how magical, and so much better than BrisConnections).
Poor Janet gets very upset about the way Rudd has presented the broadband proposal as my way or the highway, and worries about being tagged a luddite, the same way as keen rational minds debating the government's climate policies are climate change deniers or green extremists (yep, I bet that's the first time deniers and greenie extremists shared the same sentence, until they got together in the senate committee).
Where, she moans, are all the intellectually sceptical media hacks when you need them the most. And it's true the Murdoch press was strangely welcoming, even warmly embracing of the proposal when it first hit the news. The Australian gushed, while you could find this sort of guff in the provincial papers, like The Advertiser, which clearly knew no better:
Some will say the Government should not spend billions of dollars of taxpayers' money on the project.

However, the economic rationale is compelling.

Just as Australia needed to build the Overland Telegraph, the Snowy River Hydro Scheme and a network of national highways, we need high-speed broadband. It is one of the building blocks of future prosperity.

Creating a wholesale provider of the network should engender greater competition between retail telecommunication companies.

Telstra - understandably acting in its own interests - has done whatever it can to strangle competitors from using its network. This has led to a regime of inadequate service and continual complaints.

As always, the best last word is left to First Dog on the Moon, available in full form at Crikey: 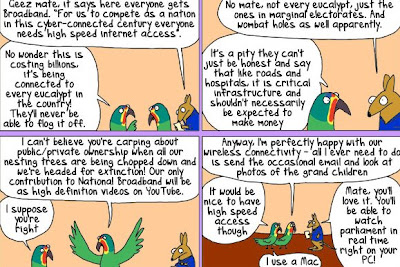 Posted by dorothy parker at 9:47 AM