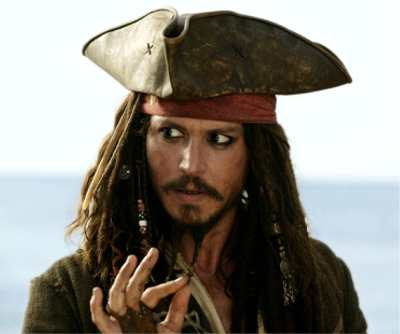 (Above: children - and women - please take note. This man is not a cuddly pirate). 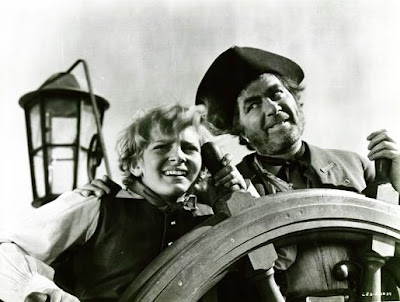 (Above: children, please do not cuddle pirates. Note how this man has the look of an international socialist, and drapes his hand casually over the shoulder as if he's a Catholic priest. Danger, Will Robinson).
What to do? How to write it up? There's that wretched Obama, lover of international socialism, authorizing the shooting of pirates.
How can this be? We all knew - well at least Piers Akerman and I did - that he was going to be the new Jimmy Carter.
How to get around him telling the Navy to take out a couple of Somali pirates? Easy: Let the cannonball fly and hang them high.
That's right, talk up your toughness from the comfort of a computer keyboard, and then slam the Obama administration:
To date the Obama administration has attempted to fudge its commitment to fighting forces opposed to the US.
Sure. Like increasing troop numbers in Afghanistan.
Thereafter the fat owl of the remove fills up his column with a re-hash of pirate history, starting with the revelation that the Pirates of the Caribbean movies are mis-leading. Real pirates are not cuddly criminals.
Well wash down my corn flakes with milk, that's the sort of insight I'd pay squillions to have at breakfast time.
Then it's off with a bout of vainglorious boasting and idle dreaming about the good old days when Britain ruled the waves. " ... pirates weren't tolerated. If captured alive their trials were short and their sentences terminal. Hanging was the norm."
Yes those were the days when you could keelhaul a man as soon as look at him, as shown by Captain Stephen Decatur's decimation of the Mediterranean pirates, and Captain Hay of the Columbine taking out some south east Asian pirates.
The West has forgotten some hard-learnt lessons on dealing with pirates. They are worth revisiting.
So much easier to ramble through the past than deal with a leftie socialist president who orders the taking out of a few pirates. Never no mind taking a look at Somalia, the conditions there, and what might be done about a failed state which provides haven for the pirates.
No, for that kind of insight, you have to turn to the fat owl's comments section:
Your modern day pirate, especially these darkies just do not have that gene (of giving quarter). They are brought up in terrible circumstances where life is less valuable than a goat, fathers murdered, sons pressed into the army and mothers and daughters raped. It is a terrible situation but this the reality of Samoa today. I have always believed that the word of God will bring peace and harmony to all corners of our planet but even countries like Samoa and other places, such as those overun by Muslims, have turned away from our Lord or worse denied his existance.
Samoa, Somalia. Meh, whatever, somewhere you'll find a darkie, and there'll be pirates.
I particularly like CarlT's interpretation of the fat owl's call for hanging them high:
Reality check people.
In the pirates we are dealing with illiterate stone-age savages who come from a racial group whose average IQ is in the 60s (retarded). There is a reason why Africans did not invent the wheel, writing, or any system of government above the tribal level.
There is only one way to deal with these pirates that will make an impression on their dull minds: freaking kill them and the horse that they rode in on.
Warships should prowl the area with orders to engage and kill (notice I said kill, not capture) all pirates on sight.
Armed drones should prowl the sky with the same intent.
Merchantmen should carry a contingent of marines during their passage through this area, who would have orders to kill all pirates on sight.
If or when any pirates were taken alive, interrogate (aka torture) them until they reveal their home village or town.
Then . . . use either a fuel air weapon or a daisy cutter (depending upon the size of the target) to turn that village or town and all its inhabitants into a smoking hole in the ground.
Nothing less is going to get through to these people.
Anything else will be viewed as weakness and they will continue to laugh at the foolish and weak white man . . . and they will be correct to do so.
Now there's a diplomat at work. Well I guess the fact that we all came from Africa way back when explains just why the world is totally stuffed - we're all Africans like that Obama dude, even if he was born in Hawaii - and that's why we've all got low IQs.
But of course it's all the fault of the left when you come to think about it:
The Left are very poor protectors.
Whether the threat is moral, cultural or military, the Left are poor and inadequate protectors.
This is because the Left is all about young-hearted dreaming.
Leftism is not a mature vision of life.
Leftists do not understand the realities of this world.
Borders.
The Left do not understand why strong borders are needed - in fact they resent strong borders.
Of moral borders - the Left is more permissive than the Right.
Of cultural borders - the Left favour excessive multi-culturalism - this inevitably weakens the host culture (the host culture can in time become unrecognisable).
Of national borders - the Left favours weak border protection (John Howard was persecuted for strongly protecting our borders).
The rise of the Left leader Obama means America and the Western World are now less safe on all levels.

Gee, thanks for that JJ. I can now see that the staging of Hair led directly to the abundance of piracy in Samoa.

Nothing to quibble about here, all splendid insights folks. But poor old Greg of Cooparoo in Queensland hits a sour note:

For once, Piers managed to write an article about a real world problem and not blame the ALP for it!

Is this an Easter miracle, akin to someone who was allegedly murdered on a Friday afternoon and rumoured to have rose from the dead 2 days later?

To which the fat owl had a most satisfying retort:

An idiotic note from a proven idiot.

Unfortunately Greg seems to have missed the comment by DD Ball of Carramar, noting that under Rudd Australia is not compromising, but being compromised. Now that's much more to the point. And there's one other minor problem Greg, most of the fat owl's musing wasn't actually about a real world problem, it was a stroll down memory lane, about piracy in the days of yore. It seems the fat owl doesn't quite know how to react to a US President authorizing a little high seas action, at least if he's a died in the wool internationalist UN loving socialist. Nor does he have a clue about what might be done about Somalia, a rogue state since the early nineteen nineties.
Better to escape into the past. But to get a taste for that, and for the mythology of piracy, why bother with Piers Akermann when you can settle down with Robert Louis Stevenson and Treasure Island?

(Below: continuing Piers' guide to pirates and piracy. Children, please take note, these are very dangerous pirates, who sailed out of Botany Bay way back in the fifties. Yes, just like Samoa, Australia had pirates too). 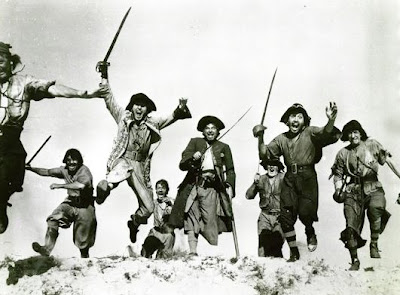 Posted by dorothy parker at 9:48 PM

Ha, such a tonic to re-start the work afer the Easter break!

Of course Piers forgets that the West never got rid of its own pirates, they all went into investment banking. Like the Python's Crimson Permanent Assurance, there's a proper diagnosis of the times we live in.

(Hmmm, free marketeer sort of rhymes with three musketeers. I feel like Ron H and his Thetans, there's a hidden thread running through the history here.)