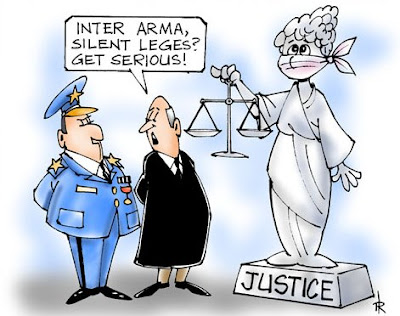 Damn you activist judges, damn you to hell. There you go again with your interventionist twaddle, upsetting Dame Slap, aka columnist for The Australian Janet Albrechtsen, just when she thought she'd finished her easter work by slapping down civil libertarians like Michael Duffy.
Stick to your day job, Chief Justice, is her pious cry, and now she's got the Chief Justice of the High Court, the wretched Robert French, in her sights.
It seems the doddery old dunce is very sincere in his believe that the native title system needs to be reformed, and somehow thinks he might even advise parliament  on the issues. But Dame Slap knows this is just a way of lapping up attention, and enjoying all the backslapping niceties of the gaggle of politicians, activists and lawyers who assembled under the Australian Law Reform Commission's journal's scribble fest entitled "a new vision for native title."
How dare the dusty old judge chip in! I mean, it's such utter cheek, submitting modest proposals to government, and the government in turn politely saying they'll consider it. What next? What happens when Dean Swift submits a modest proposal suggesting we cure our economic ills by selling starving children as dressed meat? What then?
But then the justice is not only a Labor party suck, it seems he's in favor of a treaty with indigenous Australia, and had the temerity to criticize the Howard government. Lordy, just one day after the Christ has risen, and we have to belt the judge back into an awareness that John Howard can do no wrong. And what happens to this French person when the voters decide they've had enough of Labor and decide to throw them into the gutter where they belong. What then for the cheese eating surrender judge French? And his free speaking, almost socialist ways:
In a speech at the University of Melbourne Law School a few weeks ago, French said that the previous Howard Government was wrong to treat a treaty as impossible because Aboriginal Australia was not a sovereign nation. The country’s most senior judge said that indigenous rights were recognised by the Mabo decisions and the Native Title Act without undermining Australia’s sovereignty and so could provide the basis for a treaty.

“Such an agreement could recognise and acknowledge traditional law and custom of indigenous communities across Australia, their historical relationship with their country, their prior occupancy of the continent and that there are those who have maintained and asserted their traditional rights to the present time,” he said.
Outrageous. Next thing you know he'll be drawing up the treaty himself. Of course the usual rabble of socialist cheerleaders joined in to celebrate the judge's contribution, with one clown even saying French was repudiating the scare tactics of those determined to shut down constructive debate about a treaty or agreement.
The gall of these people. An indigenous treaty is a hotly debated political issue. It could see Australia end up like Fiji, without a constitution and with a military dictatorship in place. Meddling in such divisive political debates is not what black-letter lawyers should do in their spare time.
Law reform's got nothing to do with being a judge, in much the same way as being a student in a school doesn't entitle you to carry on about education reform. You should just sit there, shut up and lap up whatever Dame Slap or any other teacher determines is good for you.
Don't give me that crap about Australia being a caring community of citizens. Activist judges are just one step short of radical ratbags determined to undermine the sovereignty of parliament, a job rightfully reserved for right wing ranters in The Australian.
Yep, there's good ol' Murray Gleeson, one time Chief Justice, and what did he offer to tackle during his retirement. French language skills!
What's that you say? During his time Gleeson spoke out against the use of torture, forced confessions and detention without trial, thereby delivering an outrageous slap on the cheek to our great and good and noble partner George W. Bush. If you want to, you can read about Gleeson rabbiting on about cultural values and immigration to the Annual Colloquium of the Judicial Conference of Australia in Canberra on 6th october 2006, under the title A Core Value.
But be warned, it isn't a pretty sight. Under the guise of not engaging in political advocacy or proselytising, the judge assumes an unwholesome independence:
Declaring the limits of the power of the other branches of government is not a task that leads to easy popularity, but judges are not involved in a popularity contest. Their job is to give practical expression to a hard-core value.
And just what is that hard core value ex-justice Gleeson? Explain yourself! The right to shoot off your mouth, and make things difficult for commentariat columnists?
Of course at the time there were the usual cheerleaders and legal eagles working to free terrorists who welcomed Gleeson's thoughts as persuasive and compelling and deserving of notice.
Damn you activist judges, damn you all. Why don't you just settle for locking up bikies, as instructed by the government, instead of this precious twaddle about giving practical expression to hard-core values, whatever that might mean.
Well done Dame Slap for explaining in your usual logical, coherent and rational way, why we should fear the law, and lawyers in general. Oh you trained as a lawyer?
Never no mind, we forgive you, but why do you keep holding up the law to ridicule by blathering on about the law in public. Why not just do it in private? What makes you think I should pay any attention at all to activist lawyers, considering some might actually get to plead a case or negotiate a cause before the highest courts in the land?
Let's get that gag firmly back in place, and not over the eyes please, over the mouth.
Dick: The first thing we do, let's kill all the lawyers.

Cade: Nay, that I mean to do. Is not this a lamentable
thing, that of the skin of an innocent lamb should
be made parchment? That parchment, being scribbled
o'er, should undo a man? Some say the bee stings:
but I say, 'tis the bee's wax; for I did but seal
once to a thing, and I was never mine own man
since.
Posted by dorothy parker at 4:07 PM