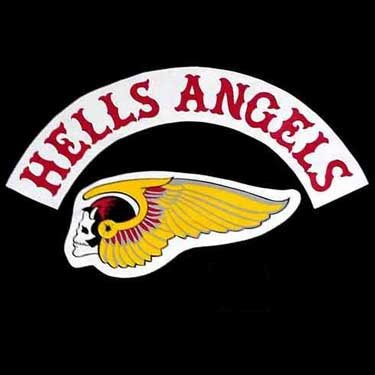 (Above: does printing an image like this in NSW now somehow constitute an association with evil doers, or at least prurient childish publicity for a criminal organization?)
It's smack down time between Janet Albrechtsen and Michael Duffy, though maybe that doesn't have the pure adrenalin charged, action packed excitement you might expect of a WWE world heavyweight bout with chairs, tables and kitchen sink.
You might remember that last week the Duffster made an impassioned plea for people to speak up about the new bikie-related NSW laws and the way they interfered with some basic human rights.
Most of the Labor lawyers and commentators who were prepared to die in a ditch for Bill Henson's right to photograph naked children have gone strangely silent in the face of the government's latest assault on civil liberty. It's a reminder that the biggest gang in town is still the Australian Labor Party.
Or Janet Albrechtsen, as the case may be, as she explains in Crusaders rely on lies. In answer to that Duffster's harumph, heeeere's Janet, and as usual she's got her knickers in a knot about crusaders for a bill of rights, and transferring power to the judiciary:
Take the anti-bikie laws that apply in South Australia and are soon to come into force in NSW. Civil libertarians claim these laws are egregious breaches of the right to freedom of association found in the Victorian and ACT charters of rights. No doubt they are right. And of course Cameron Murphy, president of the NSW Council of Civil Liberties, would say that “this is exactly the sort of tactic that is used in fascist dictatorships to alienate groups or political parties that the government doesn’t like”.

If, as the Victorian Police Association fears, drug-dealing bikies swarm across the border into Victoria to set up shop in Prahran instead of Petersham, could Victoria enact legislation similar to that in NSW? Technically, of course it could. Any lawyer would tell you that a specific anti-bikie law passed by the Victorian parliament after the charter takes precedence over the generally worded charter to the extent of any inconsistency.

But here’s where a charter morphs into a super statute, changing the ordinary rules. It is deliberately constructed to hamper the operation of later laws. Assuming that bikie fans don’t win in the first round by simply pointing to the charter as reason enough why such laws should not be passed, then it’s on to the second round when such laws are passed.
Hey Duffster the biggest gang in town is actually Janet Albrechtsen, a one woman whirlpool of death and destruction, perfectly happy with laws that are egregious breaches of the right to freedom of association. Perfectly happy for the sort of tactic used by fascist dictatorships, if drug-dealing bikies are the target.
Now you might think it supremely unfair, even stupid, irrational and overly argumentative, for Albrecthsen to seize this passing bikie-bashing moment in her own long running anti-bill of rights crusade, but she would of course stoop to conquer at any opportunity.
But it does make for an exciting libertarian, right wing loon re-match. Will devil may care, free up the drug trade, let the bikies associate, Michael Duffy the Determinator tackle the wily All In Annihilator Albrechtsen in a best of three cage match, bare knuckles, no biting allowed?
Actually I think Janet has a few others she'd like to get into the ring first so she can do a demolition job, before tackling a lightweight like the Duffster. She'd love to take out that preening prat Geoffrey Robertson, and happily give him two years hard for random free association on the basis that he's had the  cheek to accuse her of using purple prose in his new book The Statute of Liberty.
Indeed. Purple prose when hysterical rant would cover most of the bases. Shame on you Robertson, you plum in the mouth prat.
Here's a sampling of Janet in fertile adjective land: deeply infected, grand lies, falsehood, ruse, pompous prose, disdain, crusading elitist, subterfuge, and excuse the purple language, dishonest baloney.
Ah yes, reasoned, rational debate, leaving judges, civil servants, and hapless politicians trailing in her wake as she applies a scorpion death drop, jack-knife powerbomb and shooting star press to deliver a vertebreaker end game.
You see, what happens with all these human rights people is that they naively empower some Justice Murphy-type judge to overturn the new anti-bikie laws as some kind of Third World instruments of oppression that breach charter rights - when we all know that bikies are sub-human and need the shit kicked out of them.
Read my lips. The last thing you should ever, ever do is empower unelected judges to rule over us from some high bench of disdain.
That's why Janet gets terribly excited, that's why she's moaning with fear and rage, and lathering herself up into a frenzy about a bill of rights handing over exorbitant, extraordinary power to judges ... at the same time as getting wildly excited about the virtues of the NSW bill, which will hand over ... exorbitant, extraordinary power to judges ...
Yep the law allows for a court to proscribe an organization like a bikie gang. And of course the definition of organization is handily vague, allowing it to be applied to any organization intent on criminal activity, or representing a risk to public safety and order in the state (in the same way that the UK used its allegedly anti-terror laws as a handy way to freeze financial relationships with plucky little Iceland? Who knows?)
A Supreme Court judge can make a declaration to ban an organization without giving reasons, and once the declaration has been made, and published in the government gazette and one statewide newspaper, gang members who associate with each other can be charged without warning and face at least two years in jail.
So if a Justice Murphy-style rabid socialist with a prejudice against bikies and a love of Janet Albrechtsen gets to hear your case, not to mention a right wing judge with a distaste for criminal greenies and bolshie unionists and a love of Janet Albrechtsen, don't expect any sympathy.
Ah  yes, Janet's tremendously excited. It seems a bill that conclusively interferes with human rights will run into trouble in that silly Victorian state with its pesky charter of human rights, thereby demonstrating that a charter will transfer political power to the judiciary, except of course when politicians in the course of a normal anti-bikie bill transfer extraordinary powers to the judiciary, which makes it fine because it's been done by an elected politician, namely Nathan Rees ...
Hang on, I don't recollect voting for Nathan Rees. Come to think of it, I can't ever remember voting for the Labor party in NSW, though I am now so far lost in senility there might have been some time in the dark ages of Sir Robin Askin.
But run it past me again Janet - when the premier of a state who's never faced the voters as premier at an election hands over extraordinary powers to judges it's fine and dandy, if it's for bikie bashing, even if the powers so handed are so broad they can be applied in many and varied circumstances down the track. And the right of free association is up for grabs. But we should all fear fiendish judges being given fiendish powers by a bill of rights? Like in the United States?
Calling Michael Duffy, it's time for you to step into the ring. I give you about ten seconds, and then it's smackdown time for you, you purple prosed, pious, lefty liberal do gooder pinko socialist pervert. Bet it's the last time you blather on about assaults on civil liberty after Janet's had you in a boston crab hold for a minute or two ...