(Above: a hopeless blend of hot air and hubris from News Corp, publisher of The Australian. And there's plenty more of it if you can stand to go to a site which shows off Rupert Murdoch's huge holdings in hubris).
There's nothing like expertise in history and politics to allow you to pontificate on climate change, albeit you have to do it without much reference to science, but many splendid references to history and the Greeks and the gods.
Cue Greg Melleuish, exhibiting his own form of hubris in a column for The Australian entitled Hopeless blend of hot air and hubris.
Melleuish's thesis, to give it an academic status somewhat beyond its calling, is that we're all in the grip of hubris (which of course is a fairly different kind of town to scientific observation, scientific theory, and rational scientific argument).
The ancient Greeks invented the idea of hubris, of human beings having overweening pride and self-esteem that needed to be punished for its excess. There are perhaps those who believe that what is commonly called climate change is a punishment for hubris, for human beings having gone beyond their place in the scheme of things.

However, an equally good case can be made that the call for human beings to make far-reaching changes to their way of life in response to climate change is itself a form of hubris. To begin, it is based on the belief that human endeavours, in the shape of industrial development, have had such an impact on the Earth that they threaten to disrupt its environment on an enormous scale. Not only have humans made such an impact on the planet, they are also capable, through an act of will, of reversing that impact and setting things right.
Well of course Melleuish calls this sort of notion nonsense, and then reverts to a parable about ancient civilizations and rulers who claimed to be able to induce a beneficial climate by an ultimate sacrifice to the gods.
That's right modern scientists are little better than an evil, devil-worshipping, human sacrifice club, though we're still trying to discover if they favor ripping out the still pulsing, blood spurting human heart as part of their rituals.
Not of course that any of us are into name calling or  playing the man.
But okay, people can't affect the climate. Which is strange, since I thought that it was the activities of humanity that produced the hole in the ozone layer in the southern hemisphere, and it's depletion elsewhere, by the use of chlorofluorocarbons and bromofluorocarbons - person-made organohalogen compounds with dangerous free radical tendencies (so many radicals out there).
And we're now in the process of remedying that potential disaster, for a start by banning the use of these substances in their once convenient applications in refrigeration and industrial cleaning. Guess that's just another example of hubris.
If you accept the ozone affair has actually taken place, then it would seem that human beings can affect the planet. At that point the rest of Melleuish's blather, which is remarkable for its lack of reference to science, but its obligatory homage to Ian Plimer's recent book Heaven and Earth, becomes a truly academic exercise in pontificating pretentiousness.
If we followed his advice, we'd have done nothing about the hole in the ozone layer, we'd have  just let it grow, for fear of being accused of hubris, and instead embraced humility.
Humility can be seen as the antidote to hubris. Human beings should be humble in the face of the immense forces of nature and recognise that their power to manipulate and change the world is very limited. They can do this only if they recognise that adherence to climate change is the ultimate expression of hubris. There are times when the best thing for the state to do is nothing.
That's right, forget about the problems of the Murray Darling basin. Don't worry about water being in short supply. Do nothing about the potential for bushfires. Forget about pollution and human-induced tainting of the natural world. It's all just hubris and we don't have any affect on it, and we can't effect any change.
It's all hubris, a bit like a Greek tragedy, an exercise in catharsis and poetics. Oh and perhaps I should mention that the universe is so complex that there's simply no way for any computer model devised by a human being could capture its complexity.
And anyway, if we did something, it's likely to turn out quite harmful with its unforeseen consequences, even though we ultimately can't have any impact on nature, because to think that would be deluded and show a form of hubris.
Huh? Let me get that right. We should do nothing because we can't change anything, but if we do something, we'll change everything really badly.
Think how much worse it would be for us if it could be demonstrated that the process of global warming were outside of human hands and unable to be manipulated by human efforts. The most we could do would be to adapt to the changes that are occurring. It would be a huge blow to humanity's ego.

Human beings do not want to feel helpless in the face of such changes. They want to feel in control. Believing in climate change creates the illusion that they are in control, that they can do something to make a difference. If they have already affected the planet in such a profound way, surely they can do itagain.

If human beings did not have climate change they might find themselves reduced to being mere spectators in a cosmos over which they had fairly limited control. They would feel that their stature had been diminished. Put simply, they need climate change.

Dearie me, what an extended bout of wankery. With this little rant surely Melleuish has earned gherkin of the week for talking at length on a subject about which he demonstrably knows very little, at least if actual reference to actual science is any guide.
Put it another way, a little science can go a long way, but to write eight hundred words of metaphysical and literary tosh and humbug on a scientific matter is roughly equivalent to a scientist trying to explain catharsis and hubris through the use of quadratic equations.
Come to think of it, the scientist might make better sense. Well if it was a subbie who titled Melleuish's column, he got one thing right - talk about a hopeless blend of hot air and hubris. Though come to think of it, the subbie left out ill informed and ill argued ...
By the way, what is it with The Australian and its constant kicking of the climate change can, and deploying the likes of an historian to kick said can?
Haven't they caught up with the news that April is earth month in News Corp, and now they only have a couple of days left in which to save the world? Still over at the News Corp global energy initiative they have a delightful tale about the city of Reno going geothermal.
Way to go Reno, you're showing exactly the kind of hubris we expect from Rupert Murdoch, a man so full of hubris he thinks he can change the world.
Settle down Rupert, better follow George Melleuish's advice and do nothing. Who knows, if you did try to anything, likely it would make things worse off than they are right now. And believe me, everything is just so hunky dory right now ...
(If you still care, and want to see the details in the photo at the head of this piece, though only the lord would know why, the News Corp global energy initiative is here).
(Below: defiant George Melleuish, fierce crusader against Rupert Murdoch's hubris). 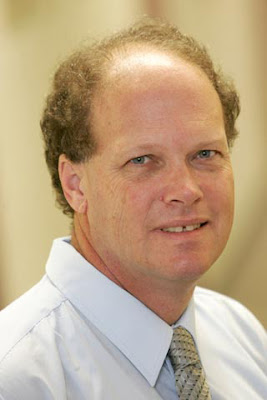 Posted by dorothy parker at 7:44 AM