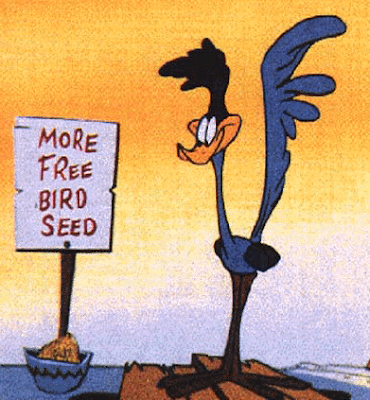 (Above: city broadband for the city slickers who think computer speed is equivalent to penis size).
You might have spent the last few weeks listening to the right wing commentariat berate all and sundry for Ruddstra, or Ruddnet, the federal government's plan to roll out broadband as if it was some kind of vital infrastructure like sewage and water and electricity and gas.
Well you might also have spent your time hitting your head with a hammer, admittedly a vastly more profitable and insightful procedure, since you probably ended up seeing the stars, while the commentariat could only see the mud below.
If there was one thing generally agreed, we had no need for fast broadband speeds, and anyway no one was going to pay for them even if they were available. Just do a quick fix up on the copper wires and all would be well.
Hold your horses there pardner. Who's that galloping up from yonder? Why it's Glenn Milne, and he's packing six shooters, and he's meaner than rattler with a headache. He's shouting something. What's that pardner, can't quite hear you?
What? Really? You don't say. It seems the bush is in uproar. They want faster broadband, and they've worked out that Ruddstra isn't going to deliver much in the way of faster speeds to them.
Just like those pig headed bushies not to pay attention to the commentariat. And worse, according to Milne, all the indignant folk are conveniently clustered in marginal seats, and mad as hell, and not going to take it anymore. Broadband's losers could vote Labor out, his column header screeches.
Well turn me upside down and hang me from a combine harvester. What a flip flop for the books.
Listen to these poignant tales from the wild frontier:
To say local newspapers have been venting the anger and frustration of voters in these areas is an understatement. Take the Tenterfield Star, in the marginal Labor seat of Richmond in NSW. It reported two weeks ago: "Villages and towns across the Tenterfield Shire have been left out of the federal Government's national broadband scheme."

After outlining the Rudd plan the Star continued: "This means that just under half of the Tenterfield Shire's residents that live in areas such as Jennings, Deepwater, Emmaville, Drake, Urbenville and Mingoola will not be included on the national broadband network."

Then there's The Gympie Times, which focused on Nick Smith the principal of a local Raine and Horne real estate franchise. The Times reported Smith was "was fuming when he found out that he wouldn't be able to get faster download speeds and Imbil and other smaller towns would miss out on Labor's rollout".
Dearie me, now I'm completely confused. At first I thought Rudd was going to be voted out because the broadband proposal was a scandalous waste of taxpayers' money, likely to bankrupt the country, without any demand, without anyone willing to pay the price, and symptomatic of a mindless Whitlam-esque government with grand schemes to build a pointless pipeline across the country with middle east oil money (I even heard Tirath Khemlani was making a comeback from the grave, so tempting was the scheme).
Now I'm told the Rudd government is going to be voted out of office because the broadband scheme isn't big enough or grand enough, that there's a tremendous demand in the countryside, and folk, especially wised up business folk like real estate agents, won't settle for measly 12 megabits a second when their city cousins are supposed to be scoring 100 megabits.
Oh it's a fundamental injustice, that's what it is. And the coalition is certainly going to exploit Rudd's vulnerability on this issue. That's right, the very same coalition that said Ruddstra was a load of unnecessary horseshit.
Quick, for god's sake, will somebody get the story straight. Are we going to have highspeed broadband for all, including the country, as a brand new coalition policy, or is this kind of socialist claptrap just more of the agrarian socialism we've come to expect from the Country Party (nee whatever they're calling themselves this week).
And will someone in the right wing commentariat please talk to Nick Smith, principal of the Raine and Horne real estate franchise in Gympie, and explain that he's barking up the tree of a socialistic fraud that threatens to bankrupt the country. All this talk about doing business via the intertubes, and even putting up lovely videos of homes for sale in 1080p 3D! Wanker!
Come clean Mr. Turnbull. Dance to the tune of the right wing commentariat and bury the broadband hopes of the bush!
Actually, joking aside, I have a great sympathy for the bush on this. If you live in an isolated setting, broadband is like chocolate ice-cream on a stick as a way of connecting to the world, and the faster the better. Once you get a taste of it, it's very more-ish, especially if you know how to walk on the dark side in search of entertainment.
The trouble is, connecting the bush in a far-flung country like Australia is expensive - the very pointy end of the cost stick - and the rural vote is largely lost to Labor, and the right wing commentariat has done its level best to diss and bury the new NBN, chiefly on the basis of its cost.
So tough luck bushies, get lobbying, but make sure you get the message across to the right wing clowns as well as the left wing ones, because the more you hear about broadband bankrupting the country, the more likely you'll be stuck on dial up well into Peter Cosello's first term in office, whenever that might be.
Oh and make sure you make special mention of Telstra advisor Henry Ergas and the clowns at Telstra who've done everything to make sure this country's broadband works now and well into the future like a good, solid, reliable steam engine.
(By the way, if you want to work out how Telstra dudded you, and their shareholders, courtesy of Sol and Donald McGauchie, take a gander at Michael Sainsbury's Telstra shareholders victims, and pray that things change).
(Below: Australian rural broadband speeds, now and forever after).

Posted by dorothy parker at 2:20 PM