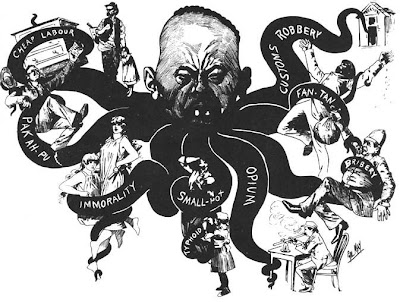 (Above: "The Mongolian Octopus - His Grip on Australia" - May Bulletin, 1886. And what about The Bulletin's proud masthead logo "Australia for the White Man"? Fair enough. After all, women were just a spare rib hanging around like useless, hysterical, always fainting chooks).
Being a slow day in loon pond - god spare us from the tedium of reading Gerard Henderson more than once a week - we naturally turn to Tim Blair's blog, and he's found, courtesy of the indefatigable Caroline Overington, a very funny quote from an Islamic loon about the way to handle mice. (What about computer mice?)
Some poor soul called Sam wrote indignantly wrote into Overington about fundie Christians trying to ban Harry Potter, or hating homosexuals, or the Catholic church excommunicating doctors who aborted a 9 year old rape victim. "All religions have crazy people in them. I don't judge christians by referring to psychotic killers that blow up abortion clinics. I'm not going to judge all Muslims because some random cleric made some stupid remark."
Overington naturally gave him a cheeky push (or was it a slap or an open handed punch) of a remark telling him Harry's banned in her house because of bad grammar. Fuck that's funny. (Oops, mustn't swear like Gordon Ramsay or it might mean the end of civilization as we know it).
What a spoilsport you are Sam.
Next Sam'll be telling us that a Muslim is the highest ever points scorer in the noble thuggee art of thugby league. As if ... you dropkick loser, you even handed, sanctimonious moderate. Islamics can't play sport, they're just people you laugh at. Y'know, they're funny figures, like black people, or two wongs trying to make a right, or liberals talking about the f'arts over a chardonnay or five.
So to counterbalance any sense that Islamics might be copping a pounding for their silly religious beliefs, I thought I'd go read Leviticus again. It's my favorite bit of the bible. The rules for slavery are particularly handy for CEOs and Janet Albrechtsen:
Both thy bondmen, and thy bondmaids, which thou shalt have, shall be of the heathen that are round about you; of them shall ye buy bondmen and bondmaids.
Moreover of the children of the strangers that do sojourn among you, of them shall ye buy, and of their families that are with you, which they begat in your land: and they shall be your possession.
And ye shall take them as an inheritance for your children after you, to inherit them for a possession; they shall be your bondmen for ever ...

Ah yes, heathen slaves for life. That's the kind of Judaic Christian underpinning that's the foundation for the western way of life, isn't it Peter Costello?
And the bit about shell fish has always appealed to me, though I'm a little disturbed to find I might be consigned to hell for eating camel the last time I was up in the Northern Territory:

I've always loved a bit of shellfish ever since. Christmas with lobster, and here we come hellfire. And who can argue with Homer Simpson about the divine splendor of pork. Be it bacon, or a nice roast with some crackling, or some pork ribs covered in the finest southern sauce ...

But you won't see the Bible or fundie Christian loons being sent up shitless at Blair's blog. Not the right demographic. Too many readers in that particular territory. Got to appeal to the marketplace as shamelessly as the front page showing off Hanson nudie pics. Like a cheap Hollywood producer giving the punters what they want. Islamic jokes.
Just the Islamics. Heck it's a surer way to get a laugh than when The Bulletin used to do its regular Chinamen routines back in the good old days, when a man was white, blacks didn't get counted, and women were useless airheads.
And no, it's not just the beheading Islamics who should be dragged out as an example of fundie loonacy, even though Blair loves to brood about decapitation (funny he doesn't seem to have the same thing going for defenestration).
Any funny Islamic will do, though last night I saw a great show about a guy in Wollongong who cut off the head of a 19 year old girl. Great entertainment, but I was gobsmacked the guy wasn't an Islamic.
And sure enough with the dog whistling in place, the Blair mice will come out to play, and be ever so funny and witty at the expense of dumb Islamics. I'd love to see Blair declare a 'let's make fun of the Christians' month on his blog. But he never will. He's too snide and smarmy and smart arsed in a clever dick way ...
But how's this for a bit of deep philosophical reflection from Toiling Mass, Blair botherer:
I wonder how many times the word "Kill" (and associated synonyms) occurs in the Koran and the Hadiths - and how much it is simply a matter of a culture, steeped in the above named texts, that has simply formed a habit of demanding things be killed.
Kill Jooz! Kill Infidels! Kill Mice! Kill Yourself while Killing Jooz, Infidels and Mice!
Good one, Toiling Mass. Number of times the word Kill appears in the Koran? Well who knows, but I can tell you it appears 146 times in the Revised Standard Bible, 118 times in the King James Version, and 218 times in the Douay-Rheims version - or so the fallacious intertubes say - not counting the times when god totally wiped out humanity (via the flood), or sundry disobedient tribes, or took pleasure in rampant destruction, or offered to wipe out the whole of humanity once again in the end times (currently six billion and rising, now that's some kind of holocaust). I reckon the Koran probably holds its own but it's pretty stiff competition.
You useless, dumb cluck, simple minded bigot.
Must go inside and lie down now for awhile. Feeling concussed by yet another encounter with inanity ... Overington, Blair and an Islamic fundie in one day, followed by a dose of biblical madness (the same chapter and verse source the christian fundies love to quote when gay bashing) ... it's all too much.
Got a feeling that Australia is about to be overwhelmed by Islamics the way we were in the nineteenth century by the Chinese. Fuck, who let them play Rugby League. And be good at it?
Might go down to Cronulla beach for a swim ... before it's too late. Yes, and pick up some takeaway Chinese on the way home ... that'd work ...
And welcome to a long and honorable Aussie tradition, Blair-ite loons:
(Below: "The Yellow Trash Question" - Hop in The Bulletin 1895) 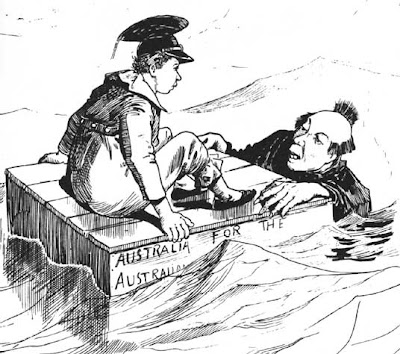 Posted by dorothy parker at 3:02 PM

Leviticus is a treaure - there is also the prohibition of preparing meals with milk (or products) and meat "for it is a shame & abomination".
This means no cheeseburgers or even butter meat sandwiches.
I wonder how often 'abomination' appears in the OT? I must pick up an old concordance next time I'm in a Vinnies or junkshop. They were all the rage in the late 19thC following the Education Bill of 1845 when even yoiks were getting larned and wnted to see for themselves whether what the dog collar brigade were frothing about was in the Bible.

Yep, for poetry Song of Solomon and Ecclesiates (and half the movie and novel titles in the English language), for an out there acid trip the Book of Revelation, and for the maintenance of thousands of years old farming practices, and irrational hatred of pork, Leviticus and the Koran. Deuteronomy has also got it in for the pig, but I'm with Homer - how can so many good things come from one animal?

There's one huge advantage for secularists (and for fallen Islamics and Jews), and that's a Sunday morning breakfast of eggs and bacon. I was amused to come across an Islamic defense of the pig ban titled "Pork is Sin and Sickness". Indeed brother and I intend to sin as long as the pork industry permits. Just love abominations.