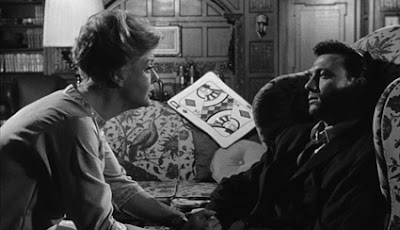 (The Manchurian Candidate: Kevin Rudd is played by Laurence Harvey, right, while Angela Lansbury, left, is a supplier of suits to Australian ministers. The large Queen of Diamonds card in the background is a subtle reference to the way all packs of Australian five hundred cards are now manufactured in China).
John Garnaut won't be welcome in loon pond with his scribbles for The Sydney Morning Herald under the title Red-peril hysteria fills Rudd vacuum:
Rudd has appeared embarrassed about his deep and clear-eyed knowledge of China and has shied away from leading intelligent domestic discussion. The vacuum has now been filled by vested interests, maverick senators and ageing cold-war commentators. The result is red peril hysteria.
Well yes, we're always on the search for intelligent domestic discussion, but what happens when we get Gerard Henderson, that prattling Polonius of a columnist, chipping in on the subject, albeit a few days late?
No place for Chinese whispers, his column's entitled, and you groan at the wit involved in that header. How about no place for Chinese burns, or no place for Chinese wedgies, or even no place for Chinese snide innuendo?
Anyhoo, Henderson promptly goes on to manufacture and confect outage at the way the Rudd government has had secret and furtive meetings with Li Changchun, fifth ranking member of the ruling Politburo, whose visit was so secret it also involved meetings with Malcolm Turnbull and various media poo bahs, including Maurice Newman, Mark Scott and Kerry Stokes.
Dearie me, you mean he didn't bother to meet with Gerard Henderson?
Well we know there's no smoke without fire, and there's plenty of evidence that the Rudd Government is in bed with China - except of course as Garnaut points out the one effect of all the recent nonsense and talk of spy storms has been to persuade the Rudd government to veto China Minmetals from taking over the flailing OZ Minerals on specious grounds.
Henderson is nothing if not predictable, painfully so sometimes, and as you'd expect he revives sweet memories of John Howard's wonderful way with China, developing close relationships with the communist dictatorship in Beijing, but also going out of his way to talk about the key democracies of the Asia Pacific - Australia, Japan and the United States.
Well that's about as sanctimonious, pious and foolish a sentiment as anyone could muster, since Japan and the United States are key players on the world stage. Why wouldn't you talk about them? And Australia? You mean John Howard went out of his way to talk about Australia? What a fine, sage politician he must have been, seeing as how as Australian PM he went out of his way to talk about Australia. Hallelujah.
As you'd also expect, talk of the wonderful Howard is just a build up to the many ways the Ruddster has fallen short, appearing as advocate for China, and depicting China as a solution and never as a problem.
Then our Polonius does a quick detour into the Fitzgibbon affair, mainly to muddy the waters, and berate security commentator Allan Behm for talking out of turn about alleged spying in the Minister by Defence Department officers.
Enough of that Allan Behm, you don't know what the facts are. Neither does our prattling Polonius so it's his turn to speak out before the facts are known.
It may well be that Fitzgibbon's current discontents were ignited by internal divisions within the Labor Party.
Indeed, and it might well be that his problems were caused by sending a very fine bespoke suit back to an unhappy Hong Kong tailor. Who knows, Henderson certainly doesn't, all he has is opinion, innuendo, suspicions, and yes it has to be said Chinese whispers. When in doubt blame the right wing of the NSW Labor party - a fine principle I adhere to myself because it never involves actual evidence, just cheerfully scurrilous gossip.
And it wouldn't be a proper prattle by Polonius if there wasn't a last sanctimonious outburst:
Australians have the right to know what our politicians are doing in China as well as when China's leaders are in Australia.
Does Henderson really believe that a list of meetings, in the style of the Governor General vice regal listing of who's turned up at Government House this week will tell us what the politicians are really up to as they manage our relationship with the country that currently determines our economic future? Or that half the argy bargy ever gets reported, or deserves to be made public in a welter of detail, as the situation changes by the minute?
Actually I would prefer Australians knowing that its politicians are handling the behemoth of China in style, and without an ersatz 'reds under the bed' scare campaign running as underscore in the background.
Dressing up the Ruddster as the latest Labor Party Manchurian candidate, mounting a red scare campaign about China, reverting to memories of Gough Whitlam and Chairman Mao, dribbling at the prospect of using Rudd's knowledge against him, and yes, it has to be said, speaking in Chinese whispers, is tragic.
It reflects the tepid level of insight going around these days as the right wing commentariet tries to find some kind of wedge, any kind of wedge, to try to derail the Rudd government. Sadly they even persuaded Malcolm Turnbull to try his hand at the nonsense, and as always these days, Malcolm in the middle came off sounding silly.
So, as we expect from our Polonius, a lot of prattling, and very little useful insight. After you've read Henderson, what have you learned about the hard core issues facing the Rudd government in its dealings with China? And the way Rudd's Mandarin speaking status is a two edged sword?
Well bugger all, since Chinese whispers are hard to hear and even harder to decipher. Have a read of John Garnaut to get some real insight ...
Posted by dorothy parker at 7:31 AM