John Pasquarelli, Revamping the Liberal Party, Revamping Australia, Hansonism and the migrant-less way forward for the land of the free 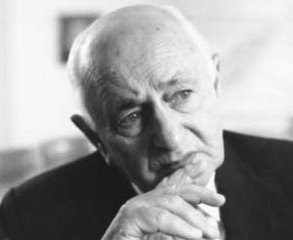 (Above: B. A "Bob" Santamaria. Who will ever forget his wonderful voice and his penetrating stare off into the distance on the telly way back when the Democratic Labor Party stood for a communist free, holy Roman Catholic Australia).

Every so often, a visiting loon flaps into loon pond, generating great excitement, much cawing and crying, and so it is with that now rare and exotic bird John Pasquarelli (so few sightings these days, it sends the spotters into a frenzy).
What better way to start out establishing your loon credentials than reminisce about how back in the 1990s you were having a cup of tea with Bob Santamaria and he predicted the implosion of the Liberal party, in the same way he managed to implode the Labor party. It took a little while to happen of course - some feller called John Howard ruled for a decade - but it's happening now, just like Bob called it. What a visionary.
John takes up the story in Libs out of touch from top to tail in today's Australian.
So what are the mainstream issues that the Liberal party needs to work on? Bet you guessed unemployment, the economic downturn, jobs, the budget deficit, jobs heading offshore to China, people feeling the pinch, superannuation failing, pensioners suffering, the health system in advanced decay, the education system suffering, kids not being skilled up to handle a difficult and uncertain world, the worries of a country facing extreme drought in the south eastern corner that was once the pride and joy of farmers and consumers throughout the land ...
Wrong, you bozos. You need to be flying the flag on:
1. The continuing Aboriginal industry (especially John Howard's useless make-work intervention scheme providing employment to the army, doctors, cops, so forth and so on).
2. Immigration (stop it now, right now)
3. Refugees (ship them back, now, right now).
4. Pacific Islander guest workers (especially rugby league players better than our own boys? Ship 'em out now, right now).
5. Multiculturalism (the cause of everything. Stop it, or we'll all go blind).
6. Militant Muslims (and don't let the moderates fool you. Remember every Muslim is a Militant).
7. Ethnic crime. (see 2, 3, 4, 5 and 6 - have you counted how many ethnics there are in Underbellies 1 and 2. Sure the women have great tits, but remember they're ethnic crime tits).
Great advice John. So what did Malcolm have to say?
As I watched Turnbull being sliced and diced by Labor's Tony Burke in parliament over his latest green obsession with "biochar" and the planting of millions of trees on farmland, I wondered what ordinary Australians were thinking. My emails to Turnbill's office asking him how he was going to sell Double Bay to "Joe Blow" remain unanswered.
Oh so that's why you complained at the start of the column about the Liberal Party's absolute lack of basics - like phone manners, returning calls and responding to correspondence. Compared to the Labor Party. You mean the Labor party responds to your emails? Lordy, what a professional team.
But there's worse news than that. None of the new poncy Liberals know how to get down and dirty, change a spark plug, grease a Holden, nail a piece of four be two. They're just a bunch of career politicians with a greenie tinge. The Victorian division has even changed its traditional "blue" letterhead logo into a leafy green. What's next? Bob Brown gets to run the party!!??
And then the shameful way they all treated that heroine Pauline Hanson. Heading up north to help her in her new campaign John? She'll need the help if we're to save Australia and revert to Hansonism. It wasn't until 1996 that John came to fully appreciate the implications of Hansonism:
... I began to receive calls from Indians, Filipinos, Asians (mainly Chinese) and Aborigines. They all supported, to varying degrees, what Hanson had to say but did not wish to be identified. Ted Seng, the Malaysian-born deputy mayor of Randwick, courageously outed himself by declaring he did not want Australia to be "Asianised, Americanised or Africanised". It didn't take me long to realise that most of these people spoke good English, were Christians and the product of assimilation. The Liberals had demonstrated themselves as political dills.
Sure enough, it was downhill all the way from there. Immigration became a shambles, and somehow we let in Africans - Sudanese, Somalians and Ethiopians, a disproportionate lot of 'em gangsters. Apparently Tony Abbott told John that the Sudanese were favored because they were Christians, but of course there were a lot of these Sudanese who were Muslims posing as Christians.
And what do you know, now the Liberals have a guy leading them who thought about joining Labor, following on from a guy who was an actual Labor party member. Not one of them has laid a glove on the greens over the Victorian bushfires.
So there you have it. The world economy is stuffed, and we're on the slippery slope to economic purgatory along with the rest of them. Meh, minor issues. In my day you didn't go looking for a job, you got out and chopped a bit of wood, boiled up a billy of tea, and ate off the land. Like the blacks, but not in a black way ...
Yep, it's time to bring Hansonism back. She's got the mind of a rocket scientist. She'll save Queensland first and then the world. All it will need is a bout of ethnic cleansing.
I fancy setting up "declaration" booths around the country. You have to trot along, declare you're of good working class stock, an ordinary Australian, speak good English, swear on the bible you're a decent Christian, provide evidence you've been assimilated, hug the flag three times, kiss it once, and sing Waltzing Matilda with a voice better than Kamahls. Within a year, we'll have this country sorted.
Now if only Malcolm Turnbull will return my emails so this can all get implemented at once ... seeing as how on an ordinary day I pass myself off as Joe Blow, when I'm not answering to the pet name Joe Blowhard.
(Below: Dorothy Parker in wax, in honor of anonymouse's fond memories, standing at the ready to help John Pasquarelli implement his forward-thinking agenda) 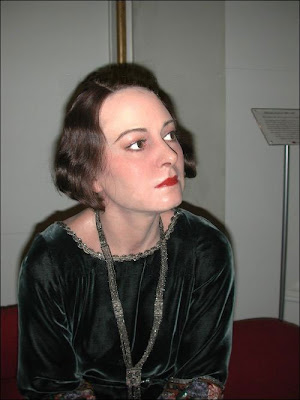