Piers Akerman, Glenn Milne, the Chinese peril from the north, and dangerous Chinese businesswomen who know powerful men and many secrets 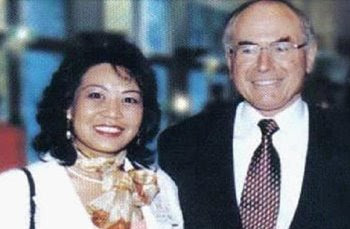 Gasp. The woman at the centre of a Spy Storm which spreads its tentacles as far as Kevin Rudd has also been photographed with John Howard.
Is there no end to the insidious Han dynasty invasion of our fair shores?
And what evidence is there that businesswoman Helen Liu's a spy? Well none we know of, but "Spy Storm" sounds so much better as a header. And after all she's at the centre of a top level espionage enquiry mounted by the Defence Signals Directorate (DSD).
That's right, the hacks in the DSD are suddenly transformed from vengeful leakers in conspiracy with Defence Department toadies who resent being licked into shape by a clumsy Minister (Glenn Milne March 28th) to top notch investigators on the hunt for a Chinese spy (Glenn Milne and Sharri Markson, March 29th). Here's a fine example of Milne and Markson wielding the egg beater in a bid to win the whipped potato award for the week: Spy storm reaches Rudd, Howard
Ain't it glorious what a Sunday paper beat up will do for headlines and circulation?
Why it seems the Ruddster has even spoken in Mandarin to this brazen hussy. He's even had a meal with her. Well we know what chow down means in Chinese, and we're not just talking dim sums.
It seems the Liberal party has long accepted donations from Chinese-born business figures. And so have the Labor party. The Greens are agitated. Barnaby Joyce is concerned. Those Labor sluts are sleeping with China and pretending they're just good friends. Ms Liu is connected to businesses connected to the Chinese government (and so are the other billion, but what the heck). Why she's even been photographed with former Chinese premier Li Peng in Sydney in 2002.
Talk about concrete evidence. Get the alarms working in central Sydney. The Chinese are coming. We're all doomed.
Trust our favorite Piers Akerman, notorious fat owl of the remove, to get in on this juicy game, though he seems strangely sedate compared to his usual Chicken Little ways. It's more a whisper than a shout that we're all doomed in his column Labor's Chinese whispering.
Could that have anything to do with his lord and master Rupert Murdoch's close ties with China? Didn't Rupert even up and dump his first wife and actually marry a Chinese-born businesswoman? Oh no, they've got to Rupert as well.
Never mind, the fat owl is indignant. The Ruddster is being secretive and furtive. The people have a right to know. The people demand answers. The people want Joel Fitzgibbon not just stung with a hornet, they want him flensed. And we want more than that Kevin Rudd's laughable article for the flailing Melbourne magazine The Monthly (curse you, you bloody Melburnians for your closet Brunswick street hippie socialist thinking and furtive trips into PolyEster Books to look at the freaky, trendy pornography). Does the Ruddster think writing trivia about glorious make work schemes for cultural benefit of Ozzies is going to fool us?
Chinese citizens who give hundreds of thousands of dollars to an Australian political party are of interest to the Australian people.
Chinese companies closely tied to the Chinese Government and the Chinese national interest moving to control a significant Australian export industry are of interest to the Australian people.
Darn right, and powerful billionaires in the grip of Chinese-born businesswomen, who like to conduct business in China and kowtow to the ruling elite and their business interests, they're also of huge interest to the Australian people. Launch a royal commission into News Ltd. I say. Not tomorrow, today!
Well you have to hand it to the fat owl, he trawls through whatever grubby grime he can find about the government's connections to China, and lays them out on a display tray, covered with a dash of chili, a hint of pepper, Szechuan style, and lashings of good ol Aussie paranoia about the yellow peril. Here's how tortured he gets:
(Madame Liu) ... may even know the Defence Minister's inner-leg measurement, having sent him a suit - which he returned a week later, apparently unworn.
Well that settles it, doesn't it. She might even know his inner-leg measurement, and we know what that means in China, don't we? Especially in relation to an apparently unworn suit.
Oh there's so much saucy juice in this spy scandal.
There are some 1338 million people in China, give or take a million or so. Businesswoman Helen Liu is but one of them.
Yet she is literally in the picture with a series of Chinese and Australian political leaders and there is little doubt that she is a person of considerable influence and knows a lot of secrets.
Rumor and vile innuendo and not a jot or whit of hard evidence to date. Just wonderful, glorious speculation.
The DSD dudes, and the Defence Department leakers have done tremendous work, and the hares are off and running, with the turtles in fierce chase. What's a bikie brawl, or a drive by or a killing or two, when you can have a Mata Hari out amongst the men?
That's why we need to investigate the man below and his links to China, not to mention his links to his Chinese-born wife. I have dozens of photos of the pair meeting with many powerful people all over the world, and I have deep suspicions that Wendi Deng knows many secrets. Say no more, a nudge is as good as a wink to a News Ltd reporter when powerful connections need to be exposed ... 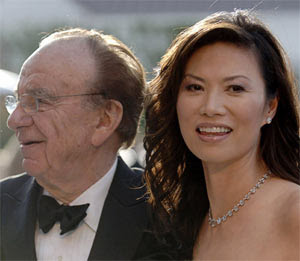 Posted by dorothy parker at 1:00 PM