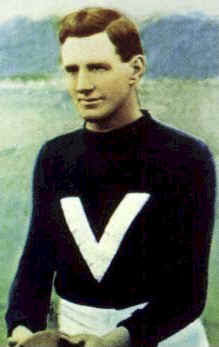 (Above: wipe a tear from your eye as you contemplate the noble Roy Cazaly, the man behind Australia's real war cry and Australia's truly rooly national anthem).
Having lived and worked in Melbourne, I can tell you that there's a special loonacy rife in the air right now.
When you first start working in the town, the first question is always 'what team do you barrack for?' If you can't answer it, lie, or you'll be a pariah. Sure it's as intelligent as asking a foreigner just off the plane what they think of Australia, but remember the questioner will be Victorian. And by definition as mad as a cut snake.
Whereas in New South Wales all people will wonder about is the next sex or booze scandal to rock the football industry, in Victoria there's a peculiar band of brothers, tortured intellectuals, who gather to celebrate the jocks as a kind of poetry in motion. They infest RRR, and they infest the further outreaches of red brick universities.
It's a kind of euphoric mania. After all, Footy really is more than just a game, and John Harms' paneygric to the game is so rich in textured loonacy, I just had to link to it.
As Harms fondly remembers his childhood, at each grand final there's teardrops on the cheek, a deep sadness, a strange melancholy. Because grand final time meant the season was over. And the Clag paste and the scrapbook would have to be put away until the next year.
Brooding about the bushfires, Harms ponders the question of whether football is just a comforting, handy distraction to all the pain and suffering.
Football is far more than a distraction and an escape. We have found far more meaning in footy than that. It is an affirmation of the realities - the joy and the suffering - of life. It is an affirmation of who we are and what we do. It is one of the ways this culture expresses the human truths.
Wow. What a pity Shakespeare never played footy. He might have written better plays with that kind of footy input. But wait, there's more than just human truths involved. There's a free set of truly emotional steak knives:
It is our call to action and effort, combined effort in the pursuit of the cup. It is our call to cast aside the tyranny of self for the sake of the team, to deny the ego and find the soul. It is our call to acknowledge the chaos of the game and the randomness of the bounce, and to still try to impose some will on the game. It provides us with our mythology of hope.

It is fun: it brings us together, friends and family, to eat and drink and celebrate and commiserate. And love. So, whatever our league, whatever our team, we are filled with child-like expectation again.

We turn towards the rising sun, and although our hearts know the daylight will not be long, and the shadows will fall, we still find hope, genuine hope, and you won't do better than that.
Dearie me. What to say when confronted with the full throated yearning cry of the Melbourne poet warrior footy loon? Barry Dickins, what did you start? What have you done?
Lordy lordy I have a strange compulsion to rush out and buy a jar of Clag and a scrap book, and head down to Melbourne for the winter and dwell amongst the chosen ones, that special band of weirdos who celebrate football in some weird lefty way - like Manning Clark, the historian, who was a football fanatic, like so many others, seemingly normal on the surface, but infected to the core with the VFL/AFL virus. Body snatched into pill on the paddock worship.
The pure poetry of the pill, the child-like joy, the bounce of fate, the tiggy touch wood penalties, the suffering, the ecstasy, the despair, the hope, the tears, the joy, oh the humanity, the humanity.
Second thoughts, maybe not. Maybe I'll just stay home and have casual sex with a passing stranger. To each their own, but if you stray into the deep woods of Melbourne during the depths of winter, be very, very careful. Somebody somewhere on a tram is likely to bore you for an hour on the beauty of the golden mark of the day.
And then somehow you will begin to think that the idea of the motherly football oval giving sustenance is somehow real and valid and viable. You've just entered the twilight zone, and there is no escape, until the sun passes the equinox and a semblance of sanity returns to Victorians.
And whatever you do, never, ever say, "but it's just a game of footy dearie, why not have a bex and a good lie down?" For then you'll have to listen to hours and hours of footy history and footy personalities and footy pleasures and footy poetry, like a hapless innocent trapped in the presence of a Mormon missionary trying to convince you of the truth of Joseph Smith ...
Ah Victoria, home to the purest, most poetic loons in the land. Like a jock without his strap, or a Richmond supporter without her beanie, how I miss you ...
(Below: oops the less Cazaly Ben Cousins in a portrait by Megan Roodenrys, currently on display in the Archibald Prize at the Art Gallery of NSW, entitled "Waiting for the Day", which my partner insists reveals the existential despair and loneliness of the long distance football player). 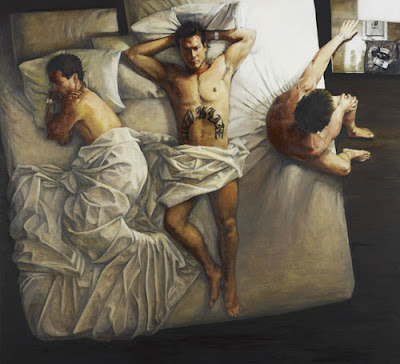 Posted by dorothy parker at 8:50 AM