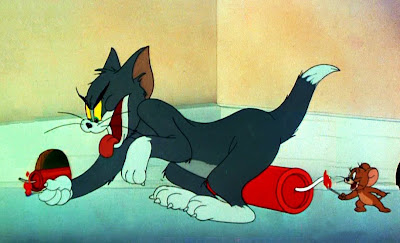 While the cat's away, the mice will play.
With Tim Blair in Townsville drooling over super cars, it's been left to the troops to carry on the dialectical discourse.
One silly stirrer has tossed a bone to the dogs, and they've gone into foaming, frothing mode. A contributor dubbed Draco - in homage to a constellation, a dwarf galaxy or a gliding lizard? - said:
The long-running campaign by the embarrassed right to paint Hitler/Nazis as left wing, has had a fatal blow delivered by the extreme right.
He linked to a story in the Sydney Morning Herald, featuring a claim that the Ku Klux Klan had infiltrated an anti-immigration party preparing to contest seats at the next federal election. (We have infiltrated party: KKK).
The party itself is one of those fringe rabble rousing groups clutching at the patriotic flag and name of convenience - Australia First (there's also another mob, the Australian Protectionist Party). It's a colonial version of the BNP, and you can assess the level of threat from these loons by the way the self-titled Kolonial Klan, which grandly announced its infiltration plans, claims to muster 20 members a meeting. Ooooh, scary.
But it led to a righteous bout of barking from the hounds:
Draco, did you read their platform? Utterly opposed to free markets and most other basic freedoms - critters of the left every bit as much as the Greens and the SWP. In fact they have a number of common platforms with Bob Brownshirt.

Surely there’s a soccer game somewhere you could be throwing flares at and punching on with some ethnically identical mortal enemies?
It's impossible to begin to assess the breathtaking ahistorical conflationary stupidity of this remark, so I won't bother. Except to note that Bob Brownshirt would likely have been rounded up during the days of the Nazi regime for his homosexuality and probably wouldn't do much better if the KKK were running the show.

Let's instead turn to the best remark, which came from Le Grognard, a pen name that hints at Napoleonic delusions of grandeur.
I’m sorry ... you do not make any sense. There is no reference to Nazis in your cited article.
Nazi: “Nazism, officially National Socialism(German: Nationalsozialismus), refers to the ideology and practices of the National Socialist German Workers’ Party under Adolf Hitler.” (Started in the 1930s)

The article talks about a completely different organisation. The KKK: “Ku Klux Klan, informally known as The Klan, is the name of several past and present secret militant organizations in the United States whose avowed purpose was to protect the rights of and further the interests of white Americans by violence and intimidation.” (Started in the 1860s).
To be honest, techincally there is no KKK outside of the USA, so I am not sure if this Palmer chap is even allowed to call his group that, or if he is some how violating a ‘copyright’...not that I really care.

However, as far as ‘Nazis’ go, the long running campaign to establish their bonafide left-wing, totalitarian tendencies and inclinations continues, and Draco, you should be embarrassed because you didn’t read the article.

The funniest line is the notion that the long running campaign to establish the bonafide left wing nature of the Nazis has any credibility, as if running a long running campaign is enough in itself. It's a bit like having a long running campaign to establish the scientific credentials of creationism, or a long running campaign to establish that dinosaurs were the favorite food of humans.
And it takes a particularly dumb level of conflationary tendencies to muddle totalitarian with left wing. As if the right can't also have totalitarian tendencies (come on down Dick Cheney). Or theocratic states for that matter. In fact the term was popularized in the twentieth century by the Italian fascists who took up the words of philosopher Giovanni Gentile (as always there's a wikipedia entry on the word). It then got applied to the Soviet Union.
The fact that Hitler deployed the term Socialism in his party's title doesn't in fact make him a socialist, at least if you have any understanding of the implications of Marxism. In fact big business flourished under Nazism and enjoyed considerable benefits from a docile labor force (and American big business loved to do business there). There was a lot of mutually pleasurable back scratching at work - even the so called volks car, the Volkswagon, ended up not in the hands of the volk, but in the hands of the Nazi bureaucracy during the war.
Hitler loathed communism - believing that it came from the mind of a Jew - and spent a considerable amount of energy attacking the domestic communists in Germany and their allies in Moscow. Which is why the pact with Stalin caused such consternation amongst the comrades - no doubt particularly bitter if you'd been herded off to a concentration camp as a reward for being a true believer.
You can really only suggest Hitler was left leaning by saying that the terms left and right - as applied by Hitler's contemporaries - had no actual meaning, so they may now be reversed, or applied as anyone might like and deem fitting. Especially by right wing nutters wanting to troll lefties by doing a little historical re-adjustment to the position of Adolf Hitler. This is the kind of nonsense peddled by Jonah Golberg in the United States, and it's interesting to see that Blair's blog seems to be a natural home for it here. By your followers shall ye be known.
But wait, there's more. Another troll, demeaning the name of the great French comic Jacques Tati, posted this:
Why was early Progressivism (early 20th century) so entwined with racism and eugenics? Anyone have ideas to share?

Here is what I’ve come up with by my little old self:

Racism and eugenics both flowed from the scientific fashion - which at that time supported the idea that certain races were higher on the evolutionary scale than others, and that eugenics could be applied to improve certain groups of human beings. Progressivism accepted these ideas easily because of its worship of science and its innate belief in the superiority of some over others. Furthermore, some of this was simply an expression of certain parts of the new American middle class, too - i.e., “All those lower class people - black or otherwise - are backwards, and we need to improve them.”
And he came up with it all by his little old self, which perhaps is just as well, because one barking mad person on the planet is enough. (if you want a better idea what deluded clowns mean by progressivism, again there's a wikipedia piece here). But you see how it works? Now we have progressivism responsible for racism, the Nazis, Communism, the KKK and the whole damn thing. And it's all the fault of science!
While the cat's away, the pinheads do play. But wait there's more, we haven't got on to climate change. Oh heck, why bother. The bible got it right a long time ago:
When I was a child, I spake as a child, I understood as a child, I thought as a child: but when I became a man, I put away childish things.
For now we see through a glass, darkly, but then face to face: now I know in part; but then shall I know even as also I am known.
And now abideth faith, hope, charity, these three; but the greatest of these is charity.

A dip into Blair's comments section is like a dip in a mugwump swamp, where no one seems to have managed to put away childish things, and anything that is seen is seen through a dark incoherent glass of muddled thoughts and ignorance.
What a fertile feeding ground for ratbags lies here ...
Vale John Hartigan, the man who announced that blogs were of such limited value as to be barely discernible from massive ignorance. Read the shit that goes out under your banner Mr. Hartigan ... read the shit. By your readers shall you be known ...
Posted by dorothy parker at 4:04 PM

I think anonymous above probably wants you to amend Niemöller's famous quotation: